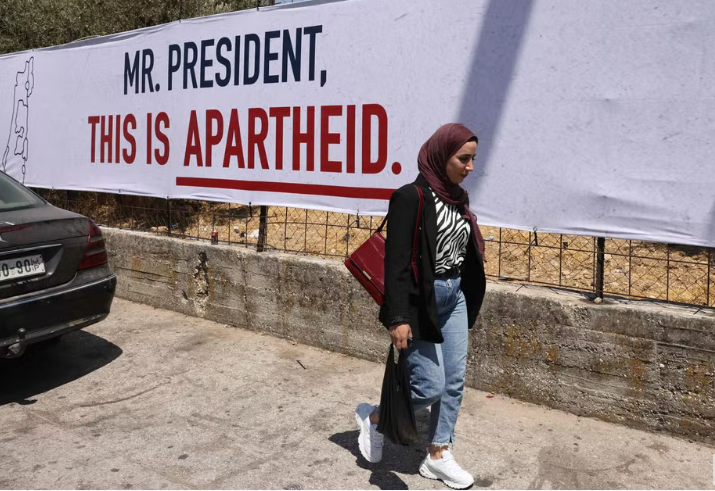 West News Wire: President Joe Biden has refuted claims that Israel practices “apartheid,” referring to it as a “democracy” and a “friend” while praising additional military aid worth billions of dollars.

On Wednesday, just before leaving for a trip to the Middle East, Biden was questioned about “voices in the Democratic Party” who believe Israel is an apartheid state and call for an end to unconditional US aid. Biden was speaking to Israel’s N12 News at the time.

“A few of them exist. I believe they are mistaken. They’re erring, in my opinion. Democracy exists in Israel. Our ally is Israel. Israel is a friend, so I don’t think I should apologize,” he responded, adding that his administration had given Israel’s Iron Dome missile defense system about $5 billion.

Though some Democrats, such as progressive lawmakers Alexandria Ocasio-Cortez (New York) and Rashida Tlaib (Michigan), have repeatedly slammed Israeli policies toward the Palestinians as an example of apartheid, Biden insisted there is “no possibility” of Democrats or Republicans ever “walking away from Israel.”

In May, Tlaib, a Palestinian-American, penned a statement accusing the Israeli government of “ethnic cleansing” against Arabs, while fellow members of the left-leaning ‘Squad’ argued that “apartheid states aren’t democracies” around the same time, apparently referring to Israel.

Just two months prior, the UN’s human rights body issued a report which concluded that Israel’s system “ensures the supremacy of one group over, and to the detriment of, the other,” particularly in the occupied West Bank, arguing that it meets the legal definition for apartheid. The report went on to state that Palestinians have been forced to “live behind walls, checkpoints and under a permanent military rule,” echoing previous findings by rights groups such as Amnesty International and B’Tselem.

Shortly after speaking with N12, Biden departed for his first trip as president to the Middle East, stopping first in Israel. He will meet with Israeli officials at the highest levels before traveling to the West Bank to meet with the Palestinian leadership. The main topic of their discussions is likely to be security. After that, Biden will fly to Saudi Arabia for a summit of the region, where he will meet with officials from Iraq, Egypt, Jordan, Kuwait, Oman, Bahrain, and the United Arab Emirates.

Biden said that American and Israeli ties are “bone deep” and that the two countries’ relationship is “deeper and stronger” than it has ever been during an arrival ceremony in Tel Aviv, Israel, on Wednesday.