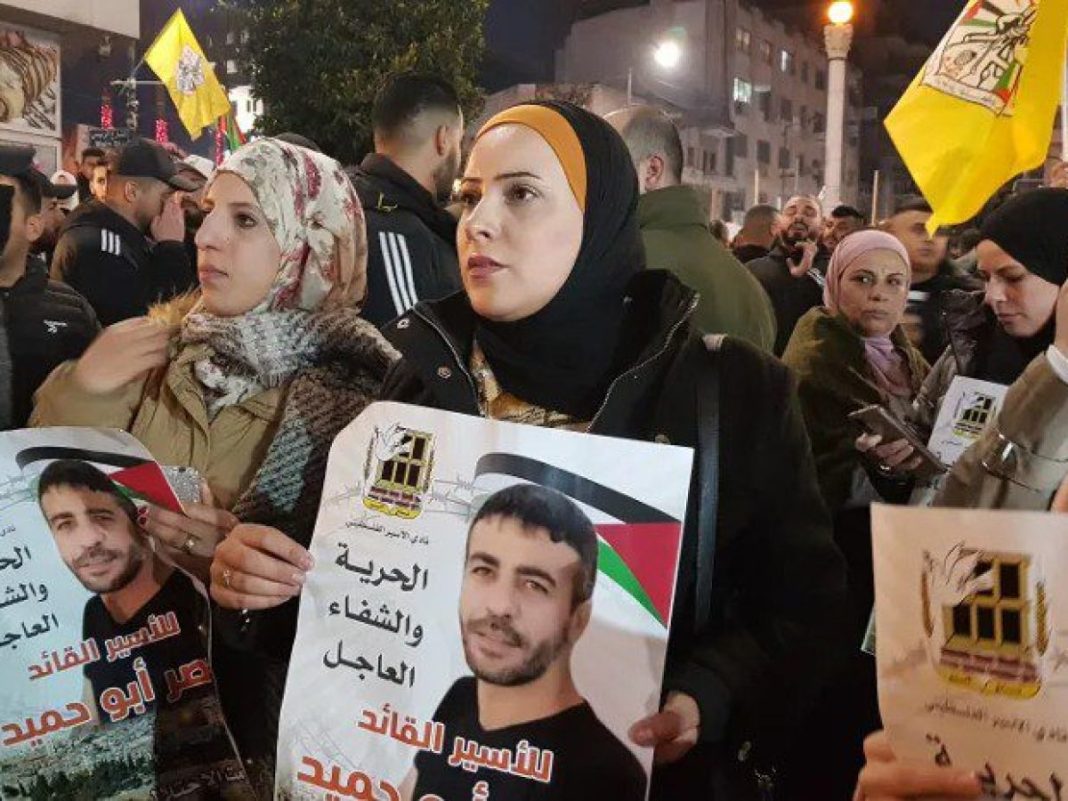 West News Wire: Despite repeated requests for his release and accusations of Israeli medical malpractice following his tardy cancer diagnosis more than a year ago, a Palestinian prisoner has passed away while still in Israeli captivity.

Nasser Abu Hmaid, 50, passed away on Tuesday morning at the Israeli hospital Assaf Harofeh close to Tel Aviv, according to the Palestinian authorities.

He was abruptly moved to the hospital on Monday afternoon from the Ramla jail clinic when his condition gravely deteriorated and he fell into a coma.

To mourn the passing of Abu Hmaid, businesses, schools, and stores shut their doors on Tuesday morning in the occupied West Bank, including Ramallah, Hebron, Nablus, and Jenin.

Palestinian Authority President Mahmoud Abbas said in a statement that Abu Hmaid was “martyred as a result of the policy of deliberate medical negligence” and held the Israeli occupation responsible.

Abu Hmaid was diagnosed with an advanced stage of lung cancer in August 2021 after Israeli authorities delayed the provision of medical examinations and treatment, according to Palestinian prisoner rights groups.

His family, prisoner groups and officials had since then launched a campaign calling on Israel to release him and warned that he was being exposed to “a slow death” through medical negligence. The family repeatedly said they wanted their son to die by their side.

Back in September, following months of chemotherapy, the Assaf Harofeh hospital said in a medical report there was nothing more it could do to save his life.

The hospital recommended that Abu Hmaid be released immediately and said he was “in his last days.” He was however sent back to the Ramla prison clinic and remained jailed.

His body has not yet been released to Palestinian officials, who said they are following up on his file at the highest levels, so a funeral procession could be held.

In a statement on Monday, the Palestinian Prisoners’ Society (PPS) said Israeli authorities “did not consider our requests for the release of the prisoner because of his difficult health condition”.

Dozens of Palestinians participated in a protest organized by political parties on Tuesday morning in the besieged Gaza Strip, against Abu Hmaid’s death and Israeli medical negligence.

Senior leader of the Gaza-based Islamic Jihad movement, Khaled al-Batch said the Israeli occupation is “fully responsible for the assassination of Abu Hmaid” at the protest.

“The continuous policy of medical negligence is a form of slow killing practiced against our prisoners. This will not pass without a price or punishment,” he warned.

The Palestinian Authority and the International Committee of the Red Cross had organised an urgent visit for his mother to the hospital on Monday evening, but he was in a coma.

Abu Hmaid was a former leader of the Fatah political party’s armed wing, the al-Aqsa Martyrs’ Brigade. He hailed from a family of refugees living in the al-Amari camp in Ramallah in the central Israeli-occupied West Bank.

He had been imprisoned since 2002 and was sentenced to life over his role in attacks carried out during the second Palestinian Intifada, or uprising.

Specialised doctors are not regularly available, except for dentists, and “over-the-counter painkillers are administered as a remedy for almost all health problems,” rights groups said in a joint report to the United Nations.

Sami Umour, a 39-year-old Palestinian prisoner, passed away in November 2021 as a result of a delay of several months in getting the urgent surgery he needed to treat his severe cardiac issues.

According to the PPS, more than 70 Palestinian detainees have died in Israeli prisons as a result of medical malpractice since Israel occupied the West Bank and Gaza Strip in 1967.

The majority of Palestinians consider those held in Israeli prisons to be political prisoners who are there as a result of either their resistance to or Israel’s military occupation.

Currently, there are 4,760 Palestinians being imprisoned in Israeli jails. This number comprises more than 20 people with cancer and at least 500 others who are afflicted with various illnesses.

Meanwhile, a contentious practice known as “administrative detention” is used to hold around 820 convicts.