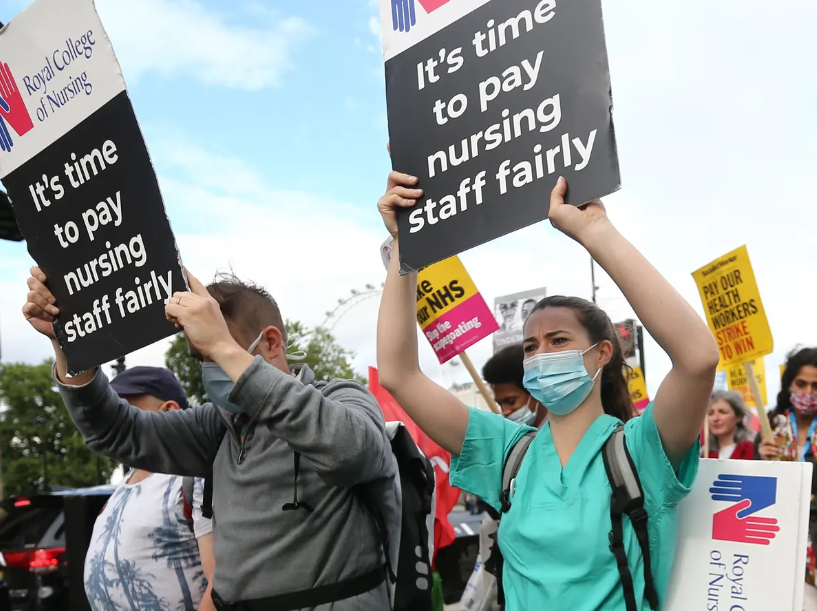 West News Wire: This winter, nurses in the UK will go on strike for the first time in the 106-year history of their trade union. Members at the majority of National Health Service employers have supported the strike action “in their battle for fair pay and safe staffing,” as the Royal College of Nursing announced on Wednesday.

Industrial action is anticipated to start before the end of the year, according to the trade union, which will soon disclose more specific plans and dates.

Emergency services and intensive care units won’t be impacted by the walkout, but it is anticipated to have an impact on ordinary medical appointments.

In response to a cost-of-living and energy crisis that has been made worse by sanctions imposed on Russia, the nurses are advocating for a salary increase that is 5% more than retail inflation, which currently surpasses 12%.

Health Secretary Steve Barclay expressed his disappointment over the planned strike. He took to Twitter to offer a reminder that the government has given “over one million NHS workers a pay rise of at least £1,400 ($1,600) this year on top of a 3% rise last year.”

“But union demands for a 17.6% pay settlement are around three times what millions of people outside the public sector will typically receive and simply aren’t reasonable or affordable,” Barclay emphasized.

Education Secretary Gillian Keegan, who was criticized earlier this year for sporting a £10,000 ($11,400) Rolex watch, added fuel to the bitter dispute.

Read More
Our country has been brought to its knees: Trump

Commenting on reports that some nurses are being forced to use food banks, Keegan told Sky News that such a thing normally happens when something breaks down, “either a relationship or boiler or anything.” She added that she doesn’t see “any point” in a strike by nurses.

Unions responded furiously to these remarks.

“Does Ms Keegan think we have 135,000 vacancies in the NHS because of break ups? Or is it the systematic underpayment of health professionals?” Rachel Harrison, the national secretary of the trade union GMB, said.

The Bank of England in its November report described the outlook for the UK economy as “very challenging” and predicted a prolonged recession.