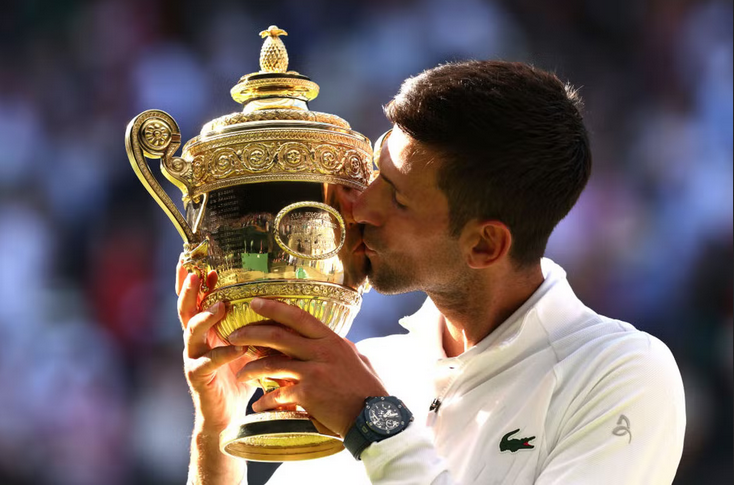 The top-seeded Djokovic said, “Every time, it gets more and more meaningful and special. It has always been, and always will be, in my heart, the most special competition. the one who encouraged and inspired me to begin playing tennis in a tiny Serbian mountain resort.

Djokovic, the top seed, extended his unbeaten streak at the grass-court Grand Slam tournament to 28 games and increased his career total to 21 major trophies, breaking a tie with Roger Federer and moving just one behind Rafael Nadal’s 22 for the most in men’s tennis history.

Among men, only Federer, with eight, has won more titles at Wimbledon than Djokovic. In the professional era, only Federer was older (by less than a year) than the 35-year-old Djokovic when winning at the All England Club.

There were two particularly key moments Sunday that went Djokovic’s way, ones that Kyrgios would not let go as he began engaging in running monologues, shouting at himself or his entourage (which does not include a full-time coach), finding reason to disagree with the chair umpire (and earning a warning for cursing) and chucking a water bottle.

In the second set, with Djokovic serving at 5-3, Kyrgios got to love-40 a trio of break points. But Kyrgios played a couple of casual returns, and Djokovic eventually held. And then, in the third set, with Kyrgios serving at 4-all, 40-love, he again let a seemingly sealed game get away, with Djokovic breaking there.

The 40th-ranked Kyrgios was trying to become the first unseeded men’s champion at Wimbledon since Goran Ivanisevic in 2001. Ivanisevic is now Djokovic’s coach and was in the Centre Court guest box for the match.

Kyrgios never had been past the quarterfinals in 29 previous Grand Slam appearances and last made it even that far 7½ years ago.

In some ways, the 27-year-old from Australia stole the show Sunday. He tried shots between his legs. Hit some with his back to the net. Pounded serves at up to 136 mph and produced 30 aces. Used an underarm serve, then faked one later.

All players representing Russia or Belarus were banned by the All England Club because of the war in Ukraine; among the men kept out of the field were No. 1-ranked Daniil Medvedev, the reigning US Open champion, and No. 8 Andrey Rublev. In response, the WTA and ATP professional tennis tours took the unprecedented step of revoking all ranking points from Wimbledon.

A woman who was born in Russia but has represented Kazakhstan for four years, Elena Rybakina, won the women’s trophy Saturday with a 3-6, 6-2, 6-2 victory over Ons Jabeur. It was the first Wimbledon title match since 1962 between two women making their Grand Slam final debuts, and Rybakina, at No. 23, is the second-lowest female champion at the All England Club since WTA computerized rankings began in 1975.

Federer missed the tournament for the first time since the late 1990s because he is still recovering from a series of operations on his right knee. The No. 2 man in the rankings, Alexander Zverev, sat out after tearing ankle ligaments at the French Open. Three of the top 20 seeded men, including 2021 runner-up Matteo Berrettini, pulled out of Wimbledon after it began because they tested positive for COVID-19.

And Nadal withdrew before he was supposed to face Kyrgios in the semifinals, the first time since 1931 that a man gave a walkover at Wimbledon in a semifinal or final.

Djokovic and Kyrgios have not always gotten along. Kyrgios was quite critical of Djokovic publicly until he became one of the earliest voices backing the Serbian during the legal saga that played out before the Australian Open in January, culminating in Djokovic being deported from that country because he is not vaccinated against COVID-19 (which also might prevent him from participating in the US Open in August).