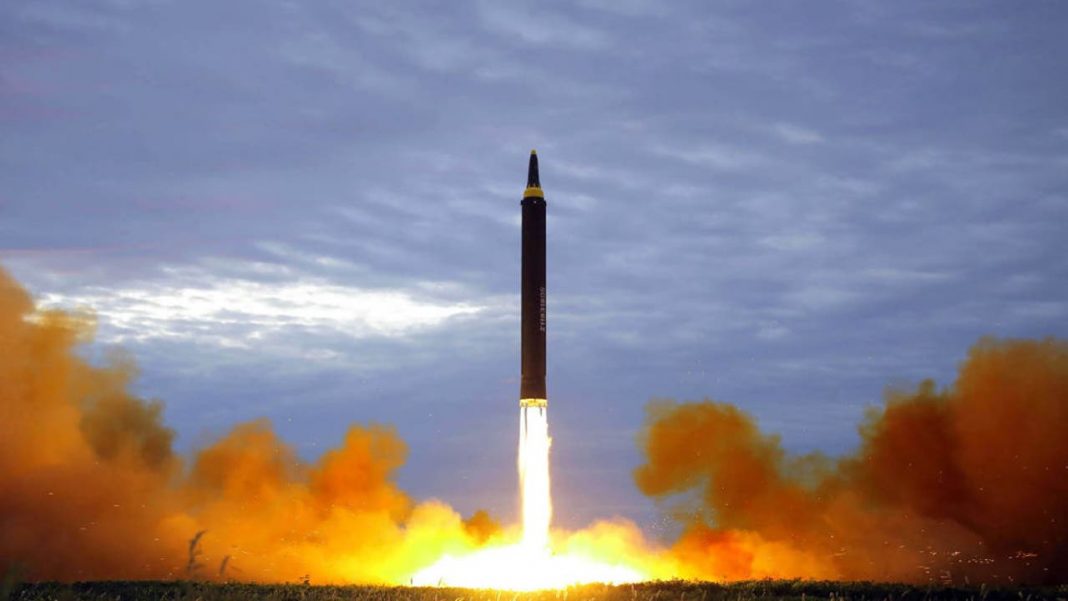 West News Wire: North Korea fired a ballistic missile into the sea on Sunday, according to its neighbours, in a restart of weapons testing as the United States and its allies concentrate on Russia’s invasion of Ukraine.

This year’s ballistic missile launch was the eighth of its sort. According to some experts, North Korea is attempting to develop its weapons technology in order to compel the US into making concessions such as sanctions relief in the midst of long-stalled disarmament discussions. North Korea may potentially see the United States concern with the Ukraine situation as an opportunity to ramp up testing without fear of a significant response from Washington.

The North Korean missile flew around 300 kilometres (190 miles) at a maximum height of 600 kilometres (370 miles) before landing off North Korea’s eastern coast, beyond Japan’s exclusive economic zone, according to Japanese Defense Minister Nobuo Kishi. According to him, no damage to vessels or aircraft has been reported.

“Such an act is completely unacceptable if North Korea purposefully carried out the ballistic missile launch when the international world is distracted by Russia’s invasion of Ukraine,” he told reporters. “Whatever the motivations, North Korea’s repeated ballistic missile launches are completely reprehensible, and we cannot ignore significant missile and nuclear progress.”

Officials from South Korea said they detected the launch from the North’s capital area and voiced “deep concern and great regret.”

During an emergency National Security Council meeting, top South Korean officials said the timing of the launch, during Russia’s invasion of Ukraine, “is not desirable at all for peace and stability in the world and on the Korean Peninsula,” the presidential Blue House said.

The U.S. Indo-Pacific Command later Sunday condemned the launch and called on North Korea to refrain from further destabilizing acts. A statement said the U.S. commitment to the defense of South Korea and Japan “remains ironclad,” though Sunday’s launch didn’t pose an immediate threat to U.S. territory and that of its allies.

The launch came a day after North Korea made its first response to the Ukraine war in the form of an article by a government analyst that expressed support for Russia and slammed the United States.

“The basic cause of the Ukraine incident lies in the high-handedness and arbitrariness of the United States, which has ignored Russia’s legitimate calls for security guarantees and only sought a global hegemony and military dominance while clinging to its sanctions campaigns,” Ri Ji Song, a researcher at a North Korean state-run institute on international politics, said in a post published on the website of the Foreign Ministry.

Ri accused Washington of “arrogance” and “double standards” because it describes its rivals’ defense measures as provocations or injustices.

The former Soviet Union was North Korea’s biggest aid provider before its disintegration in the early 1990s. Russian President Vladimir Putin has been pushing to restore his country’s ties with North Korea in what is seen as a bid to regain its traditional domains of influence and secure more allies to better deal with the United States.

Leif-Eric Easley, a professor at Ewha University in Seoul, said the Biden administration needs to show that it maintains a strategic focus on the Indo-Pacific region, including by responding sternly to Pyongyang’s provocations.

“North Korea is not going to do anyone the favor of staying quiet while the world deals with Russia’s aggression against Ukraine,” Easley said. “Pyongyang has an ambitious schedule of military modernization. The Kim regime’s strength and legitimacy have become tied to testing ever-better missiles.”

North Korea last month conducted seven rounds of missile tests, a record number of monthly launches since leader Kim Jong Un took power in late 2011. North Korea halted testing activity after the start of the Winter Olympics in China, its last major ally and economic pipeline, earlier this month. Some experts had predicted it would resume launches and possibly test bigger weapons after the Games.

Kim sent a message to Chinese President Xi Jinping after the Olympics calling for further consolidating bilateral ties “into the invincible one” in the face of what he called “the undisguised hostile policy and military threat of the U.S. and its satellite forces.”

U.S.-led diplomacy aimed at convincing North Korea to give up its nuclear program in return for economic and political rewards collapsed in early 2019 when then President Donald Trump rejected Kim’s calls for extensive sanctions relief in exchange for limited denuclearization steps during their second summit in Vietnam.

U.S. officials have since repeatedly called for the resumption of talks without preconditions, but Pyongyang has said it won’t return to the negotiating table unless Washington ends its hostility.