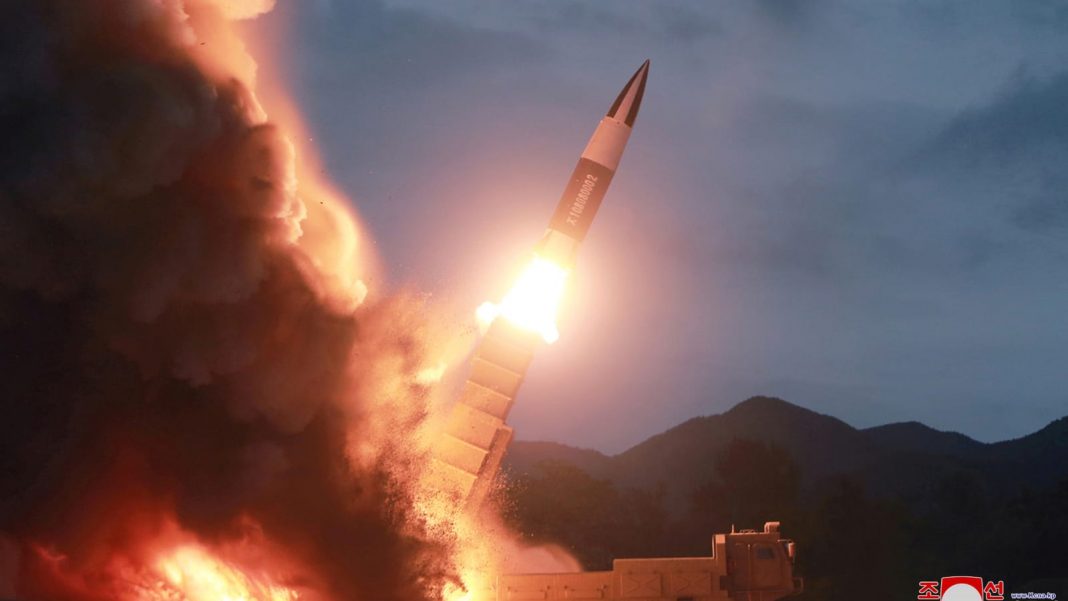 West News Wire: According to its neighbors’ armies, North Korea fired a ballistic missile into the sea on Saturday, extending Pyongyang’s string of weapons tests this year amid a prolonged halt in nuclear talks with the US.

The missile, which was launched from a location near North Korea’s capital, traveled roughly 270 kilometers (168 miles) eastward at a maximum altitude of 560 kilometers (348 miles) before landing in waters between the Korean Peninsula and Japan, according to South Korea’s Joint Chiefs of Staff. The launch was being thoroughly examined by US and South Korean intelligence authorities, according to the report.

North Korea conducted its ninth set of missile tests in 2022, taking advantage of a diplomatic hiatus to expand its military capabilities while putting pressure on the Biden administration.

The flight details roughly matched an earlier assessment by the Japanese military and were similar to North Korea’s previous launch last Sunday that was also conducted from the Sunan area near Pyongyang.

North Korean state media said last week’s launch was designed to test a camera system it plans to install on a spy satellite that is under development.

“The missile was fired just as the international community is responding to Russia’s invasion of Ukraine, while also in the middle of the Beijing Paralympics,” said Japanese Defense Minister Nobuo Kishi. He canceled an appearance at a military academy graduation to respond to the launch, calling it “absolutely unacceptable.”

The U.S. Indo Pacific Command said the launch did not pose an immediate threat to U.S. personnel or territory, or that of its allies. It called on North Korea to refrain from further destabilizing acts and said it was closely consulting with South Korea and Japan as well as other regional allies and partners over the launch.

Officials in Seoul convened an emergency National Security Council meeting and called on the North to refrain from actions that further raise tensions in the face of an international crisis created by Russia’s invasion of Ukraine, and at a time when South Korea is holding a presidential election.

They also vowed stronger cooperation with the United States to deal with the North Korean threat and more closely monitor its nuclear and missile facilities as well as a nuclear testing ground that had been active until 2017, Seoul’s presidential office said.

The launch came as South Koreans waited in long lines Saturday morning for early voting ahead of a presidential election on Wednesday. Two major candidates have clashed over whether South Korea should continue to pursue engagement with the belligerent North or take a harder line to check its nuclear threat.

Lee Jae-myung, the candidate for the ruling center-left party who has called for a conciliatory approach toward Pyongyang, criticized the launch but reiterated his commitment to dialogue. In a statement on Facebook, he promised he wouldn’t “tolerate actions that raise tensions,” without specifying how he would respond.

The North’s other tests this year included a purported hypersonic missile and its first launch since 2017 of an intermediate range missile with a potential of reaching Guam, a major U.S. military hub in the Pacific.

Analysts say North Korea could up the ante in coming months and possibly resume its testing of major weapons like intercontinental ballistic missiles as it tries to move the needle with Washington, which is now preoccupied with Russia’s invasion of Ukraine and regional competition with China.

“The (Kim Jong Un) regime may be unhappy with Washington coordinating global efforts against Russian aggression in Ukraine and disappointed with Seoul’s inward focus ahead of the South Korean presidential election,” said Leif-Eric Easley, a professor of international studies at Ewha University in Seoul.

During a ruling Workers Party conference called by North Korean leader Kim Jong Un last month, Politburo members issued a veiled threat to resume the tests of nuclear devices and ICBMs, which Kim had unilaterally suspended in 2018 to make room for diplomacy with then-President Donald Trump.

But negotiations have stalled since 2019, when the Americans rejected North Korea’s demands for major sanctions relief in exchange for dismantling an aging nuclear facility, which would have amounted to a partial surrender of its nuclear capabilities.

The Biden administration has offered open-ended talks with Pyongyang but shown no willingness to offer badly needed economic benefits unless the North takes real steps to cut down its nuclear weapons and missile program.

The North’s claim that it is testing camera systems for spy satellites suggests it could possibly conduct a banned long-range rocket test disguised as a space launch to advance its weaponry and apply more pressure on Washington.

Some analysts predict that North Korea will launch a rocket carrying a satellite ahead of a major political anniversary in April, the birthday of state founder Kim Il Sung, the late grandfather of Kim Jong Un.