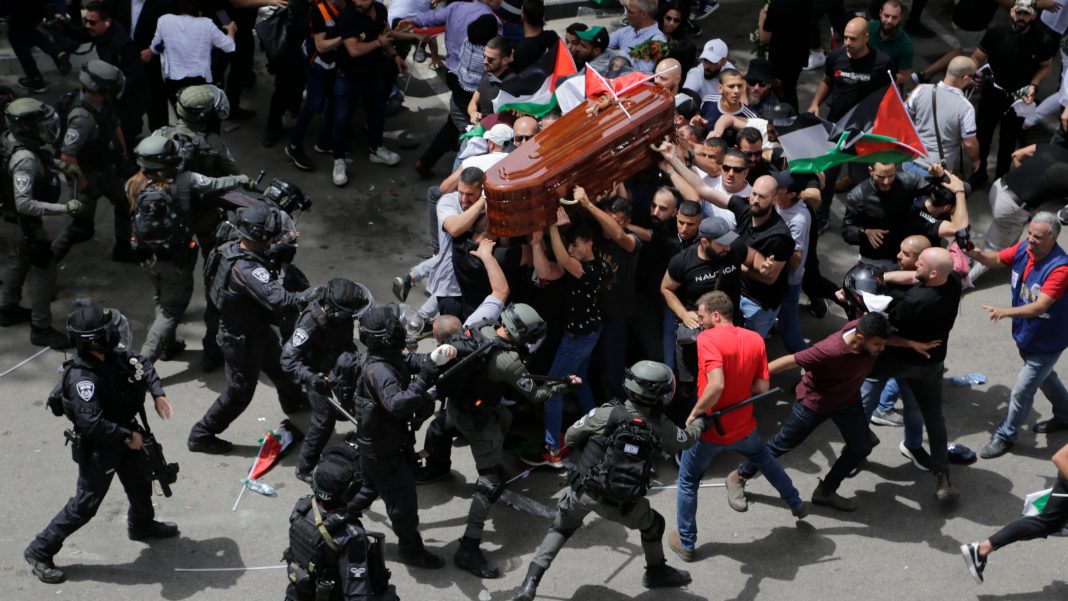 West News Wire: Despite finding police misconduct, an Israeli police investigation into the attack by its officers on mourners at the funeral of Al Jazeera journalist Shireen Abu Akleh has concluded that no one should be punished, according to sources who spoke to the Israeli newspaper Haaretz.

The attack on the pallbearers at the funeral, which nearly caused Abu Akleh’s coffin to fall, was broadcast live around the world, causing international outrage at what appeared to be an unprovoked assault.

On Wednesday night, the Police Operations Division presented its findings to Police Commissioner Kobi Shabtai, who had ordered the investigation in May.

The investigation was supposed to shed light on the chain of events that led to the officers attacking the mourners. The police chief has refused to release the report’s findings to the public.

Abu Akleh, a longtime television correspondent for Al Jazeera Arabic, was killed while covering Israeli army raids in the city of Jenin in the northern occupied West Bank.

Thousands of Palestinians attended her funeral last month. Several policemen charged towards participants and dispersed them with batons.

The Jerusalem Red Crescent said 33 people were injured in the attacks and six were hospitalised. Israeli authorities said six people were arrested after mourners threw “rocks and glass bottles”.

United Nations Secretary-General Antonio Guterres said he was “deeply disturbed” by the violence, according to a spokesman.

The European Union said it was “appalled by the violence in the St Joseph Hospital compound and the level of unnecessary force exercised by Israeli police throughout the funeral procession”.

Abu Akleh’s brother, Anton, has previously disputed an Israeli claim that mourners at the funeral had taken the coffin without the family’s consent, calling it “illogical and untrue”.

Haaretz said Abu Akleh’s coffin was initially slated to be carried by a vehicle through the procession, in agreement with police, but was instead carried by pallbearers on foot without permission from the police.

Police sources told Haaretz at the time of the probe’s launch last month that they supported the officers’ conduct at the funeral.

“Obviously the images that emerged were unpleasant and could have been different, but overall the police acted well in a complex and violent incident,” one senior police officer said.

The newspaper said the commander overseeing the event was a lieutenant colonel, despite such a sensitive event usually necessitating the supervision of a senior commander.

Anton Abu Akleh rejected out of hand the police probe into the unrest at his sister’s funeral.

“We don’t care what Israel says or does, everything is clear from the photos. The police are the aggressors,” he said. “They are trying to cover up their actions and mistakes.”