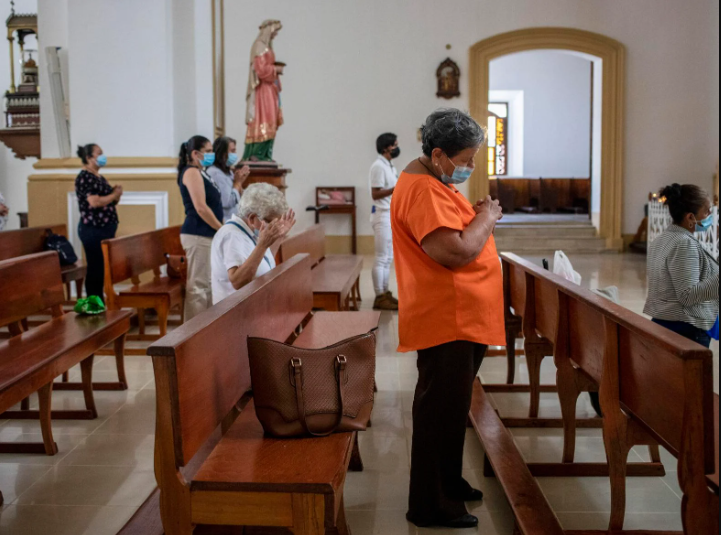 West News Wire: In a dramatic escalation of tensions between the church and a government that is becoming more intolerant of dissent, Nicaraguan police invaded the residence of a Roman Catholic bishop on Friday and detained him along with a number of other priests.

After Matagalpa Bishop Rolando Alvarez was charged with “forming violent gangs” and “inciting them to carry out crimes of hate against the populace,” Nicaraguan authorities conducted the dawn raid.

The administration of President Daniel Ortega has taken a methodical approach to suppressing dissent, arresting dozens of opposition figures last year, including seven people who might run against him for office. In short, secret trials held this year, they received prison sentences.

The congress, dominated by Ortega’s Sandinista National Liberation Front, has ordered the closure of more than 1,000 nongovernmental organizations, including Mother Teresa’s charity.

The National Police confirmed the detentions in a statement later, saying that the operation was carried out to allow “the citizenry and families of Matagalpa to recover normalcy.”

“For several days a positive communication from the Matagalpa diocese was awaited with a lot of patience, prudence and sense of responsibility, that never materialized,” the statement said. “With the continuation of the destabilizing and provocative activities, the aforementioned public order operation became necessary.”

It did not mention specific charges.

Álvarez was being held under guard at a house in Managua, where he had been allowed to meet with relatives and Cardinal Leopoldo Brenes, the police statement said.

The others who were taken with Álvarez they did not specify who or how many were still being processed, police said.

The Inter-American Commission on Human Rights condemned the detentions and called for the immediate release of those held.

Edwin Román, a Nicaraguan parish priest exiled in the United States said via Twitter: “MY GOD! How outrageous, they have taken Monsignor Rolando Álvarez, with the priests who were with him.”

Streets around the cathedral in Matagalpa were relatively empty Friday. A few parishioners prayed inside, where a picture of Álvarez had been pinned to the robe of a Jesus Christ figure.

María Lacayo said she felt “very sad because we know that our bishop is innocent and an excellent man.”

“We all love him very much because he is there for all of us and it’s a tremendous injustice what is being done to him. But as Catholics we leave everything in God’s hands,” she added.