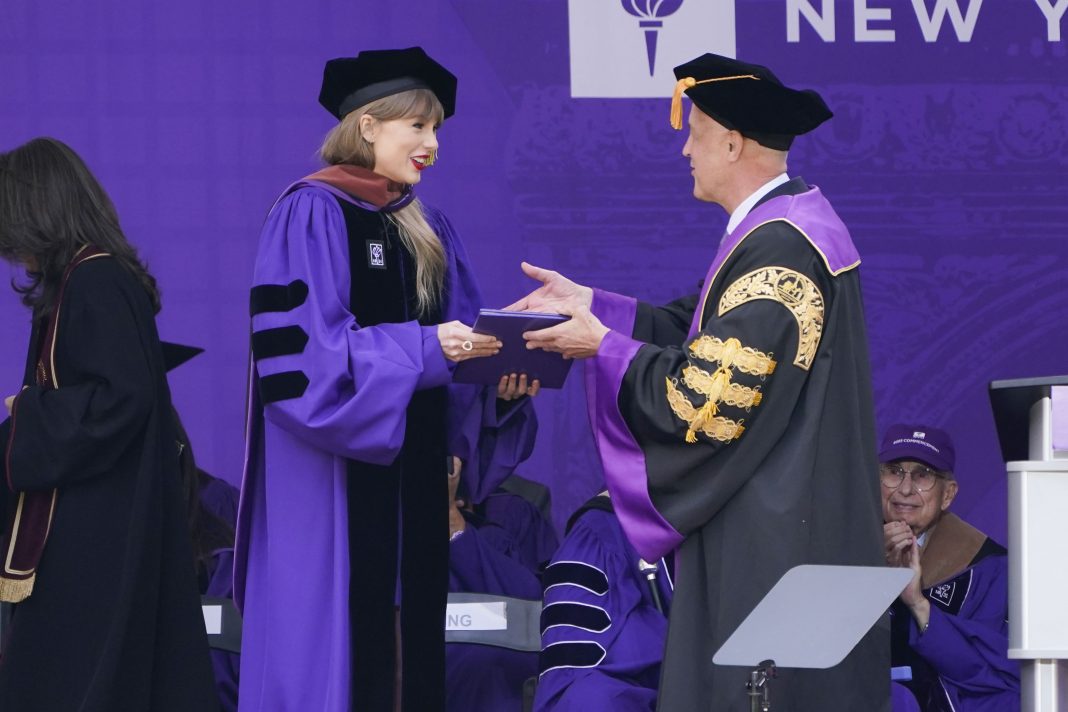 West News Wire: On Wednesday, the celebrity got an honorary degree of fine arts from New York University, kissing the crowd as she headed toward the stage at Yankee Stadium.

Taylor Swift has won numerous Grammy Awards, and she now has a new title: “doctor.”

Sporting her signature red lipstick and newly awarded honorary robe, Swift joked to the thousands of graduates assembled: “I’m 90% sure the main reason I’m here is because I have a song called 22.

“I never got to have a normal college experience per se. I went to public high school until 10th grade and then finished my education doing home school work on the floor of airport terminals,” Swift said in her commencement speech.

The singer-songwriter, producer and director said that she began her music career at 15, touring different radio stations across the country. She went on to sell more than 100 million albums and won album of the year at the 2021 Grammys for her album “folkore,” making her the first woman to win the category three times. Her previous wins came in 2010 for “Fearless” and 2016 for “1989.”

She winked at the crowd when Jason King of the Clive Davis Institute of Recorded Music mentioned her newly rerecorded albums, including “Fearless.”

Swift shared advice with the class of 2022 but offered the warning that, “I in no way feel qualified to tell you what to do. You’ve worked and struggled and sacrificed and studied and dreamed your way here today. I won’t tell you what to do because nobody likes that, but I will however give you life hacks for when I was starting out my dreams as a career.

Read More
Taylor Swift and Mom Andrea Donate $50,000 to Family Who Lost Their Father to Coronavirus

“Never be ashamed of trying. Effortlessness is a myth,” she said.

Swift concluded her speech by telling graduates that making mistakes is inevitable but “when hard things happen to us, we will recover, we will learn from it, we will grow more resilient because of it. As long as we are fortunate enough to be breathing, we will breathe in, breathe through, breathe deep and breathe out. I am a doctor now so I know how breathing works.

“I hope you know how proud I am to share this day with you,” she said. “We’re doing this together so let’s just keep on dancing like we’re the class of 22.”