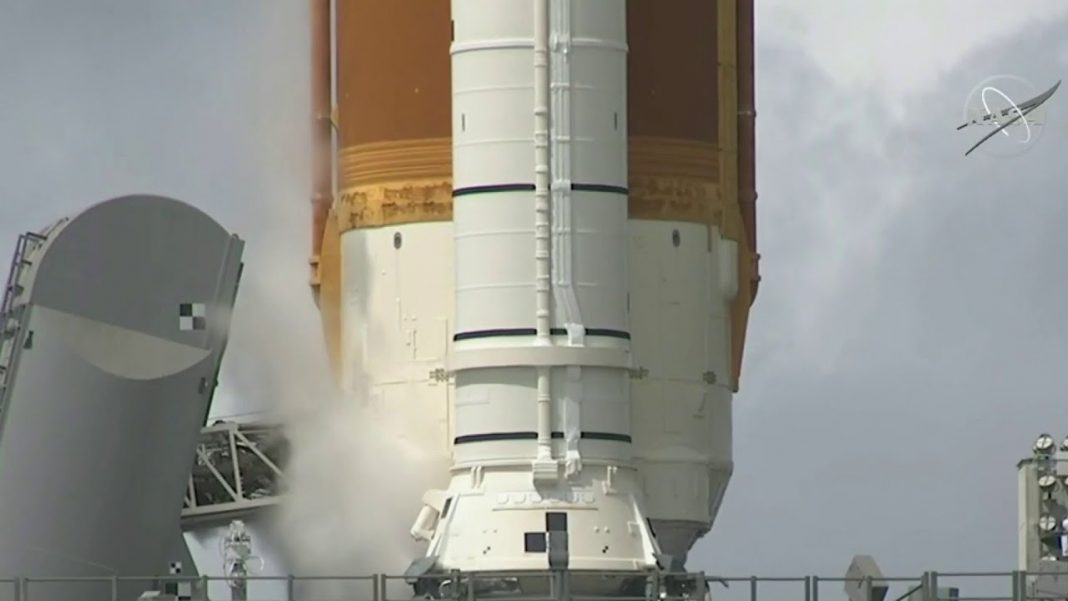 West News Wire: In a test on Wednesday before a potential launch attempt next week, NASA’s new moon rocket began to develop additional fuel leaks, but engineers were able to reduce them to acceptable levels.

Given the irregular nature of the hydrogen leaks, which have plagued the launch team for months, there was no quick determination on whether NASA would attempt a liftoff Tuesday.

Although she indicated the test went well, launch director Charlie Blackwell Thompson would not commit to a launch attempt date.

She said, “We’ll go look at the statistics. Before I make any assumptions, I’d like the team to have a chance to examine that.

The daylong demo had barely begun when hazardous hydrogen fuel began escaping at the same place and same time as before, despite new seals and other repairs. Engineers halted the flow and warmed the lines in hopes of plugging the leak, and proceeded with the test. But the leak persisted before dropping to acceptable levels. Hours later, another leak cropped up elsewhere, before tapering down.

Blackwell-Thompson said all test objectives were met. But managers need to review the results before determining whether the 322-foot (98-meter) rocket is ready for its first test flight, a lunar-orbiting mission with mannequins instead of astronauts.

Hydrogen leaks spoiled the first two launch attempts, as well as earlier countdown tests. So much hydrogen escaped during the countdown earlier this month that it exceeded NASA’s limit by more than double. Wednesday’s leak almost got that big again.

After hours of fits and starts, NASA finally managed to load nearly 1 million gallons (4 million liters) of fuel into the rocket.

Following the Sept. 3 launch delay, NASA replaced two seals in the leaky line. One seal had a tiny indentation; it measured a mere one-hundredth of an inch.

“Now that doesn’t sound like a lot, but again we’re dealing with hydrogen,” the smallest element on the periodic table, said mission manager Mike Sarafin.

NASA also altered the fueling process, easing slowly into the loading of the super-cold liquid hydrogen and oxygen. After Wednesday’s big leak appeared, the launch team moved even more slowly to subject the plumbing to even less stress.

In a separate matter, NASA still needs the U.S. Space Force to extend the certification of on-board batteries that are part of the flight safety system before another launch attempt.

Once launched, the crew capsule atop the rocket will be the first to orbit the moon in 50 years. The $4.1 billion mission should last more than five weeks, ending with a splashdown in the Pacific. Astronauts would climb aboard for the second test flight, dashing around the moon in 2024. The third mission, targeted for 2025, would see a pair of astronauts actually landing on the moon.

NASA’s Space Launch System rocket is more powerful than the Saturn V rocket that sent Apollo astronauts to the moon during the late 1960s and early 1970s. The engines and boosters are carryovers from the now retired space shuttles. Just like now, NASA struggled with elusive hydrogen leaks during the shuttle era, especially during the early 1990s.