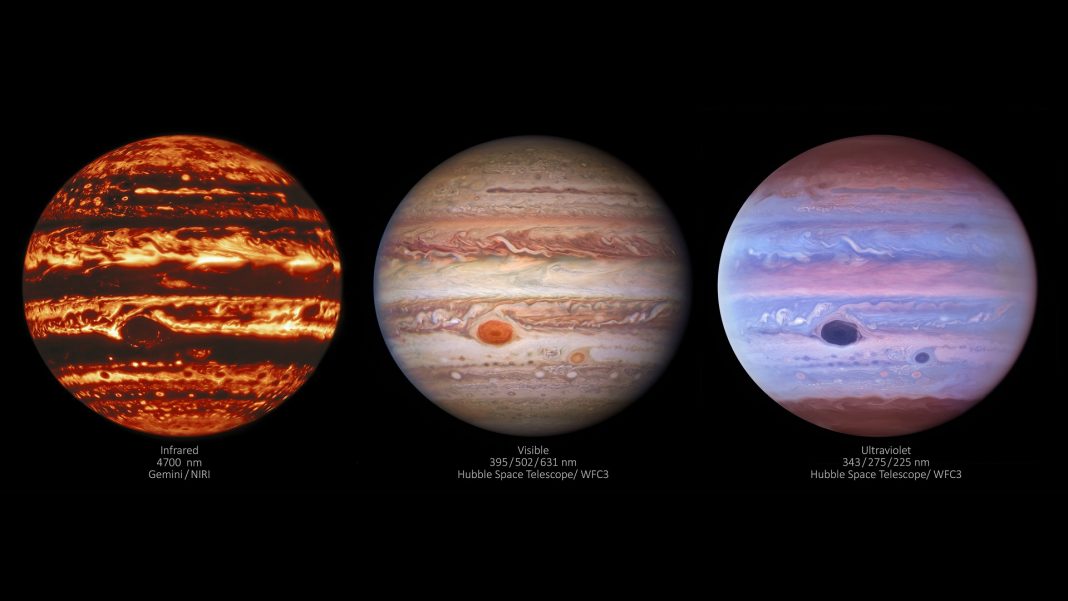 The photographs were taken by the telescope’s near-infrared camera, which detects objects in space using infrared light.

It can see celestial bodies like stars, nebulae, and planets that are too cool or too faint to see in visible light, or what the human eye can see.

The first depiction of Jupiter is a composite depicting the Solar System’s largest planet against “the dark background of space,” with swirls of various hues reflecting Jupiter’s chaotic atmosphere.

The vivid orange glows at the planet’s top and bottom represent Jupiter’s Northern and Southern Auroras, which are located at both poles.

Also shown in the image is the famous Great Red Spot, which can produce winds of more than 250 miles per hour and is 1.3 times the diameter of Earth, according to NASA. The image shows the spot as white because it is reflecting sunlight and sits at a high altitude.

The second image shows a wider view of Jupiter, including its rings, which are a million times fainter than the planet, according to the space agency.

Also seen are two of Jupiter’s moons  Adrastea and Amalthea which are located to the far left of the rings.

Although the rest of the image shows the blackness of space, there are fuzzy spots in the lower portion, which are actually faint galaxies glowing in the distance.

“We hadn’t really expected it to be this good, to be honest,” Imke de Pater, a professor emerita of astronomy, earth and planetary science at the University of California, Berkeley, who helped lead the observations of Jupiter, said in a statement. “It’s really remarkable that we can see details on Jupiter together with its rings, tiny satellites, and even galaxies in one image.”