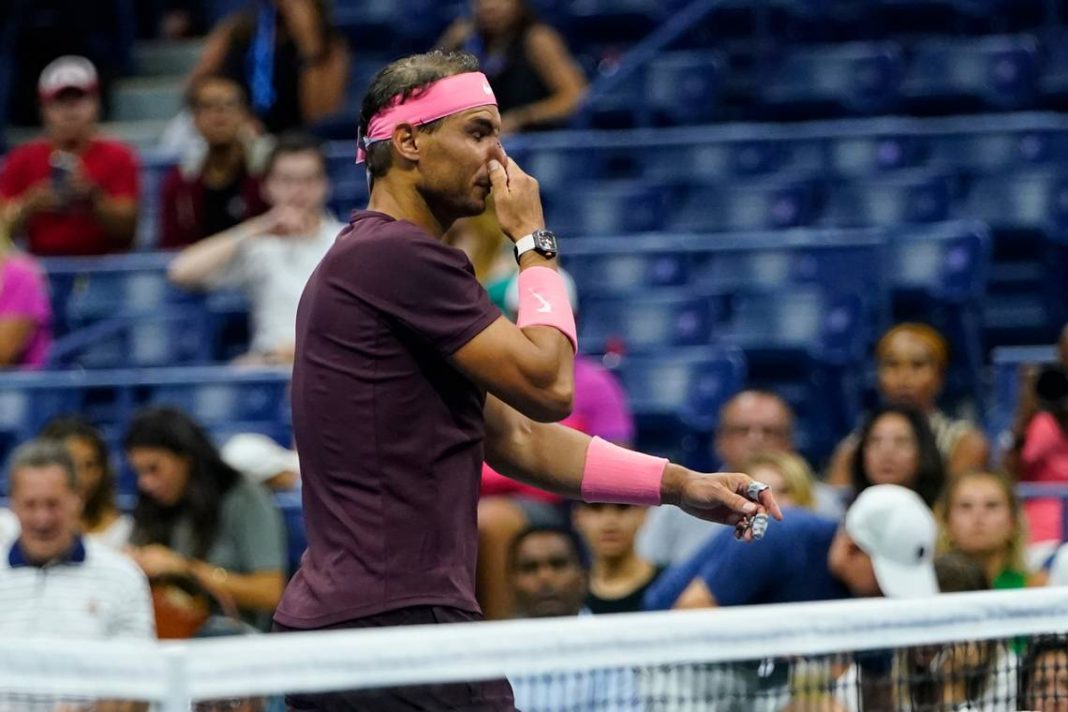 West News Wire: During his second-round triumph at the US Open, Rafael Nadal cut himself with his own racket as it ricocheted off the court on the follow-through from a shot, leaving him wounded and lightheaded.

In the fourth set of what would end up being a 2-6, 6-4, 6-2, 6-1 victory over Fabio Fognini at Arthur Ashe Stadium in a match that started Thursday night and ended after midnight on Friday, play was suspended for nearly five minutes during a medical stoppage.

It was a strange and momentarily frightening scene as Nadal groaned, dropped his racket, put his palm to his face, and then put both of his hands on his head. He said at his post-match news conference he thought right away that he might have broken his nose, which kept swelling.

He said it was a “shock” when it happened and he felt “a little bit out of the world.”

Still, Nadal managed to joke about it all. Asked during his on-court interview whether he’d ever had that happen before, he mustered a chuckle and replied: “With a golf club but not with a tennis racket.”

How was he feeling?

“Well, just a little bit dizzy at the beginning,” said Nadal, who has won four of his 22 Grand Slam titles at the U.S. Open, most recently in 2019, the last time he entered the hard-court tournament. “A little bit painful.”

The episode came on the first point of the game with Nadal leading 3-0 in the fourth set and clearly in command after ceding the opening set for the second match in a row this week.

The 36-year-old from Spain was moving to his right when he hit a backhand. After making contact with the ball, his racket deflected off the ground and smacked him on the nose.

He went over to the sideline and layed down, waiting for the trainer, and Fognini went over to check on Nadal.

“He told me everything was OK,” Fognini said later. “I hope it’s nothing serious.”

After having a bandage put on his nose, Nadal resumed play. He would lose that game, but not another, improving to 21-0 in Grand Slam matches in 2022.

Nadal won the Australian Open in January and the French Open in June for his 14th title there, then made it to the Wimbledon semifinals in July before the abdominal issue forced him to withdraw (which does not go into the books as a loss).

The match against Fognini, who beat him at the 2015 U.S. Open, did not begin auspiciously for Nadal. His shots were off and he quickly fell behind.

“For more than one hour and a half, I was not competing,” Nadal said. “One of the worst starts, probably, ever.”

The second set was hardly a thing of beauty for either man, filled with poor play by both: They combined for 39 unforced errors and merely nine winners, seven service breaks and only three holds.

“I was lucky, honestly, that Fabio made some mistakes in that second set,” Nadal acknowledged.

When Nadal dumped a backhand into the net, Fognini broke to lead 3-2, then went ahead 4-2. But from there, it was Fognini who faltered, missing four shots in a row to get broken at love as part of a four-game run by Nadal to make it a set apiece.

“With Nadal, you can’t mess around,” Fognini said. “I let him back in the match and he kept getting better from there.”

In the third, Nadal came up with one particularly perfect shot a forehand on the run that redirected an overhead by Fognini and sent it down the line for a winner to break for 4-2. Nadal’s momentum carried him right to the edge of the stands, where thousands were on their feet, and he punched the air and yelled, “Vamos!”

Not long after, that set belong to Nadal, too, and he would collect 16 of the last 19 games.