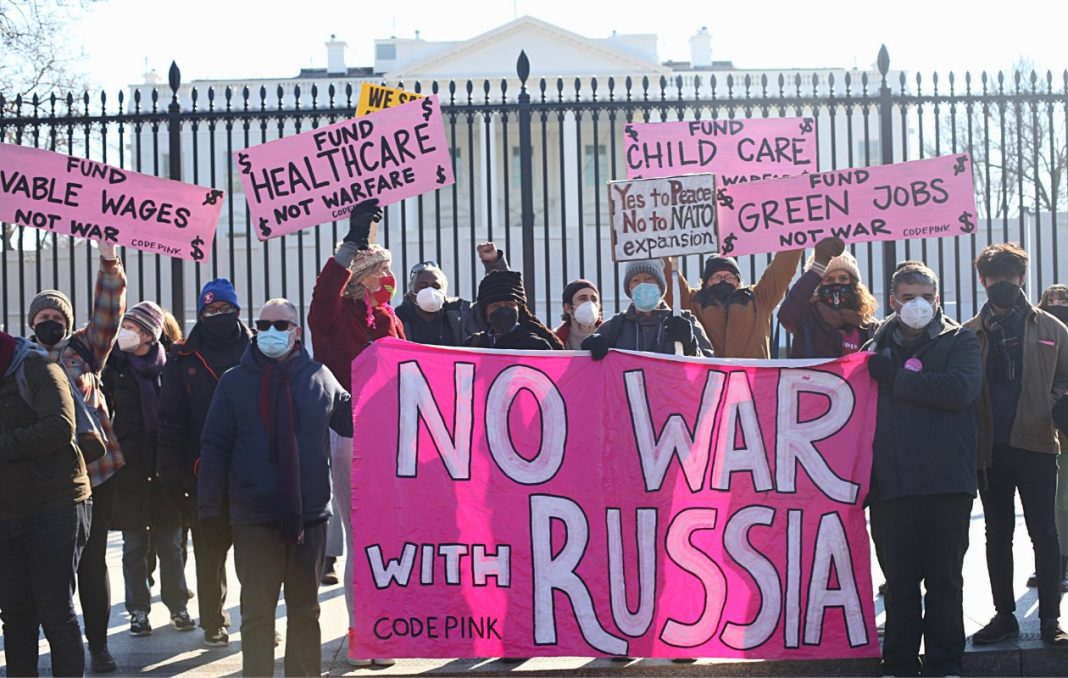 West News Wire: According to a Data for Progress poll of 1,214 likely US voters, 71% of Democrats and 46% of Republicans prefer the US to pursue a diplomatic settlement with Russia rather than go down the route of military warfare.

Overall, 58 percent of all respondents support Biden’s administration “reaching a deal with Russia to avoid conflict over Ukraine.”

They suggested that in order to de-escalate tensions and avoid war, the US should be willing to make compromises.

Anti-war protesters gathered outside the White House on Thursday, urging the US to tone down its harsh war rhetoric with Russia and instead focus on peace and diplomacy. The demonstrators demanded that the Biden administration cease provoking Moscow.

The protesters called on the Biden administration to stop antagonizing Moscow, which they warned could trigger a devastating war with global ramifications.

The White House, however, has declared its intent to impose sweeping sanctions on Russia and has authorized shipments of US-made weapons to Ukraine.

The Data for Progress poll is the latest in a string of surveys showing Americans are skeptical of the constant stream of news that depicts Ukraine as a vital national interest. The results echo similar findings by Morning Consult and YouGov.

The survey comes as senior administration officials have warned that Russia is positioned to invade neighboring Ukraine. President Joe Biden announced on Friday that he planned to move troops to Eastern Europe “in the near term.” The Pentagon has already placed around 8,500 troops on heightened alert.

Chairman of the Joint Chiefs of Staff, Gen. Mark Milley, told reporters at the Pentagon on Friday that the deployment is meant to “increase our readiness in the event we have to reinforce or assist our NATO allies.”

However, he said that war at this point “was not inevitable.”

The Kremlin then sounded a pessimistic tone, saying that there was “little reason for optimism” in resolving the problem.

On Friday, Russian Foreign Minister Sergey Lavrov said it was up to the US to decide whether to de-escalate the confrontation. “There will be no war if it depends on Russia,” he asserted. “We don’t want any more conflicts. We will not, however, allow our interests to be trampled on or ignored.”

The United States, its NATO allies, and Ukraine have accused Russia of plotting an invasion of Ukraine by massing soldiers near the country’s border. Russia denies this, claiming that in response to NATO’s eastward expansion, it is free to move soldiers around within its own boundaries.