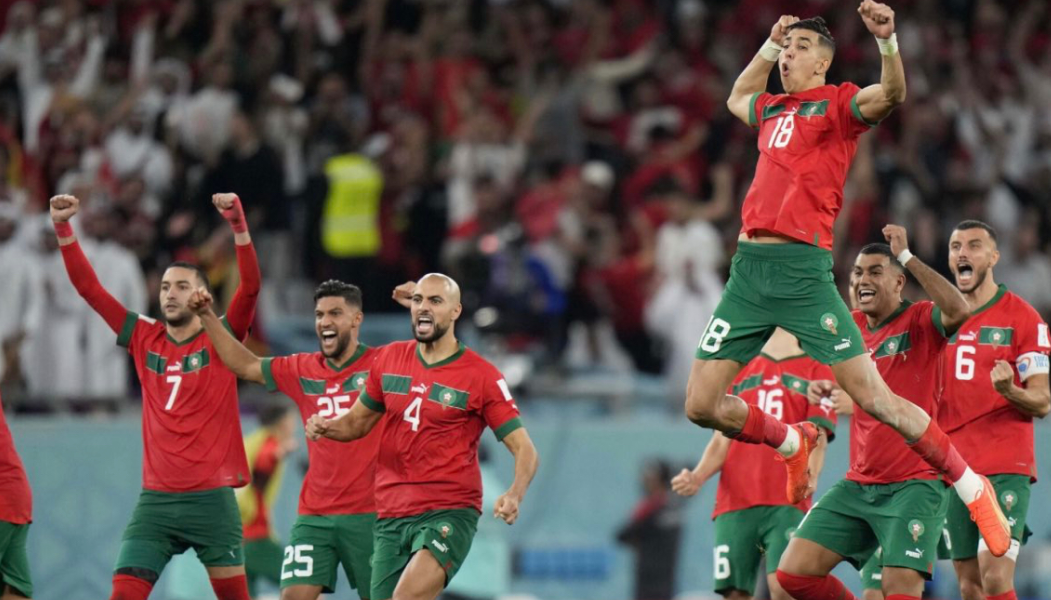 West News Wire: Morocco’s incredible World Cup run has reached new heights after the Atlas Lions defeated Portugal 1-0 to go to the tournament’s semifinal round as the first Arab and African nation ever.

Coach Walid Regragui’s team’s resolute defensive performance on Saturday capped a remarkable performance in Qatar, where they have now played more than seven hours of football without conceding to an opposition player. Youssef En Nesyri’s soaring header in the 42nd minute was the game-winner for the side.

Tens of thousands of Moroccan fans were crammed into the Al Thumama Stadium, and not even Walid Cheddira’s dismissal in the third minute of extra time could dim the glow of their unlikely victory.

Highly fancied Portugal, who had dominated the ball throughout, proved unable to unlock their rivals’ backline despite all their possession and the summoning of record-scorer Cristiano Ronaldo from the substitutes bench shortly after half-time.

The five-time world player of the year is set to finish his career without capturing the World Cup or ever getting to the final, but his appearance off the bench did see him become the joint all-time leading appearance-maker in men’s international football with 196 caps.

Morocco, whose improbable run has generated an outpouring of pride in the Arab world during the first World Cup to be staged in the Middle East, will now face either England or France in the semi-finals on December 14.

Argentina and Croatia go head-to-head in the last four the day before.

Morocco had already taken the scalps of Belgium and Spain in this tournament, but the win over Portugal is of much greater significance.

It marked one of the side’s better performances in Qatar, full of determined defending and canny counters, keeping at bay a collection of world stars despite losing key defender Nayef Aguerd to injury before the match and his back-four partner and captain Romain Saiss early in the second half.

Portugal will see it as a missed opportunity against the lowest-ranked side left in the tournament and a disappointing curtain call for the 37-year-old Ronaldo.

Morocco, again noisily encouraged by the majority of the 44,198-strong crowd, said they were fatigued after their last-16 success over Spain and immediately went into defensive mode as Portugal attacked from the outset.

A fourth-minute free kick for Portugal from wide on the right was swung into the penalty area, and met by Joao Felix’s diving header, producing a fine save from Yassine Bounou.

But the supply quickly dried up thereafter as Morocco closed the passing lanes and frustrated the Portuguese attackers.

Joao Felix had two more half-chances in the first half but Morocco gained in confidence and found a sudden spring in their step, frequently breaking on the counterattack.

Left-back Yahya Attiat-Allah made several surging runs down the flank, presenting Selim Amallah with a good chance in the 35th minute, which he was unable to convert.

But seven minutes later, a high ball from the fullback into the Portuguese box was met by a towering header from En Nesyri, outjumping both goalkeeper Diogo Costa and defender Ruben Dias to hand Morocco the lead.

Portuguese frustration was evident as they swarmed the Argentine referee Facundo Tello at the end of the first half, complaining that several penalty appeals had been turned down.

Morocco came close to a second goal four minutes into the second half as Jawad El Yamiq got a touch to Hakim Ziyech’s in-swinging free kick but Costa was in place this time to block.

Ronaldo’s entry in the 51st minute met a loud chorus of jeers, but he did inject new energy into the Portugal side for whom Goncalo Ramos, the hat-trick hero of their 6-1 win over Switzerland in the previous round, missed with a close-in header in the 58th minute.

Bruno Fernandes hit over the top of the crossbar five minutes later as Portugal threw more into attack and Morocco began to sit deeper. Bounou saved again from Joao Felix with seven minutes left as their rivals turned up the pressure.

But Atlas Lions’ rearguard ultimately proved sufficient, as they held out for a famous victory to the delight of their raucous support.