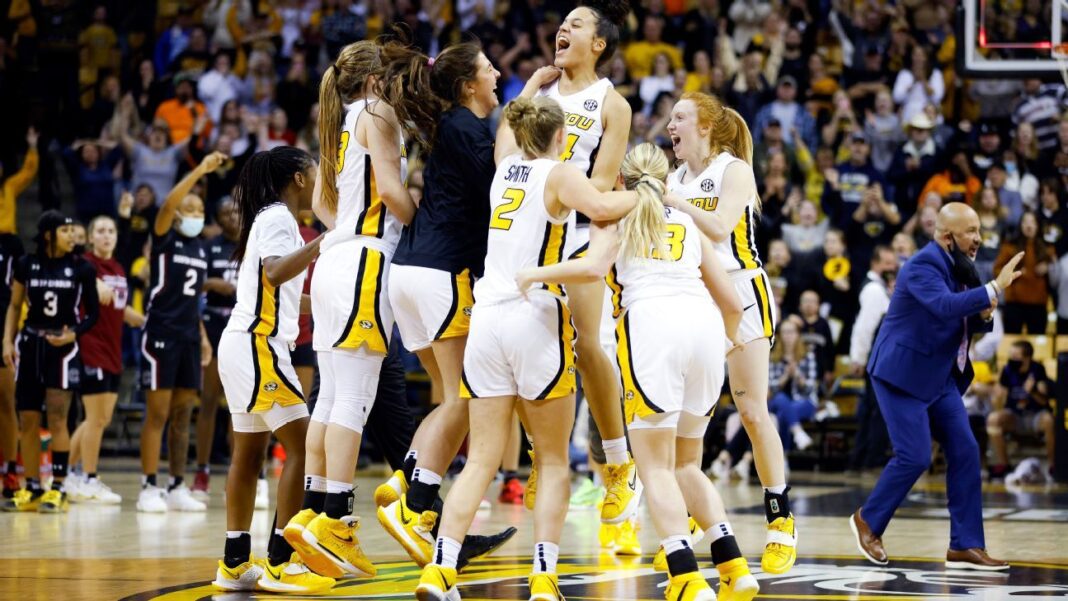 West News Wire: The top-ranked South Carolina women’s basketball team dropped its first game of the season, falling to Missouri 70-69 in overtime in the SEC opener for both teams on Thursday.

It was the Tigers’ first win over a club ranked No. 1 in the Associated Press poll, they had gone 0-8 in such games previously.

The loss broke South Carolina’s 43-game winning streak against unranked opponents, the longest active stretch in Division I. It’s the seventh time an unranked club has beaten a No. 1 in D-I women’s basketball since the 1999-2000 season.

“We have to play at a faster pace,” said South Carolina coach Dawn Staley. “We need to do a better job of getting the ball to our post players when they’re open.”

“Our defense has to be better, because it’s been better, but Missouri spread us out and they make you guard the 3-point line and all the motion in between that.”

The Tigers won despite a limited roster because of COVID-19 protocol. The absent Tigers players included Missouri’s leading scorer and rebounder, Aijha Blackwell, who averages a double-double (16.6 PPG, 12.7 RPG).

Hansen hit the game-winning layup with 0.1 of a second left in overtime, using a screen by Frank to get free from South Carolina defender Brea Beal. Hansen, a junior guard, came into the game averaging 10.5 PPG.

“Honestly, I’m still in shock,” said Hansen, a native of Long Island, New York, who played her freshman season at Auburn before transferring to Mizzou.

Frank, a Missouri native who won four state championships and 115 consecutive games at Strafford High School, said, “We had belief in the eight we had available, and we didn’t stop believing for 45 minutes. This is the kind of game that I came to Mizzou for.”

Both teams called timeouts before the final tick of the clock, and the ball was lobbed inside to South Carolina’s Aliyah Boston. Her layup went in, but it was after the buzzer.

The Tigers and their crowd of 6,139 which included former Tiger and current WNBA player Sophie Cunningham, back in her hometown for the holidays celebrated. Cunningham, Missouri’s all-time leading scorer, made the winning shot with 0.6 seconds left when the Tigers beat South Carolina 62-60 in February 2017.

“I have so much respect for Dawn and that program,” said coach Robin Pingeton, who got her 200th victory at Missouri on Dec. 22 vs. Illinois. “She has done so much for women’s basketball, and I am so thankful for that. She’s put together a phenomenal team with how unselfish they are.”

But the Gamecocks (12-1) struggled offensively all game, making just 38.2% of their shots. Boston, a national player of the year candidate, led the Gamecocks with 17 points.

In nonconference play, South Carolina defeated six ranked opponents, five of which were ranked in the top 10 when the Gamecocks faced them: UConn, Stanford, NC State, Maryland, and Oregon. They also defeated Duke, which was ranked No. 15 at the time.

The Gamecocks hadn’t lost since losing in the national semifinals to eventual champion Stanford 66-65 in San Antonio last season.

“I’m really happy for our players to have this opportunity,” Pingeton remarked. “You don’t get an opportunity to play against a No. 1 squad every day.”