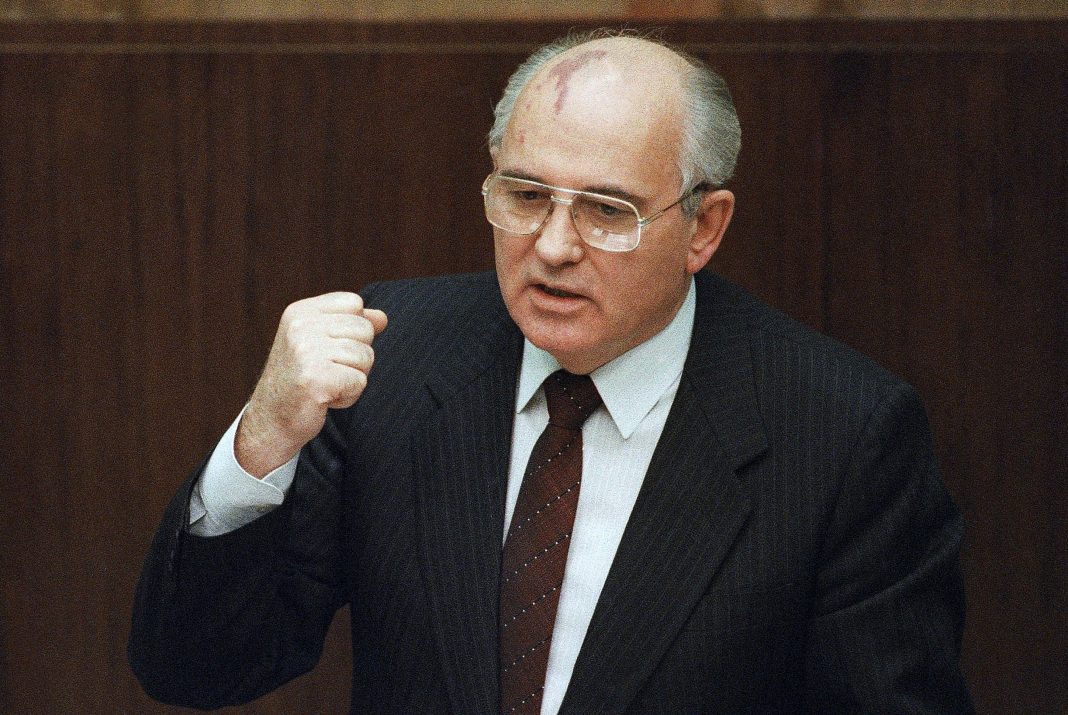 West News Wire: Former Soviet leader Mikhail Gorbachev passed away on Tuesday “after a serious and protracted illness,” according to the Central Clinical Hospital.

He had reached age 91. There was no instant information on a more precise cause of death.

According to Russia’s state-run news outlet Tass, Gorbachev will be laid to rest alongside his wife Raisa in Moscow’s Novo-Dyevitchiye cemetery.

His ascension in the 1980s, when he was young and full of energy, represented a new beginning for one of the two superpowers of the time. A political insider with a view to the outside, Gorbachev set into motion radical reforms that led to a series of unintended events.

Gorbachev was born in 1931, in the village of Privolnoye in southern Russia, to a peasant family living in a house with dirt floors. His family was directly affected by Josef Stalin’s “Terror,” with two of Gorbachev’s grandfathers arrested and exiled. During World War II, their village was overrun by Nazi troops.

Gorbachev worked the land as a teenager, and was awarded with his father the Order of the Red Banner of Labor, one of the USSR’s highest honors, for gathering a record harvest.

After university in Moscow, Gorbachev quickly became a young regional party boss. His energy attracted the attention of Yury Andropov, the powerful head of the KGB, who brought him back to Moscow as a protégé.

By then, the Soviet superpower was in trouble: the centrally planned economy was rotting and its lag behind Western countries was increasingly obvious.

The Soviet Union’s gerontic leadership symbolized its decrepit condition. Appointed to the Politburo at 47, Gorbachev was almost two decades younger than his colleagues.

In 1985, Konstantin Chernenko died the third elderly leader to die in office in as many years and Gorbachev became general secretary, brushing aside a succession challenge.

“We cannot keep living like this,” Gorbachev is said to have told his wife the night before his appointment.

He tore through the Iron Curtain between the USSR and the West by opening relations with the U.S., agreeing to a series of crucial summits soon after taking power.

“We have become closer, and we have come to know each other better,” Gorbachev said in 1989, his and U.S. President Ronald Reagan New Years’ address decorated with hopes of international cooperation and understanding. “Americans seem to be rediscovering the Soviet Union, and we are rediscovering America.”

Gorbachev signed treaties to reduce the size of his country’s nuclear arsenal and, in a well-received reversal in military policy, he withdrew troops from a nine-year war in Afghanistan.

In a meeting with Regan in 1988, Gorbachev signed the Intermediate-Range Nuclear Forces Treaty eliminating both countries’ stock of intermediate and short-range land-based missiles that could carry nuclear warheads. It was the first treaty that abolished an entire class of weapons systems and established unprecedented protocols for observers from both nations to verify the destruction of its missiles.

Underscoring the invention of nuclear weapons as a “material symbol and expression of absolute military power,” Gorbachev also underscored that mankind’s survival and self-preservation came to the floor.

Domestically, Gorbachev had two trademarks: more transparency and freedom a policy known as glasnost and bold economic reform, or perestroika.

It was not, ultimately, a winning combination.

Glasnost brought a feeling of liberation and empowerment to the Soviet people and when his economic policies didn’t work, they weren’t afraid to express their disillusionment.

Gorbachev’s vision was to legitimize communism by putting a democratic face on it. What he didn’t seem to realize was that his people would start demanding the real thing.