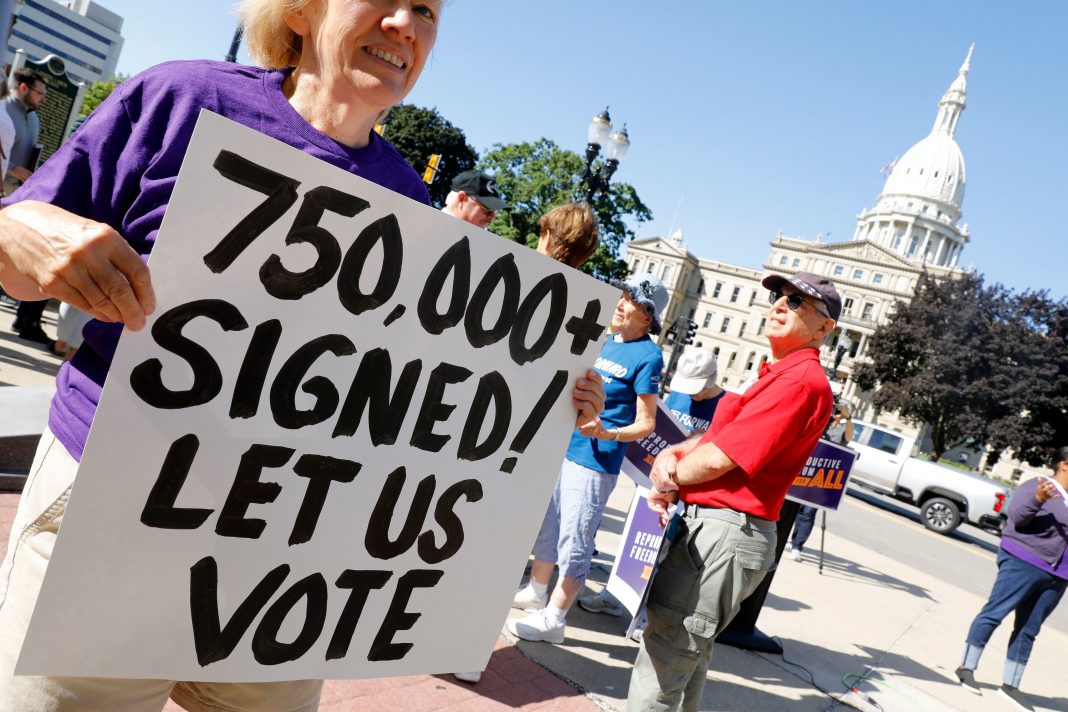 West News Wire: In the most recent abortion related conflict in the US, an electoral board in the state of Michigan has granted a request to bring a measure safeguarding abortion rights before voters in the November midterm elections.

To allow voters to decide on the plan, which would change the state’s constitution to entrench reproductive rights, a record amount of signatures were gathered in support of it. The state Supreme Court’s verdict from the day before was followed by the election board’s conclusion on Friday.

Following the ruling by the supreme court, Darci McConnell, a representative for Reproductive Freedom for All, said in a statement, “We are inspired and driven now more than ever to restore the safeguards that were lost under Roe.

Since the US Supreme Court in June overturned its landmark 1973 Roe v Wade decision, which guaranteed the right to abortion, abortion rights have been thrown into flux across the country.

The Michigan election board’s decision marks the end of a long and contentious fight between abortion rights advocates who pushed to put the issue before voters and Republicans who sought to block that effort.

Two Republican members of the four-person board had shot down the proposal last week, waving aside the more than 750,000 signatures collected in favour of the initiative. They said some spacing on the petition that made it unclear was the reason they turned it down.

The issue then went before the state’s Democratic-leaning Supreme Court, which dismissed those complaints in a ruling on September 8.

Chief Justice Bridget McCormack derisively called the highly technical complaints a “game of gotcha gone very bad” and said the words on the petition were legible and in the correct order.

Republican members of the panel have denied suggestions that their efforts to block the initiative were politically motivated. “We’ve gotten that clarity,” said Republican board member Tony Daunt, who did not speak to McCormack’s criticism.

“There was never any doubt in my mind … what we were going to do” once the court issued its decision, he added.

Abortion rights advocates cheered and applauded when the board voted 4-0 on Friday to add the proposal to the ballot. The amendment would affirm the right of residents to make pregnancy-related decisions, including on abortion and birth control, without interference.

A 1931 abortion ban on the books in Michigan was struck down in court earlier this week. But abortion rights advocates argued that the decision could be reversed in the future, saying an amendment to the state constitution is the surest path forward.

“The best way to protect the right to choose in Michigan is to put it in the state constitution,” said Mark Brewer, a lawyer who represents several reproductive rights groups in Michigan.

“We collected when it was so cold that our fingers barely worked and when it was so hot that we could barely stand,” said Elizabeth Buckner, one of two volunteers who collected signatures and addressed the board before the vote. “We did our job. Now, I’m asking you to do your job.”

Democrats in the state also hoped that the initiative would bolster their chances in the upcoming elections, giving them an opportunity to put unpopular Republican abortion bans front and centre in the final stretch of their campaigns.

For instance, the state’s Democratic governor Gretchen Whitmer has made abortion rights a key part of her reelection campaign.

Voters in Kansas, a state that leans Republican, rejected a proposed ban on abortion by landslide. Democrats thought that a backlash against Republicans at the polls would result from what they regarded as their perceived overreach on abortion rights.

According to a poll conducted earlier this week by The Detroit News and WDIV-TV, women’s rights and abortion were the top issues influencing Michigan voters in the months leading up to the November elections. Additionally, it showed that the amendment to safeguard abortion rights was backed by the majority of likely voters.