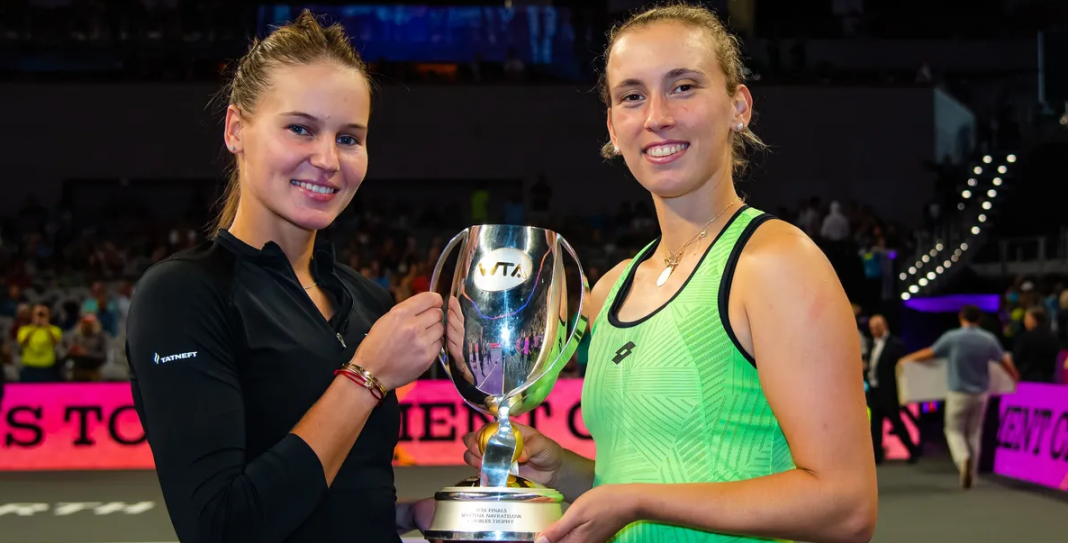 West News Wire: Veronika Kudermetova of Russia and Elise Mertens of Belgium won the WTA Finals in Texas early on Tuesday morning after mounting an incredible comeback in the final set tiebreak against defending champions Barbora Krejcikova and Katerina Siniakova. They came back from a five-game deficit.

After a marathon 1 hour 42 minute match, Kudermetova and Mertens rallied from a 7-2 deficit to win what is now their second doubles trophy of the year with a final score of 6-2, 4-6, [11-9].

Both teams had been performing well throughout the competition, but Kudermetova and Mertens got the match off to a stronger start by working together to stop their opponents’ service game and quickly take a 4-0 lead in the first set.

It initially seemed as though the result might be a formality after Kudermetova and Mertens continued their momentum early in the second as they again broke serve to lead 4-3 but a rare Kudermetova error allowed Krejcikova and Siniakova a glimmer of hope, and this was the only invitation they needed as they won the remaining games in the second set without dropping a point.

The Czech pair seized the ascendency early in the match-tiebreak as they found themselves up by 7-2, but a fightback from Kudermetova and Mertens saw them score five successive points to level the scores at 7 points apiece.

Krejcikova and Siniakova wouldn’t go down easily, however, as they saved a championship point at 9-8 but it was Mertens who scored the telling shot when a strong return forced an error from Krejcikova, and handed the duo victory against last year’s champions and avenged their defeat in this year’s Australian Open semi-finals.

It was just the fourth match lost by Krejcikova and Siniakova in 2022 in a spectacular season in which they won three Grand Slams at the Australian Open, Wimbledon and the US Open.

“It’s tough to say right now, because a lot of emotions,” the 25-year-old Kudermetova said afterwards. “But I think we’re so happy and so proud of our team.”

“I was close last year,” Mertens added. “I think we played really consistent this tournament. And yeah, I can’t even believe we won. That super-tiebreak was 7-2? I can’t even remember points.

“In that tiebreak when it was 2-7, I said to Elise that we need to believe, we need to stay positive, and it doesn’t matter what happens, we keep working,” Kudermetova continued.

After teaming up just last year, Kudermetova and Mertens have now combined for three titles and judging by their efforts in defeating the all-star Czech team in Texas, there might be significantly more silverware in their future.