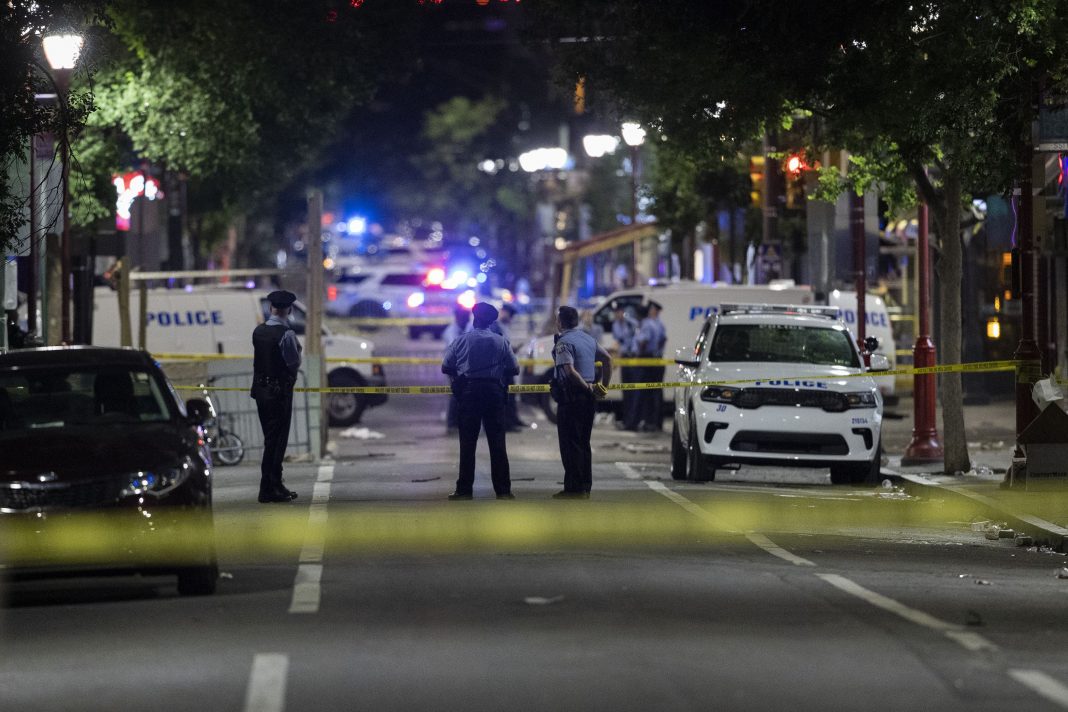 West News Wire: Officials said “several active shooters” opened fire at a crowded intersection in Philadelphia’s South Street entertainment district late Saturday night, killing three people and injuring at least 11 others. It was one of a string of mass shootings that erupted across the country over the weekend.

According to the Gun Violence Archive, at least five shootings involving four or more victims occurred across the country in a violent 27-hour period, including one that left three people dead and 11 injured in Chattanooga, Tennessee, another in which three people were killed at a graduation party in Socorro, Texas, and yet another in which a 14-year-old girl was killed and eight people were injured at a strip mall in Phoenix, Arizona, according to the Gun Violence Archive, a website that tracks shootings across the nation.

In total, nine people were killed and 37 injured in the five shootings.

The Philadelphia shooting erupted just before midnight at the busy intersection of Third and South streets.

Inspector D.F. Pace of the Philadelphia Police Department said hundreds of people were milling about the area when the shooting caused a panic and sent people running in all directions, some diving behind cars for cover.

“There were hundreds of individuals just enjoying South Street, as they do every single weekend, when the shooting broke out,” Pace told reporters.

Philadelphia Police Commissioner Danielle Outlaw said at a press conference Sunday afternoon that a police officer responding to gunshots in the area witnessed a man firing a gun into a crowd and attempted to detain him. Outlaw said the officer fired at the armed man three times before losing the assailant in the crowd.

Outlaw said investigators believe the officer shot the gunman, who is still being sought.

No arrests have been announced. Investigators are combing through security video in hopes of identifying the suspects and determining a motive for the shooting.

Outlaw said the shooting possibly started during a physical confrontation between two people, including one of the people killed in the incident.

“These individuals eventually began firing at one another with both being struck, one fatally,” Outlaw said.

The names of the three people killed in the episode a 34 year old man, a 27 year old woman and a 22 year old man were not immediately released. Outlaw said two of the slain victims were innocent bystanders as well as many of those who were wounded.

One of those killed was identified as Kris Minners, a resident adviser at Girard College in Philadelphia, the Girard College Federation of Teachers union said in a statement. Two more victims were identified by the Philadelphia Police Department Sunday afternoon as 34 year old Gregory Jackson and 27 year old Alexis Quinn.

“The loss of Kris reminds us that gun violence can and will touch everyone in our nation as long as our elected officials allow it to continue,” the teachers’ union statement read.

Seven of the wounded victims were taken to Thomas Jefferson University Hospital, overwhelming the emergency room staff and prompting 911 dispatchers to direct first responders to take additional victims to two other area hospitals.

Outlaw said the injured victims are 17 to 69 years old and their conditions ranged from stable to critical.

The mass shooting came on the heels of a deadly Memorial Day weekend in Philadelphia, in which more than 40 people were shot in separate incidents across the city, including a 9 year old boy and his father returning to their home from a holiday cookout, police said.

As of midnight Saturday, Philadelphia had recorded 211 homicides this year, 14 fewer than this time in 2021, a year that saw a record 562 homicides, according to Philadelphia Police Department crime statistics.

Chattanooga, Tennessee, police are investigating the city’s second mass shooting for the second weekend in a row after a barrage of shots from multiple gunmen early Sunday left three people dead and 11 injured, officials said.

The shooting occurred around 3 a.m. outside a bar downtown Chattanooga.

Chattanooga police Chief Celeste Murphy said multiple gunmen are suspected in the shooting. She said of the three people killed, two were shot to death and one was struck by a car fleeing the scene.