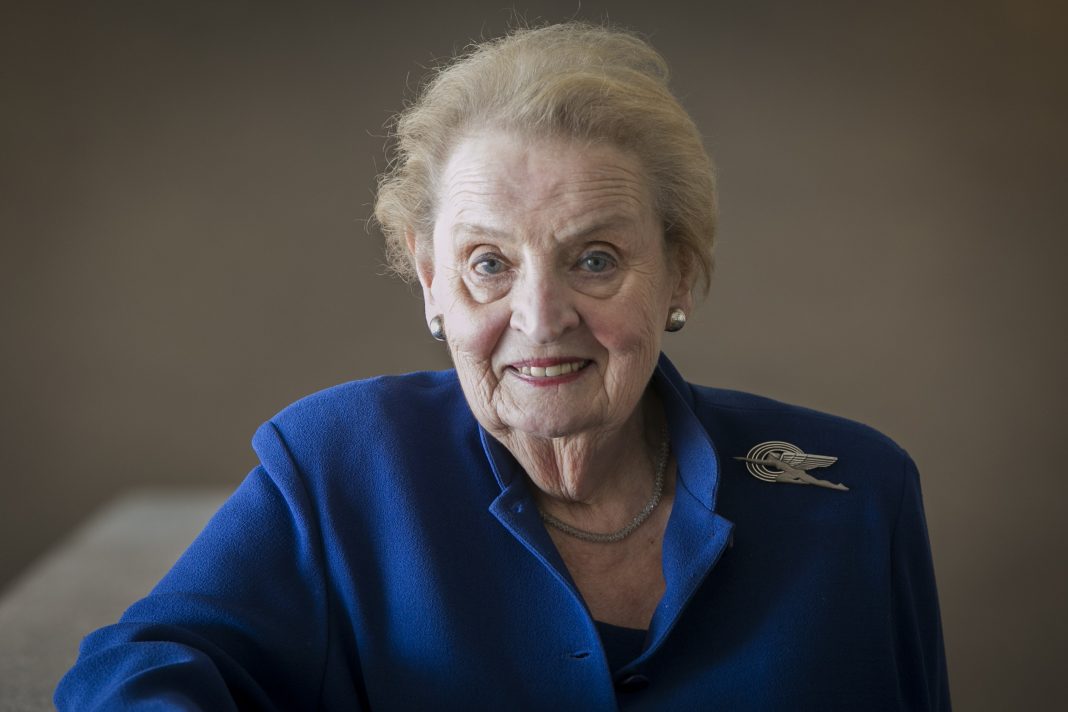 West News Wire: According to her family, Madeleine Albright, the first woman to serve as Secretary of State of the United States, died of cancer on Wednesday at the age of 84.

President Bill Clinton nominated Albright for Secretary of State, and she served in that position from 1997 to 2001. From 1993 until 1997, she served as the United States’ ambassador to the United Nations.

“We were partners and friends working to welcome newly liberated nations into NATO and confront the horrors of genocide in the Balkans as the world reinvented itself in the aftermath of the Cold War,” President Joe Biden said in a statement. “I will always remember Madeleine’s unwavering belief that ‘America is the indispensable nation.'”

President Clinton and former Secretary of State Hillary Clinton in a statement called Albright “one of the finest Secretaries of State, an outstanding UN Ambassador, a brilliant professor, and an extraordinary human being.”

“As a child in war-torn Europe, Madeleine and her family were twice forced to flee their home,” the Clintons said. “When the end of the Cold War ushered in a new era of global interdependence, she became America’s voice at the UN, then took the helm at the State Department, where she was a passionate force for freedom, democracy, and human rights.”

The Clintons commended Albright’s commitment to “ending ethnic cleansing in Bosnia and Kosovo; supporting the expansion of NATO into Central Europe; fighting the proliferation of nuclear weapons; broadening U.S. efforts to strengthen civil society, reduce poverty, and relieve debt in development countries; elevating concerns about climate change and environmental degradation on the world stage; and much more.”

The Clintons said, in their last conversation with Albright two weeks ago, the 84-year-old remained determined “to go out with her boots on, supporting Ukraine in its fight to preserve freedom and democracy.”

In a State Department briefing Wednesday, spokesperson Ned Price said Biden and Secretary of State Antony Blinken had been notified of her death.

“Madeleine Albright was a brilliant diplomat, a visionary leader, a courageous trailblazer, a dedicated mentor, and a great and good person who loved the United States deeply and devoted her life to serving it,” Blinken said in a statement. “She was also a wonderful friend to many, including me. I’ll miss her very much.”

Price said Albright was a mentor to Blinken, his deputy Wendy Sherman and many others.

“The impact that Secretary Albright had on this building is felt every single day in just about every single corridor,” Price said.

“She was as trailblazer as the first female secretary of state, and quite literally opened doors for a large element of our work force,” Price added.

“She took so many people under her wing that you have to imagine just how large that wingspan came to be,” Price said. “So it’s a really devastating piece of news. I know there are many people in this building who are grieving and will be grieving today. And our thoughts of course are with her family and the many, many people she touched in this building, in this country and around the world.”

Former President Barack Obama said in a statement, “Madeleine Albright helped bring peace to the Balkans, paved the way for progress in some of the most unstable corners of the world, and was a champion for democratic values. And as an immigrant herself, she brought a unique and important perspective to her trailblazing career.”

Obama also recounted an interaction he said Albright had with an Ethiopian man at a naturalization ceremony.