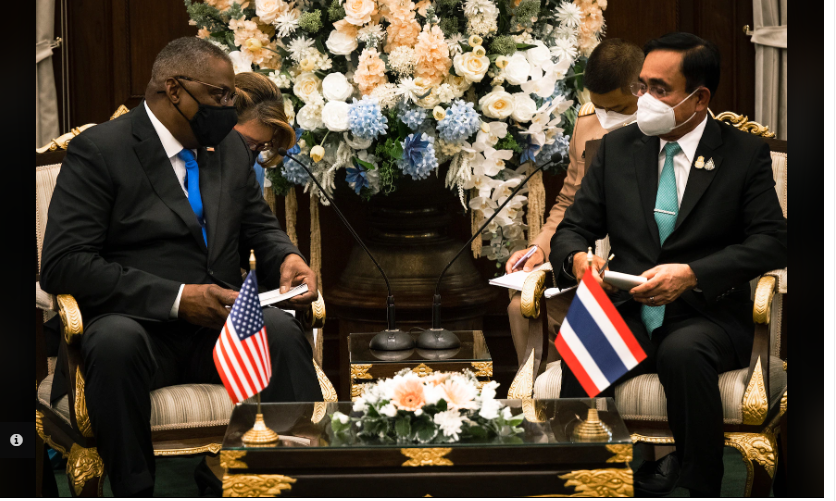 West News Wire: On Monday, US Secretary of Defense Lloyd Austin met with Thailand’s prime minister in an effort to strengthen Washington’s “unparalleled network of alliances and partnerships” in the region, according to Austin.

Last month in Washington, Prime Minister Prayuth Chan-ocha, who is also the Defense Minister, met with Austin. Despite a cooling of relations following the 2014 military coup that brought former army commander Prayuth to power, Thailand and the United States have long been military allies. Austin’s trip to Thailand on Monday was his first as defense secretary.

Austin and Prayuth “shared perspectives on regional security issues, and discussed opportunities to strengthen the US-Thai alliance,” according to a statement released by the US Defense Department after the meeting.

It said Austin declared Washington’s interest in strengthening “interoperability between the U.S. and Thai forces and to support Thailand’s modernization requirements.”

The two men also discussed prioritizing cooperation in emerging technical areas, such as the cyber and space technology sectors, as well as Thailand’s desire for “enhanced defense industry cooperation,” the statement said.

Thai media had reported that Prayuth would likely discuss arms procurement with Austin, including of F-35 fighter aircraft, but Austin did not comment specifically on that in remarks to the media.

Tensions between the U.S. and China have been growing in part over Beijing’s claims to Taiwan and much of the South China Sea, and its increasing power and influence in the region.

In a speech Saturday at the annual Shangri-La Dialogue defense summit in Singapore, Austin said China’s “steady increase in provocative and destabilizing military activity near Taiwan” threatens to undermine the region’s security and prosperity.

He said he was proud that Washington’s “unparalleled network of alliances and partnerships has only deepened” in the past year.

China’s defense minister, Gen. Wei Fenghe, said at the same conference that the U.S. is trying to turn Southeast Asian countries against Beijing and is seeking to advance its own interests “under the guise of multilateralism.”

China over the past decade has been trying to extend its influence in Southeast Asia, both through aid and investment, including its “Belt and Road” infrastructure projects and use of its navy and other maritime resources to press its claims to vast areas of the South China Sea.

In a briefing in Bangkok, Austin said a conversation he had in Singapore with his Chinese counterpart was “an important step in our efforts to develop open lines of communication” with Beijing’s defense leaders.

“America never shies away from honest competition, but we don’t seek conflict, nor do we seek a region that’s split into hostile blocks,” he said, according to a defense department transcript of his remarks. “It was an important opportunity to raise our concerns about the potential for instability in the Taiwan Strait and to underscore our long-standing policy toward Taiwan as unwavering and unchanged.”

Thailand and the United States were close allies during the Vietnam War, and in 2003, Washington designated Thailand a major non-NATO ally, one of about 20 worldwide.

Such status means the U.S. regards Thailand as a strategic partner, and facilitates some aspects of military assistance and cooperation. The annual multinational Cobra Gold military exercise, one of the world’s biggest, is hosted in Thailand in partnership with the United States.