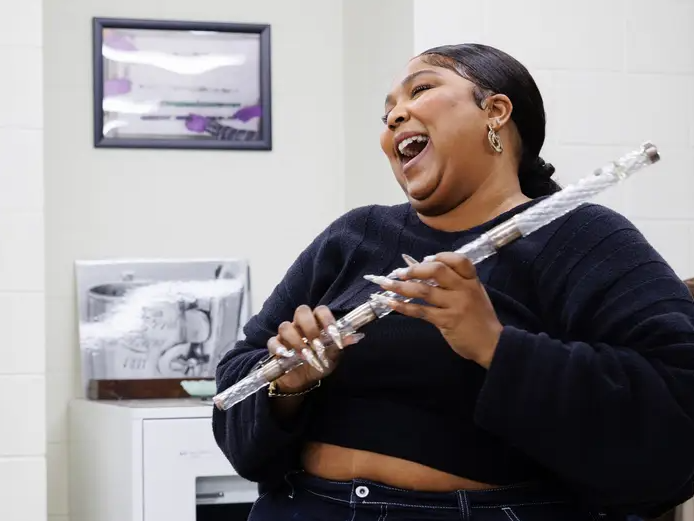 West News Wire: US singer Lizzo dazzled audience members on stage during a concert on Tuesday in Washingon, DC, by playing a 200-year-old crystal flute that was formerly owned by former President James Madison.

The Library of Congress gave the trained flautist and singer permission to use the instrument, which was brought onto stage by a police escort.

It’s like playing out of a wine glass, she observed as she examined it on stage.

Then she began to play a few notes and shook her lower body.

She handed it back to a representative who put it back in its case, beaming, “I just twerked and played James Madison’s flute from the 1800s!”

While posting the video on her own social media channels afterwards, the Houston-raised Juice singer told her fans: “No one has ever heard what is sounds like now you do.”

She later added: “As a flute player this is iconic and I will never be over it.”

A spokesperson for the Library of Congress told news reporters that the flute may have been played in public on a rare special occasion in the past, most likely in Madison’s time.

Until Lizzo picked up the flute, the Library’s curator, who has worked at the Library since 1993, had never heard it played live.

Following her historic gig on Tuesday evening, The Library of Congress tweeted to confirm the flute had been returned safely.

“We just did a DNA test,” they posted. “Turns out: It’s 100% that [crystal] flute” a play on words with the lyrics from Lizzo’s hit song Truth Hurts.

Grammy-winner Lizzo is currently touring the US in support of her fourth album, Special, which featured the TikTok hit, About Damn Time.

Earlier this summer, she changed the lyrics to a new song, Grrrls, after fans complained it used an ableist slur.

James Madison, America’s fourth President from 1809 to 1817, made a major contribution to the ratification of the Constitution by writing The Federalist Papers, along with Alexander Hamilton and John Jay. In later years, he was referred to as the Father of the Constitution.