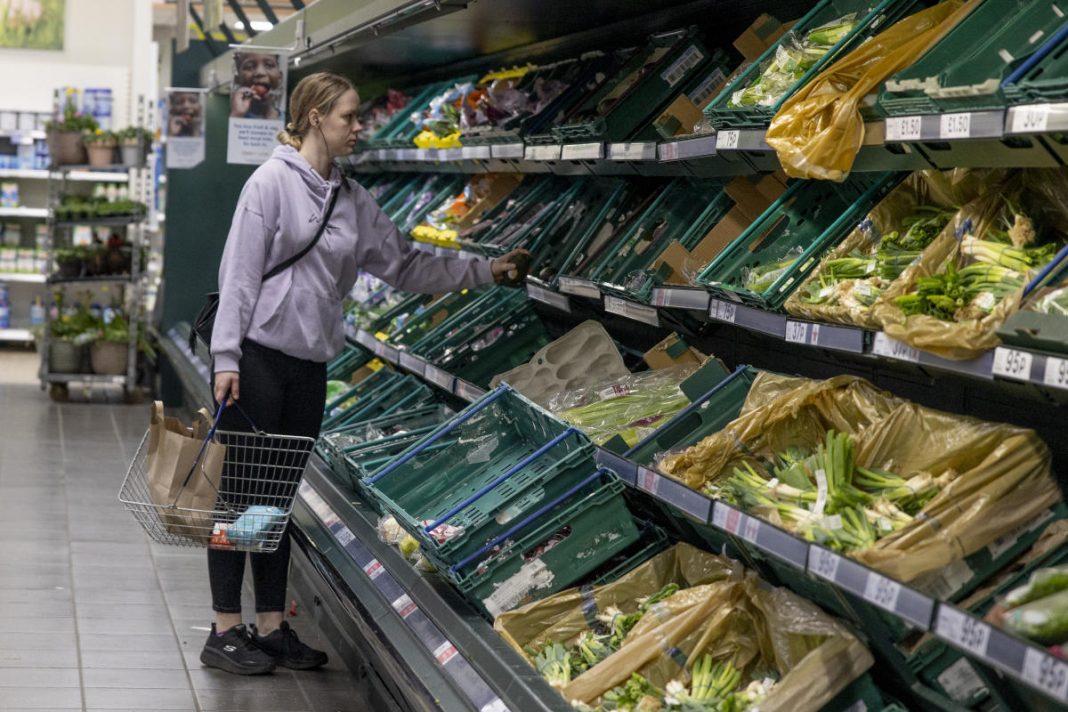 West News Wire: Last month, the price of food in the United Kingdom increased at its quickest rate since 1980, pushing inflation back to a 40-year high and putting pressure on the government, which is already under fire, to balance the books without drastically cutting aid to the nation’s poorest citizens.

According to the Office for National Statistics, the cost of basics including meat, bread, milk, and eggs drove a 14.6% increase in food costs in the year through September. This brought consumer price inflation back to 10.1%, the highest level since early 1982 and the same as it was in July of last year.

Following a disastrous package of tax cuts that shook financial markets, the statistics sparked urgent calls for the government to do more to assist families and retirees. After taking office last week, Treasury Secretary Jeremy Hunt abandoned the plan, but he has cautioned that this winter would be challenging and that spending cuts will still be required.

Schools around the nation are having trouble feeding underprivileged children, according to Glenn Sanderson, head teacher at St. Aidan’s Catholic Academy in Sunderland. Many of them transfer funds from textbooks and classroom instruction to finance food programs. In this situation, the idea of budget cuts for the government is “appalling,” he declared.

Parents must face difficult choices, such as whether to use the money to feed their children or to pay the bus price to bring them to school. said Sanderson to the BBC. “I find that utterly inappropriate in today’s culture.”

The administration will “prioritize relief for the most disadvantaged while achieving wider economic stability,” Hunt said this week in remarks to the House of Commons.

During the weekly prime minister’s questions session on Wednesday, Prime Minister Liz Truss reaffirmed her previous pledge to raise pensions in line with inflation. However, she gave the impression that benefits would be similar to wages.

Due to the disruption of natural gas, grain, and cooking oil imports, Russia’s invasion of Ukraine has increased food and energy costs globally. Price increases that started last year as the world economy began to recover from the COVID-19 pandemic were furthered by this.

Prices are growing everywhere, but the increase in food expenditures last month had the biggest impact on household budgets in Britain. The price of transportation increased by 10.9%, that of furniture and household products by 10.8%, and that of apparel by 8.4%. Increasing energy costs are to blame for the 9.3% increase in housing costs.

The cost of electricity and natural gas has been capped by the government in an effort to protect customers from the effects of growing energy prices. But Hunt has now set a six-item price ceiling.

According to Jack Leslie, senior economist at the Resolution Foundation, a think tank that focuses on raising the standard of living for low- and middle-income people, inflation is likely to be higher for longer than previously predicted.

Leslie said in a statement: “This gloomy picture means that household incomes will continue to decline substantially again next year, especially as support with energy expenses is discontinued.” In light of these discussions, the administration is debating whether to go back on prior promises to raise benefits or pensions in line with inflation.

The Bank of England struggles to get inflation back to its objective of 2%, therefore expectations are that it will increase interest rates further and faster as a result of greater inflation.

Without sending Britain into a recession, the central bank is attempting to reduce inflation. According to ONS data, the British economy contracted by an estimated 0.3% in August after expanding by just 0.1% in July.

Victoria Scholar, head of investment at Interactive Investor, stated that today’s higher-than-expected inflation estimate “paves the way for another aggressive interest rate increase from the Bank of England at its next meeting in early November.” The central bank, however, finds itself in a difficult position as it attempts to reduce pricing pressures without unintentionally raising the likelihood of a recession.

The U.S. Federal Reserve has indicated it would continue its quick rate hikes in order to tackle inflation, which is at a decades-high 8.3%. Other nations are making the same calculation.

The European Central Bank is anticipated to boost interest rates significantly again at its meeting the following week in order to combat record inflation in the 19 nations that use the euro. On Wednesday, the EU’s statistics office, Eurostat, revised September’s eurozone inflation down to 9.9%.