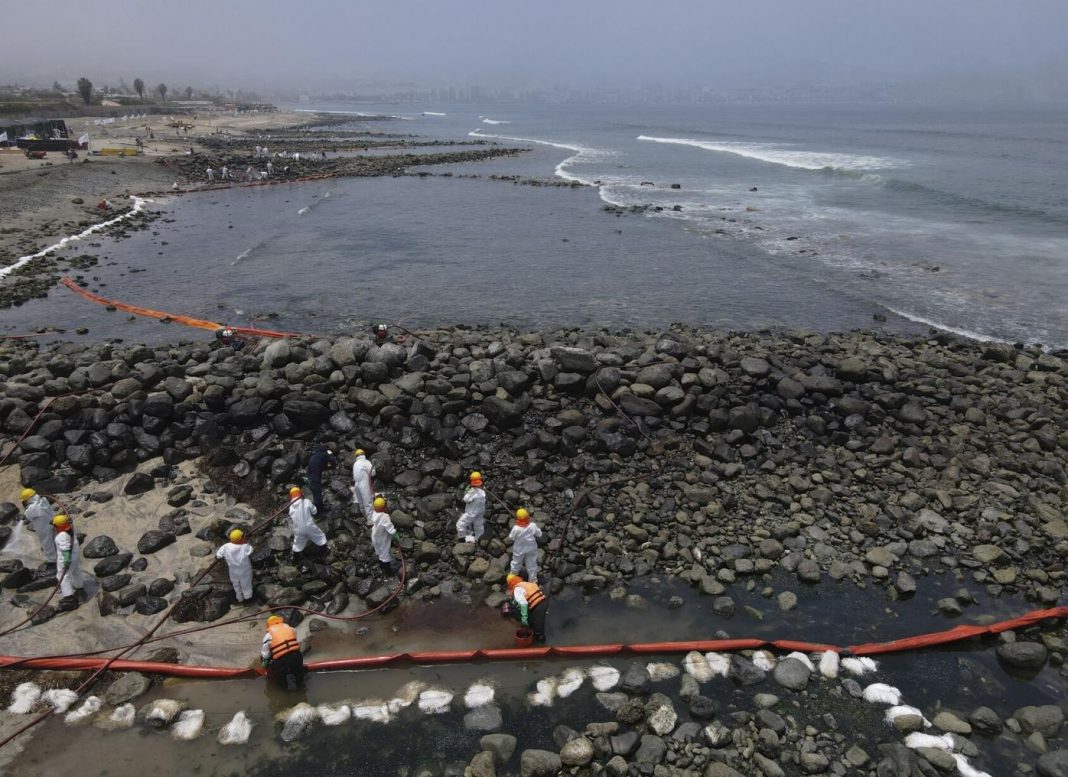 West News Wire: Hundreds of beaches near Lima were desolate Tuesday, and thousands of fisherman were still out of work a month after an oil spill at a refinery caused the largest environmental disaster in Peru’s recent history, according to the United Nations.

The cleanup is taking its time, with Peruvian authorities reporting that just about a quarter of the 11,900 barrels of oil discharged into the Pacific Ocean on January 15 had been retrieved. Only 10,300 barrels of oil were leaked that day at Repsol’s La Pampilla refinery in front of Peru’s capital, according to the firm.

On Monday, Environment Minister Modesto Montoya announced the recovery of 2,000 barrels. Requests for comment on the amount of barrels seized were not immediately returned by Repsol.

Chocolate-colored foam bobs on the waters in front of Lima, its appearance a product of the “physical-chemical” reaction between the spilled oil and moving seawater, said Montoya, citing experts from a U.N. multidisciplinary team that has analyzed the spill.

Thousands of fishermen sit idly by, unable to harvest the fish and shellfish they normally extract from the roughly 113 square kilometers (44 square miles) affected by the spill, according to authorities. It is an area larger than the city of Paris.

“We don’t get an answer from anyone, they just give us crumbs” of information, said fisherman Ricardo Estrada, 38, standing on the pier in Ancón, one of 24 polluted beaches on Peru’s coast.

Ancón’s beach, which has a boardwalk that is normally bursting with tourists this time of year, is now empty.

“It looks like an empty cathedral,” said Estrada, who has an 8-year-old son and cares for his elderly parents. He looks at a dead seabird that lies on the pier where fish are normally sold.

“The animals keep dying,” he said.

Peru’s government still does not have a full estimate of the economic damage caused by the spill. President Pedro Castillo has changed environment ministers three times amid the environmental disaster, with one minister lasting just three days.

At the end of January, a judge prohibited the local director of Repsol, Jaime Fernández-Cuesta, three company managers and a state official from leaving Peru for 18 months. They are being investigated for alleged environmental crimes.

The unemployed fishermen attended a Mass in Lima’s cathedral last weekend. They brought with them their empty nets and asked the government not to forget them.

The spill took place while crude oil was being unloaded at the refinery from the Italian ship Mare Doricum.

Repsol blames the ship for the spill, but Fratelli d’Amico Armatori SpA, the company that owns the ship, told The Associated Press on Tuesday that “it is important that we do not provide information that is incorrect or misleading.”

“We can confirm that our evaluation of the tests to date shows that all protocols and procedures on board were followed by the vessel at the time of spill and from the time oil was observed in the water,” the Italian company said. The ship has been seized by Peruvian authorities.

Repsol’s La Pampilla refinery is the most important one in Peru and supplies fuel to 40% of the country.