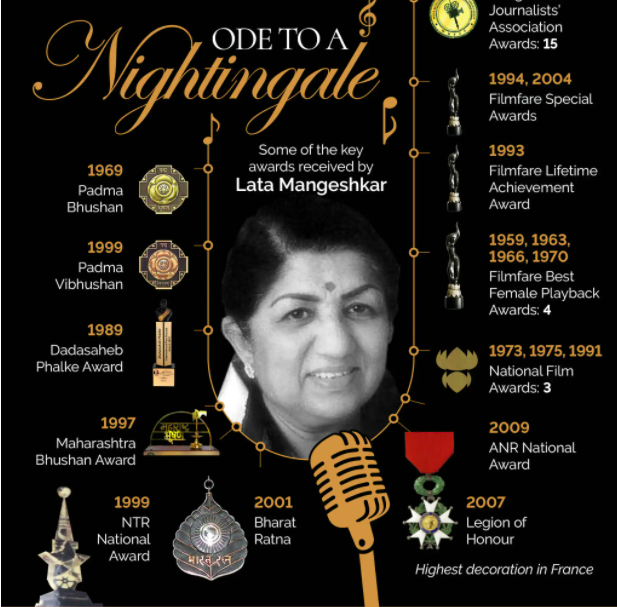 West News Wire: A cultural icon in India and a vocalist who defined music and melody for generations across South Asia, has died at the age of 92, according to her doctor.

Mangeshkar was admitted to the hospital on January 11 after contracting COVID-19, and she died of “multi-organ failure” on Sunday at Mumbai’s Breach Candy Hospital, according to Dr Pratit Samdani.

The “Nightingale” Mangeshkar dominated Bollywood music for more than half a century with her younger sister Asha Bhonsle, a celebrity in her own right, and is widely regarded as the Indian film industry’s greatest-ever playback vocalist.

Mangeshkar was born on September 28, 1929, in Maharashtra, and began singing with her father, Deenanath, who was also a professional singer, at religious events.

After she moved to Mumbai, India’s film capital, she became a star with immense popular appeal, enchanting audiences with her smooth, sharp voice and immortalising Hindi music for decades to come.

Mangeshkar sang more than 5,000 songs in more than 1,000 Bollywood and regional language films, in addition to recording devotional and classical albums. Her oeuvre spanned about 27,000 songs in dozens of languages including English, Russian, Dutch and Swahili.

“My voice is a gift from God,” she once told an interviewer.

“When I sang a lullaby, I became a mother, when it was a romantic song, I was a lover.”

Her songs, always filled with emotion, were often sad and mostly dealt with unrequited love, but others sang of national pride.

She sang for Bollywood’s earliest superstars like Madhubala and Meena Kumari and later went on to give voice to the industry’s modern divas like Priyanka Chopra.

Over the duration of her career, Mangeshkar worked with nearly all of India’s legendary music directors, including the duo Madan Mohan, Naushad, SD Burman, RD Burman, Laxmikant-Pyarelal and AR Rahman, selling tens of millions of records.

She also won dozens of singing awards, earning her near-saintly status in the Bollywood music industry.

Anirudha Bhattacharjee, an author from Kolkata, said the defining factor of why Mangeskkar appealed to millions of people was “her immaculate voice”.

“Another aspect is whatever she sang could be equated with the divine,” he added. “There has been nobody like her and I don’t think there will be anyone like her in the future.”

Mangeshkar was not shy about taking a stand when it came to raising her fees or asking for a share of the royalties earned on her songs.

Her longevity and discipline saw her lend her voice to teenage actresses who were 50 years her junior.

Critics complained that her dominance left little room for newer singers to thrive but her audience remained loyal, ensuring that her songs ruled the charts.

She was also known for her quirks, such as never singing with her shoes on and always writing out each song by hand before recording it.

Mangeshkar will be given a formal funeral, according to India’s Home Ministry, and the government will observe official mourning with the flag flying at half-staff till Monday.

Her death, according to Prime Minister Narendra Modi, has left a “gap in our nation that cannot be filled.”

In a tweet, he added, “The coming generations will remember her as a bastion of Indian culture, whose melodic voice had an unrivaled power to mesmerize people.”

Mangeshkar never married. Her four siblings, all outstanding singers and musicians, survive her.