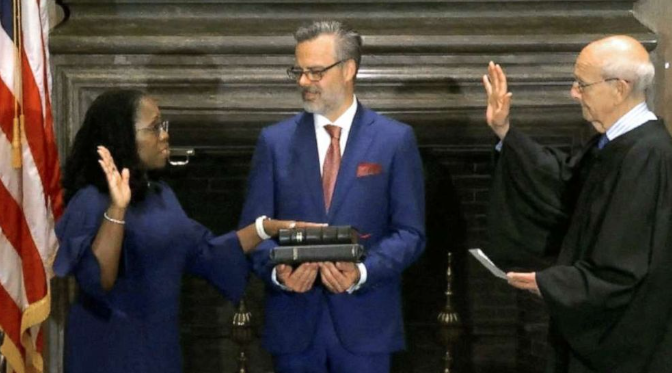 West News Wire: On Thursday, Ketanji Brown Jackson became the first Black woman in history to be sworn in as a justice on the nation’s highest court, marking a significant moment in American representation.

Jackson received both the judicial and constitutional oaths from Chief Justice John Roberts and retiring Justice Stephen Breyer during a brief ceremony at the Supreme Court. Jackson served as Breyer’s law clerk for about 20 years.

Dr. Patrick Jackson, her husband, finished repeating the oaths while holding two Bibles: a family Bible and the Harlan Bible, a King James Bible given to the Supreme Court in 1906.

“On behalf of all the members of the court, I’m pleased to welcome Justice Jackson to the court and to our common calling,” Roberts said as the other seven other sitting justices attending applauded while Jackson beamed.

Breyer shook her hand and whispered, “Congrats,” before patting her on the back.

“With a full heart, I accept the solemn responsibility of supporting and defending the Constitution of the United States and administering justice without fear or favor, so help me God,” Jackson said in a written statement. “I am truly grateful to be part of the promise of our great Nation.”

She thanked her new colleagues “for their warm and gracious welcome,” and said she is “especially grateful for the time and attention given to me by the Chief Justice and by Justice Breyer.”

“Justice Breyer has been a personal friend and mentor of mine for the past two decades, in addition to being part of today’s official act,” she wrote. “In the wake of his exemplary service, with the support of my family and friends, and ever mindful of the duty to promote the Rule of Law, I am well-positioned to serve the American people.”

Breyer, in his own statement, said he’s “glad today” for “Ketanji,” “for my fellow Justices,” and “for America.”

“Her hard work, integrity, and intelligence have earned her a place on this Court,” he said. “They gain a colleague who is empathetic, thoughtful, and collegial. Ketanji will interpret the law wisely and fairly, helping that law to work better for the American people, whom it serves.”

She has also spoken with emotion about descending from slaves and her parents growing up in Jim Crow South.

“In my family, it took just one generation to go from segregation to the Supreme Court of the United States,” Jackson said at the White House after she was confirmed. “And it is an honor, the honor of a lifetime, for me to have this chance to join the court, to promote the rule of law at the highest level, and to do my part to carry our shared project of democracy and equal justice under law forward into the future.”