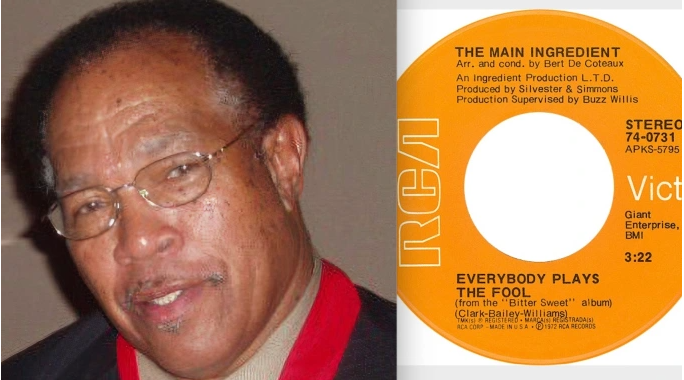 West News Wire: Kenneth “Ken” Williams, a songwriter who co-wrote or co-wrote hundreds of songs for a wide range of artists, including Donny Hathaway, The Four Tops, and Peaches & Herb, as well as the hit song “Everybody Plays the Fool” by The Main Ingredient, has passed away. He was 83.

According to his wife, Broadway actress and singer Mary Seymour Williams, Williams passed away on June 17 at North Shore University Hospital in Manhasset, New York, after a protracted illness unrelated to COVID-19.

The now-classic song “Everybody Plays the Fool” was written by Williams, Rudy Clark, and J.R. Bailey. It was first released in 1972 and has since been covered by a wide range of artists. Williams’ work has been sampled recently by musicians like Alicia Keys and Lil Wayne.

In 1968, Williams founded A Dish-A-Tunes LLC Publishing, a family owned and operated music company. During the last five decades Williams added over 500 songs to his music catalogue.

In 2004, the song “You Don’t Know My Name” recorded by Keys and produced by Kayne West on ”The Diary of Alicia Keys” won a Grammy and so did Williams since it sampled the 1975 song “Let Me Prove My Love to You,” co-written by Williams and performed by The Main Ingredient.

Some of his songs include “Love, Love, Love” (Donny Hathaway), “I Can’t See Me Without You” (The Impalas), “Let Me Prove My Love To You” (The Main Ingredient), “Only When You’re Lonely” (Holly Maxwell), “Seven Lonely Nights” (The Four Tops), “Keep on Holding On” (Margaret Reynolds) and “Hoping You Will Come Back” (Sandra Phillips).