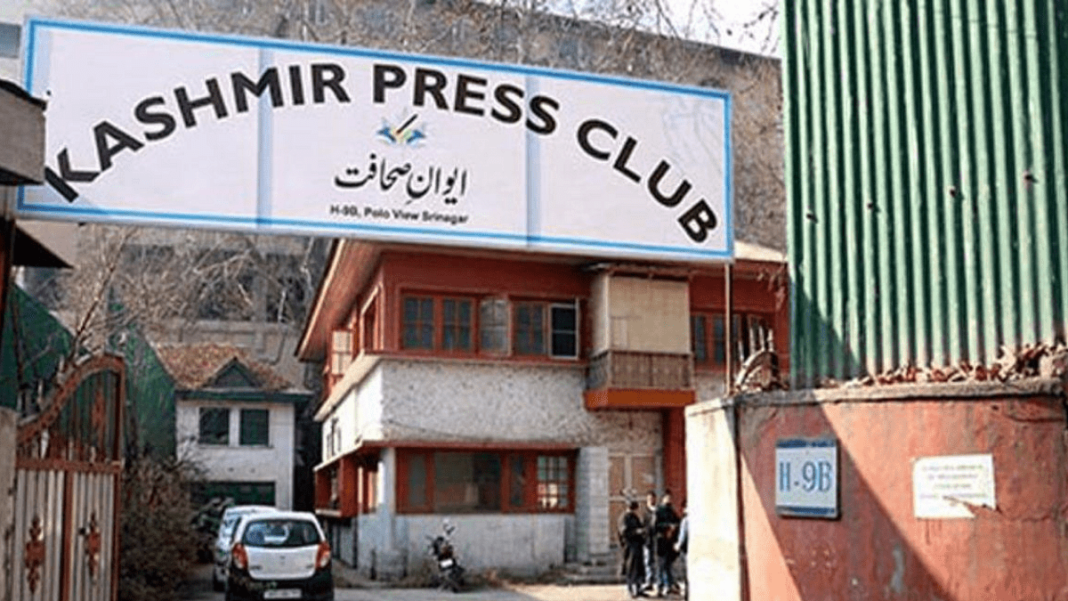 West News Wire: Journalists in Indian-administered Kashmir have condemned the “forcible and unlawful takeover” of an independent media organisation by a group of journalists with the suspected support of local authority.

On Saturday, a group of journalists barged into the KPC administration’s office in Srinagar, the region’s largest city, and presented themselves as “interim” office-bearers, according to outgoing KPC members.

“On January 15, a gang of journalists barged into the club office and forcibly took control of the club by holding the office members hostage, the day after the management ordered weekend closure due to the COVID spike. For this extremely condemnable and entirely unlawful move, a significant number of police and paramilitary forces were deployed ahead of time,” the outgoing KPC office-bearers stated in a statement. calling the move a “dangerous precedent by the administration”.

“This move, in which a group of journalists self-appointed itself as an ‘interim body’ is uncivil, illegal, unconstitutional and without any precedence.”

The Kashmir Press Club (KPC), formed in 2018, is the largest independent media body in the Himalayan region, with at least 300 journalists as its members.

The controversial move comes at a time when the press in Kashmir faces increasing curbs and free speech is under attack. Kashmiri journalists are often questioned and criminalized for their works.

On January 5, a 26-year-old journalist with a local portal, Sajad Ahmad Dar, was booked and arrested for posting video of a protest on his social media accounts.

The move is seen as yet another attempt by the government to interfere in the functioning of the press in the restive Himalayan region.

Local media outlets were outraged by the takeover, which they described as a “illegal and arbitrary seizure of the KPC with open support from the local administration.”

Several journalists in the region went to social media to vent their frustrations.

“A group of ‘journalists’ in Srinagar, aided by the local administration, seize the hard-won Kashmir Press Club with the presence of police and paramilitary soldiers and depose an elected body.” On Twitter, renowned journalist Parvaiz Bukhari remarked, “Reveals a lot about the present context in which journalists operate in the besieged region.”

The Editor’s Guild of India in a statement condemned the “forcible takeover” of KPC and termed it as a “manifestation of the continuing trend to smother press freedom” in the region.

“The Editors Guild of India is aghast at the manner at which Kashmir Press Club, the largest journalists association in the Valley [Kashmir], was forcibly taken over by a group of journalists with the help of armed policemen on January 15,” it said on Sunday.

The Guild demanded “an independent inquiry as to how armed forces entered the Club premises” and accused the local administration of deliberately delaying the registration process of the Club.

The outgoing KPC office-bearers say the re-registration of the Club was delayed by the local administration, which is directly run from New Delhi. The elections, they said, was delayed as the registration could not be completed.

The KPC had been planning to hold elections for new office-bearers on February 15 and outgoing KPC General Secretary Ishfaq Tantray told reporters that they had “no idea about the formation of a new body”.

“We were preoccupied with the re-registration procedure and the start of the election process for the new body.” “Whatever this unhappy bunch has done has no legal foundation,” Tantray added.

“With the KPC being defunct for the last six months after the mandate of the previously elected body ended, a new interim body was chosen on Saturday, January 15, 2022, with renowned journalist M Salim Pandit as the President,” the so-called interim body said in a statement. until elections are conducted in a free and fair way.”

According to sources, Pandit justified the contentious action, saying that the “body was created for the benefit of the media in Kashmir”.