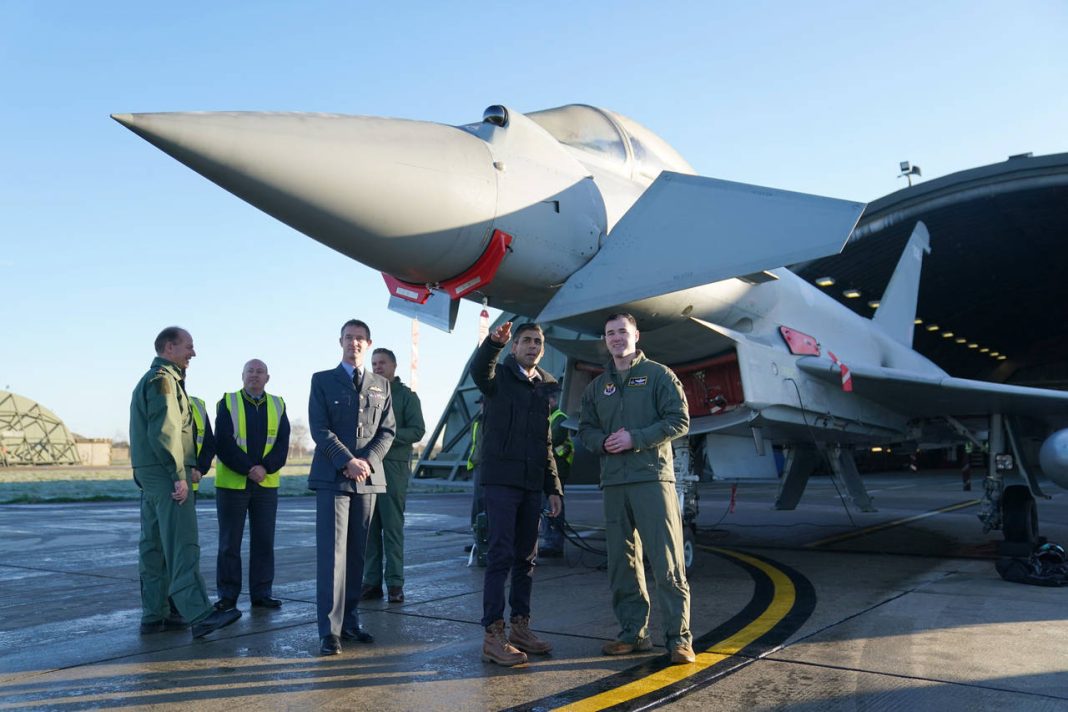 West News Wire: Britain, Italy, and Japan announced their plans to work together to develop a future fighter plane on Friday. UK Prime Minister Rishi Sunak claimed that the project will ensure national security and protect thousands of employment.

The three countries promised to maintain “interoperability” among all the allies against threats from countries like China and Russia, while also holding out the possibility of collaboration with European and US allies who are creating their own “sixth-generation” planes.

The three countries’ expensive ongoing research on new aerial warfare equipment, from stealth capability to high-tech sensors, will be combined into the new “Global Combat Air Programme,” which is expected to produce its first jets by 2035.

Sunak said, “We’re one of the few nations in the world with the capacity to produce technologically superior fighter aircraft.

“That’s important because it means we can keep the country safe from the new threats that we face,” he said.

“It also adds billions to our economy and supports tens of thousands of jobs across the country. But it’s also good for our international reputation.”

The announcement was accompanied by a set of images showing an artist’s impression of the sleek new jets flying past Mount Fuji and over London and Rome.

In a joint statement, the three countries said the project would “accelerate our advanced military capability and technological advantage” at a time when “threats and aggression are increasing” worldwide.

The objective is to develop by 2035 a twin-engine stealth aircraft that could be operated with or without a crew, that would be impervious to radar and boast features such as laser-directed weapons and a virtual cockpit.

For the current “fifth generation” of fighters, the three nations are relying on US-made F-35s.

For Britain and Italy, the new jet codenamed Tempest would replace the Eurofighter Typhoon developed with other European allies including Germany and Spain.

For the next generation, Germany and Spain have joined France in their own project, while the United States has separate plans in development, as do China and Russia.

Japan’s prior project to build a next-generation fighter plane, named F-X, was reportedly expected to cost more than five trillion yen (around $40 billion).

Friday’s announcement comes with Tokyo poised to make the largest overhaul to its security strategy in decades.

The government plans to ramp up defence spending a controversial move in a nation whose constitution limits military capacity to ostensibly self-protective measures.

But the war in Ukraine, repeated missile launches from North Korea and growing pressure from China have helped build support for a bigger budget.

Japan’s Nikkei business daily said that companies Mitsubishi Heavy Industries, BAE Systems and Leonardo would oversee the new project, which is Tokyo’s second joint development after its SM-3 missile made with Washington.

The Italian company Avio Aero, the Japanese IHI Corp., and the British jet manufacturer Rolls-Royce are also anticipated to participate.

The Global Combat Air Programme is the most recent well-known instance of allied nations working together sporadically to improve defense technology.

AUKUS, a new US-UK-Australian alliance in the Pacific, was established last year when the United States grabbed off a lucrative deal from France to equip Australia with submarines.

Following a ministerial conference this week in Washington, the US and Australia announced they would welcome Japanese troops into three-way rotations, promising to present a united front in the face of China’s growing military advancements.