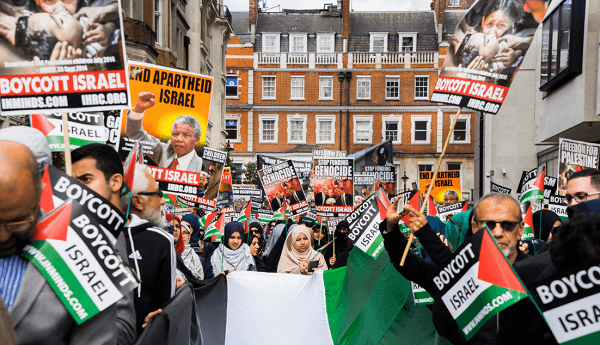 West News Wire: Officially known as International Quds Day, Quds is the Arabic name for Jerusalem. It is an annual event observed on the final Friday of Ramadan that was started by Iran in 1979 to show solidarity for the Palestinians.

Protests against Israel’s occupation of East Jerusalem are held in a number of other nations, primarily in the Arab and Muslim worlds, on Quds Day. Rallies are held in numerous cities throughout the world by both Muslim and non-Muslim groups.

Protests on Quds Day have taken place around the Middle East, as well as in London, Berlin, and the United States. In 2018, 3,000 people marched in London, while 1,600 people protested in Berlin.

In 2017, there were rallies in at least 18 cities across the United States.

“How long will it be before Palestinian lives matter?” questioned Lesley Williams of Jewish Voice for Peace at the event. “How can it be when the news reports on every single Israeli death but overlooks the tens of thousands of Palestinians who die every year?”

“We want Palestine to be free!” said Frank Chapman of the Alliance Against Racist and Political Repression to the audience. Our solidarity is unconditional; no matter how you fight in your liberation movement, we stand with you!”

“We are both diasporas who know too well the duplicity of the erstwhile coloniser states that today turn a deaf ear to our people,” Emma Lozano of Pueblo Sin Fronteras added.

The latest development comes as thousands of people across the globe have taken to the streets to deplore Israeli violence against Palestinians at the al-Aqsa Mosque and elsewhere in the occupied territories.

The Greek Patriarchate claimed earlier this month that it was “bore up with [Israeli] police limitations on freedom of worship” and that it had “determined, by the might of the Lord, not to compromise its right to perform spiritual services in all churches and squares.”

The Church of the Holy Sepulchre, like al-Aqsa Mosque, is controlled by a decades-old network of informal arrangements known as the status quo. Israeli abuses of those agreements have enraged Christians, as they have Muslim worshipers in al-Aqsa.

Since the commencement of Ramadan, which began in early April, the al-Aqsa Mosque compound has been at the heart of weeks of increased Israeli aggression against Palestinian pilgrims.

Israeli forces have killed at least 19 Palestinians, including three boys and three women, and injured hundreds more there in recent weeks.

On this day, people all over the world condemn Israel’s open terrorism in the face of increased violence against Palestinians. This year, rallies and protests began early around the world in response to Israeli troops’ brutality towards Palestinians since the start of Ramadan, the Muslim holy month.

Local organisations had organised an emergency gathering the day before before the Israeli consulate in Los Angeles, where speakers spoke about recent Israeli atrocities, such as the tragic ambush of a caravan of Palestinians heading to a refugee camp in Jenin and the attacks on the al-Aqsa Mosque.

The crowd, made up mostly of Palestinian youths, chanted “From the River to the Sea, Palestine Will be Free!” and “Long live the Intifada, Intifada Revolution!”

Following the recent worldwide protests, Israel launched a new round of violence against Palestinians across the occupied West Bank, including al-Quds, on Friday and Saturday, in which a number of Palestinians were arrested and injured.

The Israeli military also claimed three rockets were fired into the occupied areas from the Gaza Strip on Friday night, accusing the Palestinian resistance group Hamas for the alleged missile attack.

Israeli warplanes bombarded Gaza the day before over an alleged missile launch from the blockaded territory. Later that day, Hamas issued a statement saying that the Israeli airstrike will further reinforce the resistance movement’s resolve to protect and defend Palestinians in occupied al-Quds.

The Palestinian Authority blamed Israel for the effects of the current Al-Aqsa tensions on Sunday.

In a statement reported by state news agency Wafa, authority spokesperson Nabil Abu Rudeineh stated, “We appeal on the US government to break its silence and stop this action that would inflame the entire region.”

Last May, Israel launched a huge attack on the Gaza Strip, killing over 250 Palestinians and causing severe damage. The 11-day conflict came after weeks of Israeli brutality against Palestinians in al-Quds, similar to what has been seen in recent weeks.

The recent uptick in Israeli aggression has fueled fears of a new Israeli assault on Gaza.