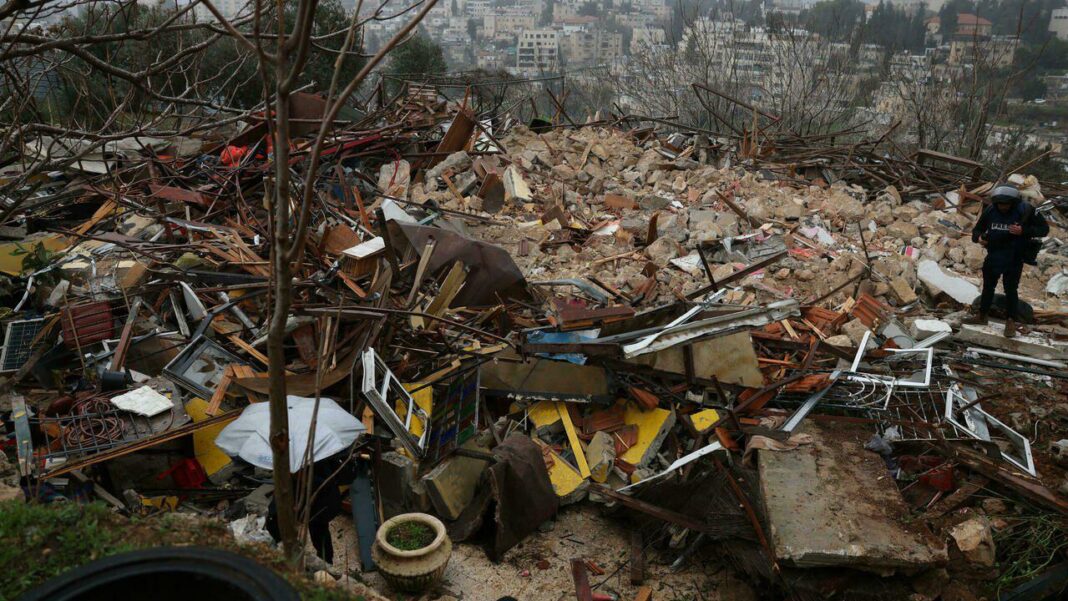 West News Wire: In the sensitive East Jerusalem neighborhood of Sheikh Jarrah, Israeli police demolished a Palestinian family’s home and detained at least 18 individuals as they carried out a disputed eviction order.

Israeli officials arrived early in the morning to the home of the Salhiya family, who had been threatened with eviction since 2017.

“Family members residing in the unauthorised constructions were offered several opportunity to surrender up the land with approval,” it stated.

The predawn demolition took place in Sheikh Jarrah, an East Jerusalem neighborhood where attempts by Jewish settlers to evict longtime Palestinian residents have sparked protests that last year helped lead to an 11-day war between Israel and Gaza.

Security forces monitored as the house was demolished with the help of heavy machinery.

Earlier in the week, the Salhiya family members held a tense standoff with police officers who had come to evict them from the property, going up to the building’s roof with gas canisters, threatening to set the contents and themselves alight if they were forced out of their home.

Police had to eventually back off.

The Salhiya family claims they purchased the property before 1967.

It says the Salhiya family is squatting on the land and that the buildings were constructed illegally in the 1990s.

A Jerusalem court ruled last year in favor of the city and authorized the eviction. The family has appealed and is awaiting a ruling, but the judge did not freeze the eviction order.

A lawyer for the Salhiya family said the demolition carried out early Wednesday was “illegal” since the municipality had received the court’s permission to vacate the property but not destroy it.

“The eviction decision is for Mahmud Salhiya and his wife and not for the rest of the family,” said attorney Walid Abu-Tayeh, noting a court hearing will be held on January 23 on the issue.

He said police had arrested 20 people during the operation, six of them Israelis, with the latter being released, adding that “the Arab detainees were assaulted.”

Jerusalem deputy mayor Fleur Hassan-Nahoum said Tuesday the plot that the Salhiya family claimed as theirs belonged to private Palestinian owners who then sold it to the city, which allocated it for classrooms for special needs Palestinian children.

Human Rights Watch Israel and Palestine director Omar Shakir called the eviction “cruel” and stressed that the Salhiya family had previously been forced from their west Jerusalem home during Israel’s creation in 1948.

Wednesday’s eviction made them “two-time refugees”, he added.

Dozens of Palestinian families in East Jerusalem are at risk of eviction by Jewish settler organisations, and thousands face the threat of demolition because of discriminatory policies that make it extremely difficult for Palestinians to build new homes or expand existing ones.

In certain situations, Jewish Israelis have filed legal claims to land holdings they allege were stolen unlawfully during the 1948 conflict that preceded Israel’s founding.

Palestinians claim that their properties were legitimately acquired from Jordanian officials during the period when East Jerusalem was under Jordanian administration between 1948 and 1967.

During the 1967 Six-Day War, Israel took East Jerusalem and then annexed it in a move that was not recognised by the international world.

Over 200,000 Jewish settlers have subsequently moved into the city’s eastern part, escalating tensions with Palestinians who see it as the future capital of their state.