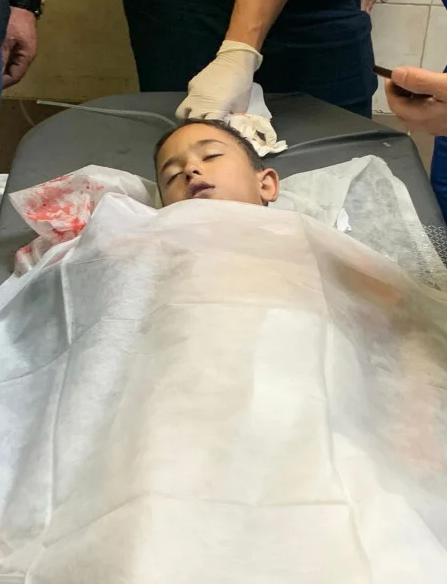 West News Wire: Medical sources report that a Palestinian child from the central West Bank has died after falling from a height while avoiding Israeli police who were after him.

According to medical officials at Beit Jala Governmental Hospital and the official news agency of Palestine, Wafa, 7-year-old Rayyan Yaser Suleiman was admitted to the hospital after his heart stopped beating. He was unsuccessfully attempted to be revived and was declared dead shortly after that.

They continued by saying that the terrified child fled from Israeli soldiers who were chasing him and the other kids as they left their school. Then Rayyan died after falling from a height.

Israeli troops chased the Palestinian child to their home, according to the boy’s father Yaser, who also claimed Rayyan’s heart stopped beating because he was apparently so scared.

He noted that he put his son in his car and rushed to hospital but was stopped half way by Israeli soldiers, who checked his son. They let him drive on after they had made sure he was dead.

The development comes hours after Israeli forces arrested 28 Palestinians from various parts of the occupied West Bank during overnight operations.

Local and security sources, requesting anonymity, said Israeli troops rounded up 18 Palestinians in multiple raids across the occupied al-Quds district, including the Occupied City of al-Quds.

Gun-toting soldiers detained two Palestinians, including a former prisoner, and ransacked the houses of their families in Biddu town, located 6 kilometers (3.7 miles) northwest of al-Quds.

Heavily-armed Israeli police forces also raided the al-Quds neighborhood of at-Tur, and detained seven Palestinians a couple along with their three children besides two sisters.

A convoy of Israeli military vehicles stormed Beit Ummar town, and soldiers rounded up another Palestinian there.

They also rounded up four others, including two minors from the southern part of al-Khalil city and two youths in the course of confrontations in the vicinity of al-Shuhada Street checkpoint.

Moreover, a resident of Askar refugee camp, located on the outskirts of Nablus city, was detained during skirmishes with Israeli troops at Huwwara checkpoint.

At the intersection leading to the village of Rummanah, soldiers apprehended another Palestinian and took his motorcycle.

A Palestinian was stopped and held by Israeli forces guarding the Jaba checkpoint.

Recently, Israeli soldiers have been carrying out nightly raids and assassinations in the northern part of the occupied West Bank, primarily around Jenin and Nablus, where fresh bands of Palestinian resistance fighters have formed.

Since the beginning of the year, Israeli troops have murdered more than 150 Palestinians in the Israeli-occupied territories, including 51 during Israel’s three-day assault in August on the besieged Gaza Strip.

More than 30 of those who perished were either from Jenin or died nearby.