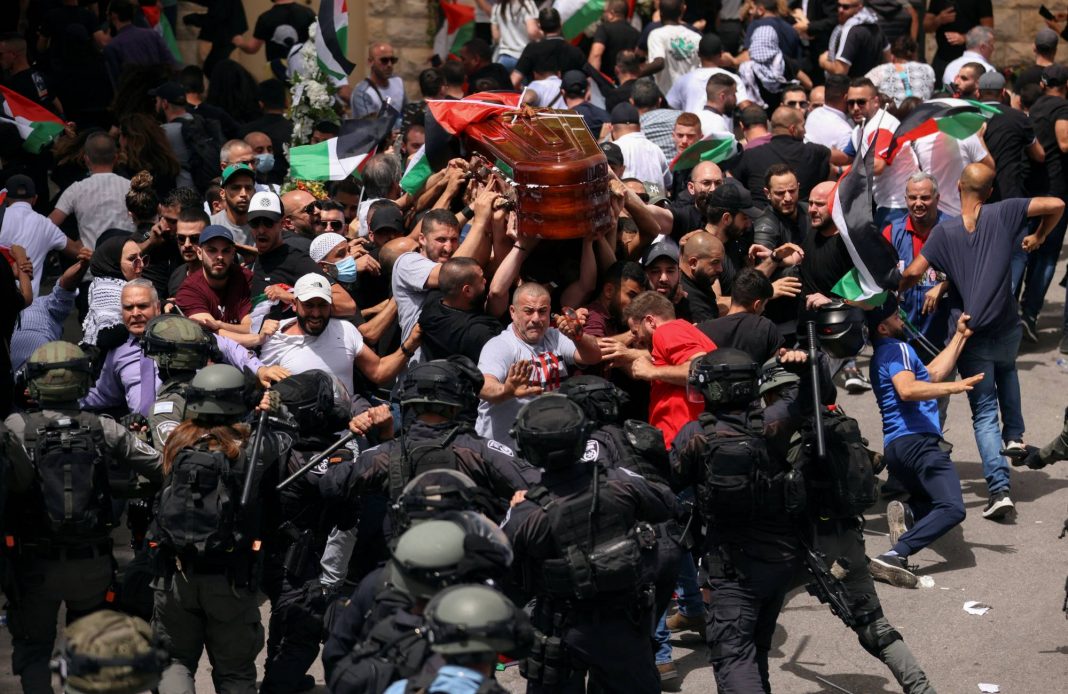 Wests News Wire: The violence started when Palestinian mourners began to transfer Abu Akleh’s casket from the St Louis French Hospital in the Sheikh Jarrah area of the occupied al-Quds, according to the Palestinian Information Center (Palinfo).

Mourners attending the funeral procession of legendary Palestinian journalist Shireen Abu Akleh, who was martyr by Israeli troops in the occupied West Bank city of Jenin, were accosted and beaten by Israeli police.

“Dozens of injuries during the occupying forces’ storming of the French hospital in al-Quds,” Palinfo reported, citing the city’s Red Crescent.

At least 33 individuals were injured in the Israeli attack on the burial procession, according to the Palestinian Red Crescent.

During the parade, Israeli soldiers arrested at least four mourners, including at least two for waving the Palestinian flag in occupied al-Quds, according to media sources.

Thousands of Muslim and Christian Palestinians from Jerusalem al-Quds and across the occupied territories, including many colleagues and fellow journalists came to pay their respects to the veteran Al Jazeera journalist, who was shot in the head Wednesday while covering an Israeli raid against the city of Jenin.

Abu Akleh’s body arrived at the Roman Catholic Church on Friday afternoon, where prayers for her soul were held before it was taken to the cemetery. The burial was marked by the ringing of bells in al-Quds churches, despite the occupation police and military barricades on the routes leading to the cemetery.

Abu Akleh was well-liked by viewers all around the Muslim world, notably in Palestine, where she spent more than two decades chronicling Israeli crimes and occupation. Her assassination has demonstrated yet again how far the Israeli state will go to conceal its mistreatment of Palestinians.

Video footage from the moments after Abu Akleh was shot showed the 51-year-old journalist wearing a blue vest marked “Press.” At least two of her colleagues who were with her said they had deliberately come under Israeli sniper fire.

Mustafa Barghouti, a member of the Palestine Liberation Organization’s Central Council, condemned the assassination of Abu Akleh on Friday, stating that Israel only knows the language of force and that only resistance will prevent the occupying regime from continuing to attack.

Tel Aviv’s attempt to hide its crime of assassinating the legendary Palestinian journalist will not succeed, according to Barghouti.

What is happening in Palestine, according to the top Palestinian official, demonstrates the dishonesty of international standards in dealing with Israeli crimes.

He went on to say that the Palestinians are unified in their resistance to the occupying forces and in their determination to demand their rights.

The statement also called for “an early, full, transparent, and impartial investigation” into her murder, a rare instance of Security Council agreement on a subject involving Israel.

The UN Human Rights Office has also demanded a thorough and independent inquiry into the death, claiming it may have been a war crime.

According to officials who spoke to AFP on the condition of anonymity, the Security Council deliberations on Friday were unusually difficult.

According to diplomatic sources and different versions of the declaration obtained by AFP during the discussions, China successfully pushed the US to remove paragraphs condemning abuses against the media around the world, defending their freedom, and urging their protection while covering military operations.

The death of Abu Akleh came amid escalating violence in the occupied West Bank and Gaza in recent years, according to UN experts.

According to the statement, the number of Palestinians killed in clashes with Israelis reached its highest level since 2014. It also occurred during a spike in attacks against Palestinian journalists.

She was slain for once again exposing how Israel had rounded up, bludgeoned, “raided,” evicted, incarcerated, traumatized, tortured, murdered, and terrorized Palestinian after Palestinian, day after day, week after week, month after month, year after year, decade after decade.

Abu Akleh did an excellent job. Despite the humiliations, horrors, and dangers, she did it with grace, patience, and fortitude. Bearing witness was her duty, obligation, and responsibility.

Palestinians face being slaughtered every day simply for being Palestinian.

Every day, Palestinians face being murdered simply for being Palestinian, regardless of where they live: Gaza, Jerusalem, or the West Bank.

It does not matter whether they are young or old, a man or a woman, Muslim or Christian every day, Palestinians risk being murdered because they are Palestinian.