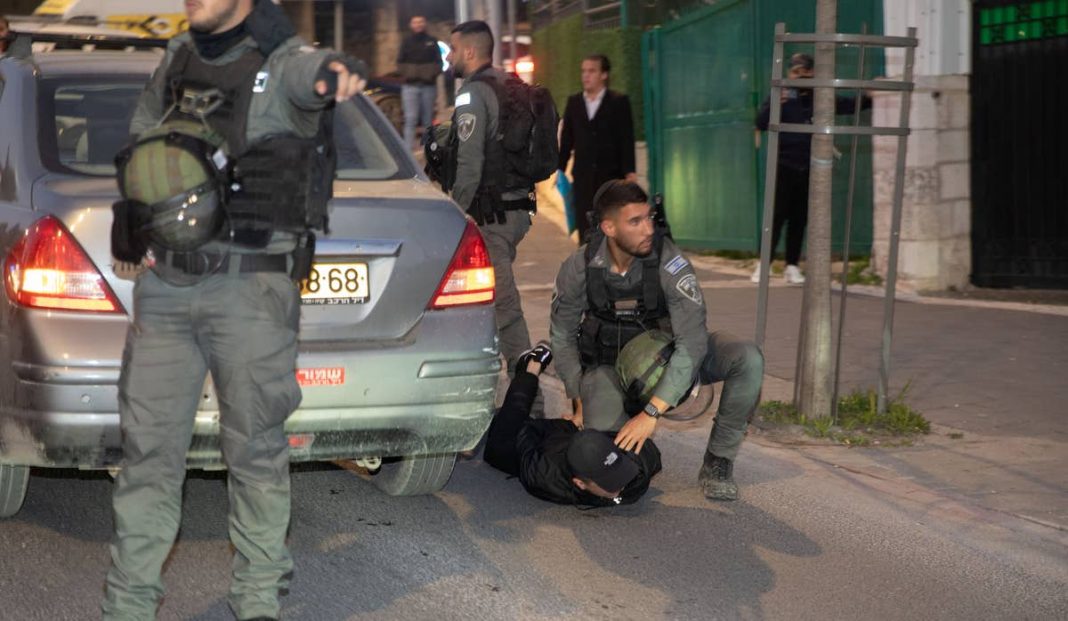 West News Wire: During a visit by a controversial far-right Jewish politician, Israeli police said they arrested eight persons for alleged involvement in “public rioting and violence” in the occupied East Jerusalem neighborhood of Sheikh Jarrah.

On Sunday, squabbles erupted when Itamar Ben Gvir of the far-right Religious Zionism alliance opened a parliamentary office in Sheikh Jarrah, ostensibly to show solidarity for the town’s Jewish residents.

“Israeli police will continue to act with determination and zero tolerance for any form of violence, public order violations, or attempts to damage police personnel or civilians in violation of the law,” according to a statement.

Tensions that erupted in Sheikh Jarrah last year  as several Palestinian families faced eviction by settler groups  in part sparked the May war between Israel and armed groups in the Gaza Strip.

Efforts by settler groups to expand the Jewish presence in occupied East Jerusalem, which Palestinians claim as their future capital, have further spurred hostilities.

Ben Gvir, a Jewish nationalist with a long history of incendiary comments about Palestinians, accused police of failing to react to alleged arson attacks on a settler home in Sheikh Jarrah.

“Jewish lives have become worthless,” Ben Gvir charged in a tweet before his visit.

He told reporters in Sheikh Jarrah, where he set up his “make-shift office” under a tent, that he would remain there until police “looked after the security of the [Jewish] residents”.

In a move that risked sparking fresh hostilities, Ben Gvir urged supporters to gather in the area.

Palestinians were also called on to mobilise, while a group of Jewish Israelis that oppose Ben Gvir circulated a petition online urging people to head to Sheikh Jarrah as a show of support for its Palestinian residents.

Read More
A year after the normalization of relations; Saudi Arabia and the options ahead

“The residents of Sheikh Jarrah are confronting an intensifying, coordinated effort of settler and police violence in the past hours,” El-Kurd said.

Voicing concern over Sunday’s “violent clashes”, the European Union in a tweet said “irresponsible provocations and other escalatory acts in this sensitive area only fuel further tensions & must cease”.

The Palestinian Authority, based in the Israeli-occupied West Bank, condemned Ben Gvir’s visit as a “provocative and escalating move that threatens to ignite violence that will be difficult to control”.

“Many young Palestinians were arbitrarily arrested from the scene,” El-Kurd wrote on Twitter.

Hamas, the Palestinian group that controls Gaza, warned there would be “consequences” over Israel’s repeated “attacks” on Sheikh Jarrah.

Six people were arrested during unrest in the neighborhood late Saturday.

Israel captured East Jerusalem in the 1967 Six Day War and later annexed it, a move not recognised by most of the international community.