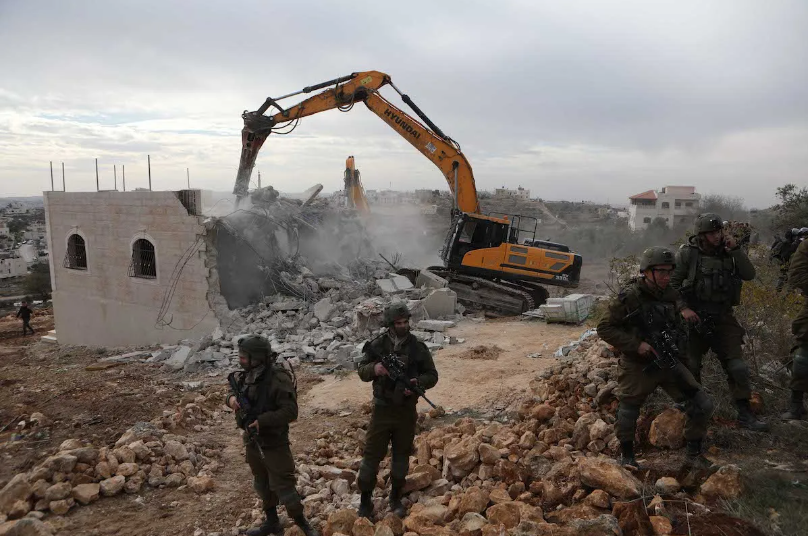 According to the Israeli military’s bulldozers, Yusef Aasi and Yehya Miri’s homes were demolished. The two prisoners are accused by the Israeli government of killing the settler back in April, according to the Middle East Eye news and research website, which cited Palestinian media sources.

The buildings are situated in the community of Qarawat Bani Hasan in the northern region of the West Bank that is under Israeli occupation.

The occupying dictatorship has been holding the men, who are in their 20s, since April 29 after they allegedly carried out a fatal shooting attack against “the Israeli security guard Vyacheslav Golev” at the entrance to the illegal town of Ariel.

Footage obtained from Twitter captured the moment when the forces bombed Yehya Miri’s house, turning the structure to dust.

Before razing the houses, Israeli military vehicles stormed the village and closed its entrances, imposing a security cordon on the neighborhoods in which the residential buildings were located.

“Residents of a number of adjacent homes were forced to evacuate as snipers were deployed on their roofs,” the MEE added.

Also on Tuesday, Israeli forces bulldozed a café in the north of the occupied territories, and flattened a home that was under construction in a village southwest of the city of Jenin.

Separately, it was reported that an Israeli panel based in al-Quds had advanced creation of a new Israeli-populated neighborhood in the holy occupied city, which bisects two Palestinian areas.

The so-called District Planning and Building Committee approved the project that breaks up contiguity between Sur Baher and Beit Safafa on Monday, The Times of Israel reported.

The committee plans to build as many as 14,000 illegal settler units in the neighborhood that it intends to set up in an area known as the Lower Aqueduct located northwest of the city of Bethlehem.

“The new neighborhood will connect” the Israeli neighborhoods of Givat Hamatos and Har Homa in East al-Quds.

The Israeli regime occupied the Palestinian territory of the West Bank, including East al-Quds, in a heavily-Western-backed war in 1967.

Ever since, it has dotted the territory with hundreds of illegal settlements that have come to house hundreds of thousands of Israeli settlers.

Palestinians want the West Bank as part of a future independent state with East al-Quds as its capital. The Israeli regime, however, lays claim to the entire city as its so-called “capital.”

Hagit Ofran, a member of the anti-settlement organisation Peace Now, commented on the Monday development, saying, “Since 1967, not even one new community has been planned for Palestinians [in East al-Quds], whereas 12 have been constructed for Israelis.”

He continued, “For the Palestinians, [however], [it] launched plans for merely 600 dwellings.” Over the years, the Israeli authority has initiated and planned around 57,000 illegal settler units for Israelis in East al-Quds.

Ofran complained that the new Israeli suburb will seize the final remaining piece of land on which Beit Safafa could expand, in addition to isolating the Palestinian communities from one another.