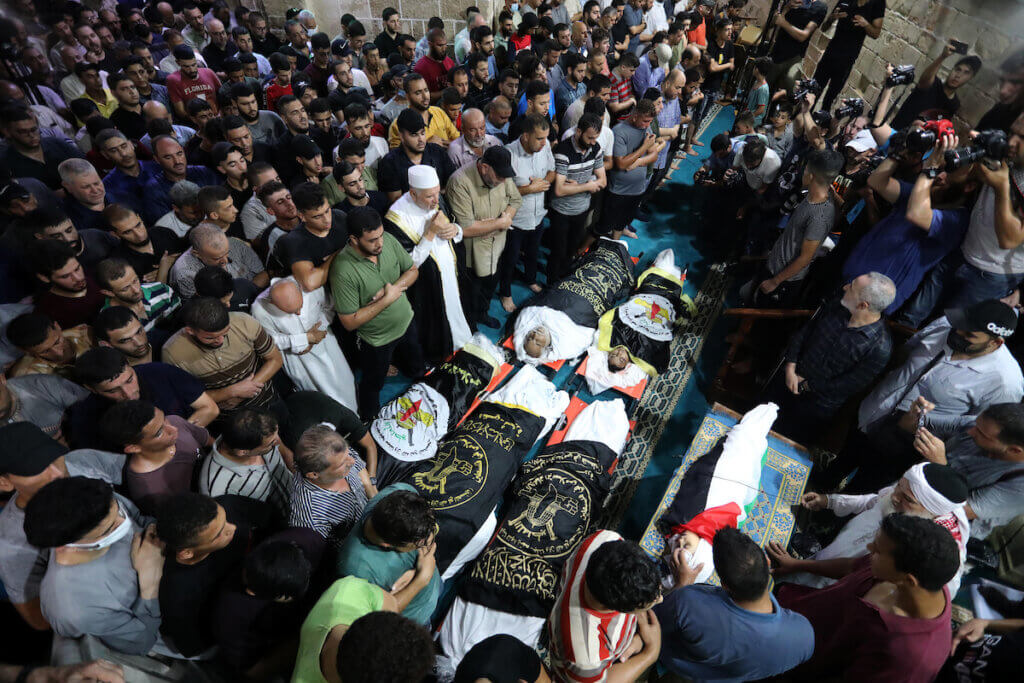 West News Wire: Six children and a senior commander of a Palestinian armed organization are among the 29 people killed in the Gaza Strip as Israeli jets keep hitting the confined region.

Islamic Jihad acknowledged in a statement on Sunday that its commander in the southern Gaza Strip, Khaled Mansour, killed in an Israeli attack on Saturday.

Since Israel started striking Gaza on Friday, when Taysir al-Jabari, the organization’s commander in the north, was killed, Mansour is the second senior member of Islamic Jihad to die.

Israel has issued a seven-day ultimatum for its campaign against Islamic Jihad, and its assaults on Gaza have already demolished residential buildings and hit refugee camps.

At least four children were killed in a blast close to the Jabaliya refugee camp on Saturday, according to Hamas, the group that governs the Gaza Strip. It blamed Israel for the deaths, but the military denied any responsibility, saying the explosion was caused by a failed rocket launched by Islamic Jihad.

At least 250 others have also been wounded, according to the Ministry of Health in Gaza.

Palestinian fighters have responded to the bombings by launching more than 400 rockets at Israel. Most of the rockets were intercepted, and there have been no reports of serious casualties, according to the Israeli ambulance service.

The violence has raised fears of another war on Gaza by Israel, just 15 months after a monthlong conflict that killed more than 260 people.

The last war caused widespread devastation here in the Gaza Strip. A year later, there has been almost no reconstruction. “This isolated coastal territory is impoverished, its people are barely recovering. And many fear another round of escalation.”

About 2.3 million Palestinians are packed into the narrow coastal Gaza Strip, with Israel and Egypt tightly restricting the movement of people and goods in and out of the enclave and imposing a naval blockade, citing security concerns.

Israel stopped the planned transport of fuel into Gaza shortly before it launched its attacks on Friday, crippling the territory’s lone power plant and reducing electricity to about four hours per day and drawing warnings from health officials that hospitals would be severely affected within days.

“[The Israelis] are attacking civilians, they are attacking premises, residential areas. Nobody knows what will happen in the coming hours,” said Dr Medhat Abbas, director at the Gaza health ministry.

“This is an appeal to extend a helping hand to the ministry of health in Gaza Strip right now. There’s a shortage of electricity. It’s been declared now that it will only be four hours a day. This means we will rely in the hospitals on generators. Generators consume half a million litres every month. We do not have this fuel right now.”

Egypt’s President Abdel Fattah el-Sisi said Cairo is talking “around the clock” with both sides to ease the violence.

An Egyptian intelligence delegation headed by Major General Ahmed Abdelkhaliq arrived in Israel on Saturday and would be travelling to Gaza for mediation talks, two Egyptian security sources told the Reuters news agency. They were hoping to secure a day’s ceasefire in order to carry out the talks, the sources added.

“Intensive efforts have been made this evening and the movement listened to the mediators, but these efforts haven’t reached an agreement yet,” an Islamic Jihad official told Reuters late on Saturday.

The latest round of tensions began earlier this week after Israeli forces arrested Bassam al-Saadi, an Islamic Jihad commander in the occupied West Bank. Al-Saadi was arrested during an Israeli raid in the city of Jenin, during which a teenager was killed. Israeli forces then sealed roads around the Gaza Strip and on Friday bombed an apartment building in the centre of Gaza City, killing al-Jabari, Islamic Jihad’s northern commander, and at least nine others, including a five-year-old girl and a 23-year-old woman.

The Israeli military also said it had arrested 19 more members of Islamic Jihad in the West Bank on Saturday.

Islamic Jihad is aligned with the governing Hamas, but often acts independently.

A further escalation of the violence could depend on whether Hamas would opt to join the fighting alongside Islamic Jihad.

Hamas spokesman Fawzi Barhoum has said “the Israeli enemy, which started the escalation against Gaza and committed a new crime, must pay the price and bear full responsibility for it”.

The Western-backed Palestinian Authority has also condemned the Israeli attacks.

The violence poses an early test for Israeli Prime Minister Yair Lapid, who assumed the role of caretaker leader ahead of elections in November, when he hopes to keep the top job.

Lapid, a centrist author and former TV host, has a weak background in security but has experience in diplomacy having served as the previous government’s foreign minister. As he competes with former Israeli Prime Minister Benjamin Netanyahu, a security hawk who oversaw the nation during three of its four wars with Hamas, a battle with Gaza may enhance his reputation and give him a boost.

While Iran, which supports Islamic Jihad, claimed Israel will “pay a terrible price” for the most recent assaults, the United States stated on Saturday that it fully supported Israel’s right to defend itself and urged all parties to avoid further escalation.

Middle East envoys for the United Nations and European Union have also voiced worry over the violence.