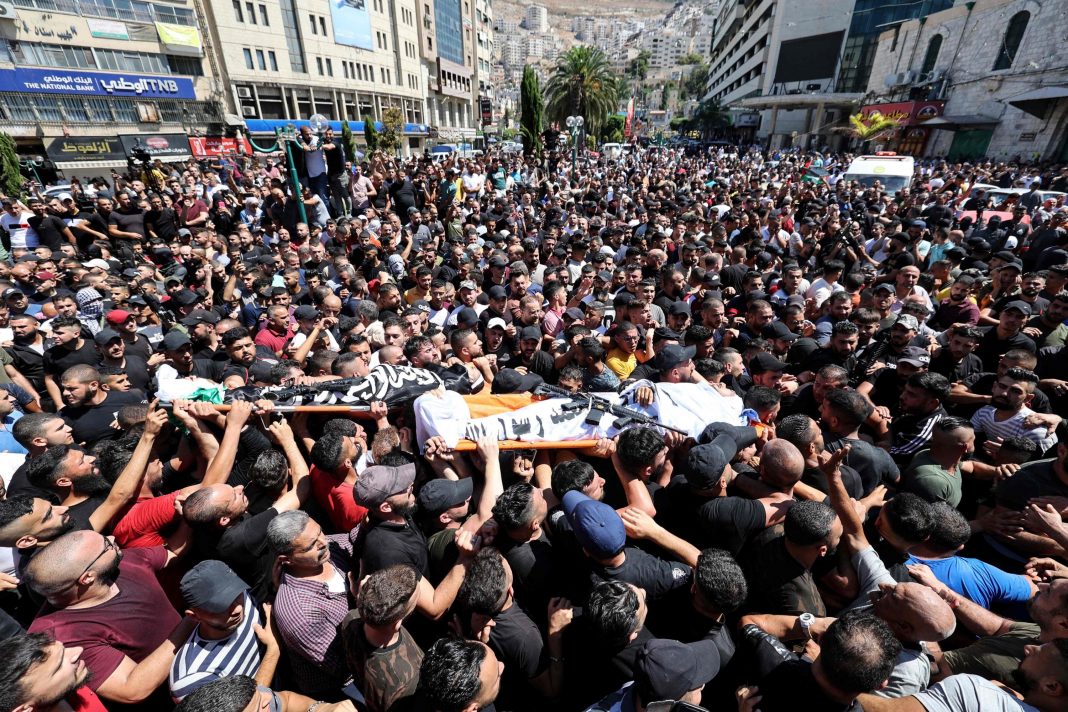 West News Wire: Palestinian officials claim that two Palestinian men were shot and killed by the Israeli army at a checkpoint south of Nablus in the occupied West Bank.

Imad Abu Rasheed, 47, was shot in the stomach, chest, and head at the Huwwara checkpoint on Route 60 in the northern occupied West Bank, according to the Palestinian health ministry’s announcement just before 2 a.m. (11:00 GMT) on Friday. Two other people were also critically injured.

Officials announced that Ramzi Sami Zabara, 35, had passed away from his injuries after a bullet to the heart at 6:30am (03:30 GMT).

Uncertainty surrounds the circumstances of their murder.

According to a statement from the Israeli army, its soldiers were “carrying out an operation close to the Hawara checkpoint” and “recognized suspicious vehicles and fired at them,” according to Israeli media.

The identity of the other wounded man was not immediately known, but he was reported to be in a stable condition after undergoing surgery at Rafidia hospital in Nablus city in the northern occupied West Bank.

Both Zabara and Abu Rasheed worked for the Palestinian Authority’s Civil Defence, and lived in the Askar refugee camp on the eastern outskirts of Nablus.

A Nablus-based journalist, Shadi Jarar’ah, told news reporters that they were in a car, along with the wounded man, when they were shot at by Israeli forces.

Jarar’ah said Israeli forces also shot at and arrested a fourth man who was in a separate car at the checkpoint.

A video shared by local media appeared to show Israeli soldiers transferring the body of a wounded Palestinian man on a stretcher into an ambulance.

PA Prime Minister Mohammad Shtayyeh said in a statement “we mourn the two martyrs” and said they were “killed during an ugly field execution crime carried out by occupation forces”.

Shtayyeh said the two were “among the finest officers and ranks of the Civil Defense, and pioneers of national, organizational and societal work in the Askar refugee camp”.

The PM also called on the “international community to provide protection to our people”.

The PA foreign ministry said in its own statement that it “condemns the execution” of the two men and “considers it organised and racist state terrorism”.

The city of Nablus and its surrounding villages, home to some 420,000 people, have been under a tight Israeli military blockade for more than two weeks. Hours before Friday’s events, the Israeli army said it eased some restrictions on movement in and out of the Nablus area.

Israeli forces have reportedly killed at least 186 Palestinians since the year’s beginning, including 134 in East Jerusalem and the West Bank under occupation and 51 in the besieged Gaza Strip, according to the Palestinian health ministry. 41 children are among the deceased, 17 of whom perished in Israel’s three-day attack on Gaza in August.

The year 2022 “is the highest year for Palestinian fatalities in the West Bank, compared to the same period in the previous 16 years,” according to the United Nations.