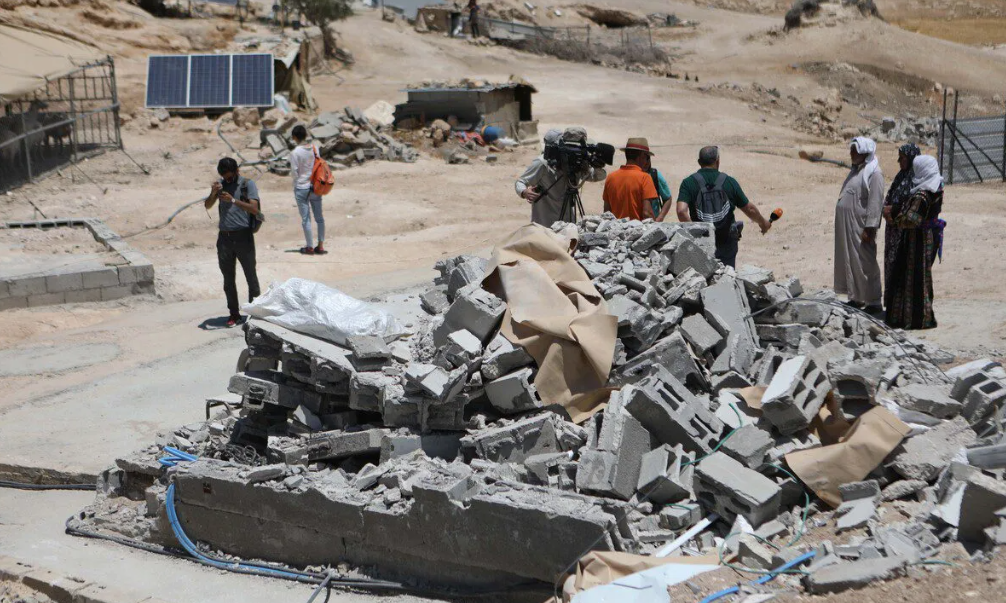 West News Wire: In the Masafer Yatta area of the southern occupied West Bank, where locals continue to be threatened with forcible eviction, Israeli soldiers have destroyed a recently constructed Palestinian primary school.

Locals and authorities said that an Israeli army operation had taken place in the town of Isfey al-Fauqa on Wednesday morning and resulted in the destruction of the school.

According to Nidal Younis, the leader of the local council in Masafer Yatta, “the Israeli occupation troops destroyed a school while it was in operation and pupils were inside.”

He said, “They used sound bombs to frighten the kids and get them out of the school.”

The interim injunction suspending a demolition order against the school was lifted by the Israeli High Court of Justice on Wednesday, according to the Norwegian Refugee Council.

The Coordinator of Government Activities in the Territories – COGAT, the Israeli military body responsible for administrative affairs in the occupied West Bank – said it demolished a building built illegally in an area designated as a closed firing zone.

The institution was built about a month ago and had been operating for less than two weeks. It served 22 students from four different villages in Masafer Yatta, up to the fifth grade.

It is one of more than a dozen schools built across the occupied West Bank under a programme by the Palestinian Authority’s Ministry of Education with funding from the European Union, Fadi al-Umour, an activist from Masafer Yatta, told news reporters.

All the schools built as part of this project are located in Area C the 60 percent of the occupied West Bank under full Israeli military control and are intended to challenge Israeli restrictions on Palestinian development there.

The European Union Delegation to the Palestinians said that it was “appalled by the news” of the demolition.

The Palestinian Ministry of Education condemned the demolition in a statement on Wednesday morning and described it as a “heinous crime”.

“It is an addition to the series of ongoing crimes by the occupation against the educational sector, and its targeting of children, students, educational cadres, and institutions [is] without regard for international charters and laws,” the statement continued, adding that such practices are “a flagrant violation of students’ right to safe and free education”.

The ministry said it had organised, just a day prior to the demolition, a visit by a delegation of diplomats and United Nations officials to the Isfey al-Fauqa school.

The school demolition comes days after an 18-year-old Palestinian student was shot dead by Israeli forces while he was on his way to school just outside of the Jenin refugee camp in the northern Israeli-occupied West Bank.

Al-Umour, who is the coordinator of Masafer Yatta’s protection and resilience committee, explained that “the construction of the Isfey school had not yet been completed when it was demolished, but the school was already operating”.

He added that the army also confiscated furniture from the school, including the students’ chairs, and said the school serves the four villages of Tuba, Isfey al-Fauqa, Isfey al-Tahta, and Mughayyer al-Adeed.

The nearest other school to the villages is about four kilometres away.

“This occupation targets everything – it targets our homes, education, our water, solar panels,” said Younis, the council head. “They think this will pressure people to leave so that they can displace them, so that they can ethnically cleanse Masafer Yatta.”

Masafer Yatta, which falls in Area C, is a region south of Hebron, where some eight villages, home to more than 1,200 Palestinians, including 500 children, are facing imminent forced displacement by Israeli authorities based on a May 2022 ruling by Israel’s High Court of Justice.

The ruling concluded a more than two-decade legal battle waged by the residents against their displacement. The Israeli army now has the green light to demolish their homes and force them out at any moment under the pretext that they live in an Israeli army “firing zone”.

Before Israel occupied the West Bank in 1967, a large number of families resided in this area. Their livelihoods are as shepherds and farmers, but they must contend with a variety of restrictive Israeli military practices, such as limitations on how they can maintain and build their homes and obstacles to using the water and electrical networks.

They also live under constant Israeli police, army, and settler aggression and are encircled by a belt of illegal Israeli settlements.

Under the hashtag #SaveMasaferYatta, activists and action groups from Palestine and abroad have started a global digital campaign in the hopes of bringing attention to the inhabitants’ immediate risk and putting pressure on Israel to stop its efforts to evict them.