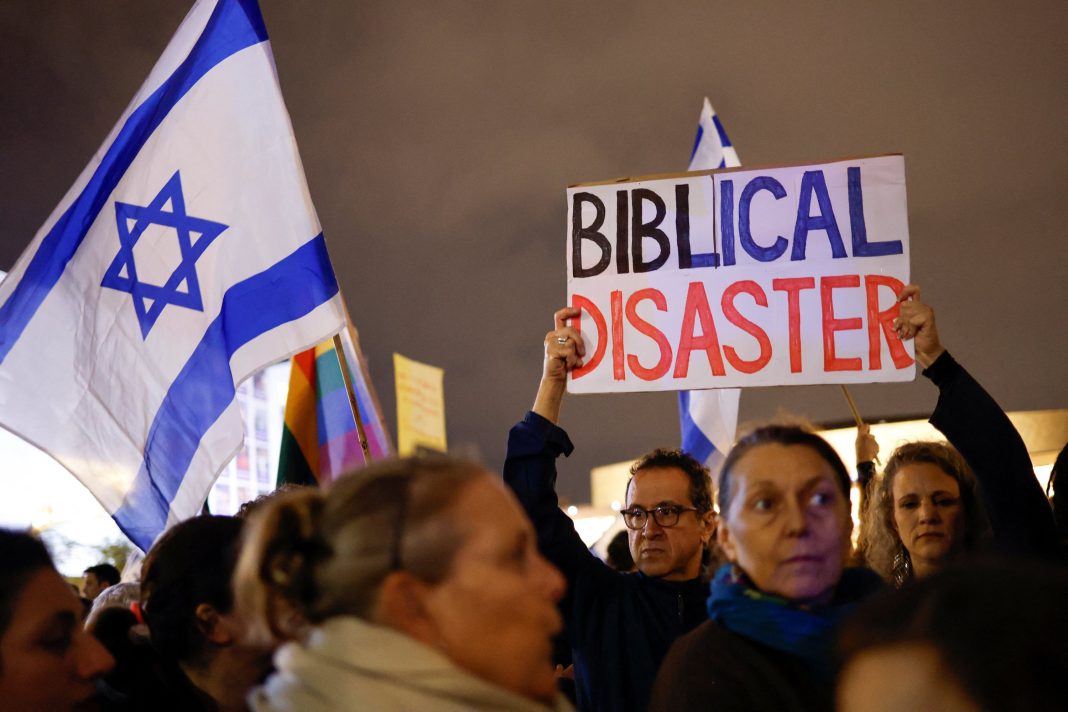 West News Wire: Thousands have protested in the streets of Tel Aviv, in the Occupied Territories, against the hardline government of the new Israeli prime minister, which is expected to start a dangerous political trend.

The demonstration took place on Saturday, with supporters holding up a giant banner that read “crime minister” in reference to Benjamin Netanyahu, the leader of the cabinet, who was charged with taking a bribe, fraud, and breach of trust in 2019 at the end of his previous term as prime minister.

Together against fascism and apartheid was one of the phrases on signs carried by other protestors.

Netanyahu has vowed to further the objectives of the radical political parties in exchange for their allegiance and cooperation. The cabinet has, therefore, been billed as the most far-right one yet in the occupying regime’s history.

The 73-year-old has already released a policy statement on the part of his cabinet, calling expansion of the regime’s illegal settlements across the occupied Palestinian territories a top priority.

Earlier this week, the regime’s new “justice minister” Yariv Levin also announced a reform program, including a “derogation clause” that allows Knesset to override the decisions that are made by the Supreme Court.

The protesters denounced the so-called reforms as a vehicle for Netanyahu to circumvent the repercussions of his corruption scandal.

The anti-Netanyahu Black Flag movement has also described Levin’s reforms as a “dangerous coup d’état,” asserting that the measures “will fail.”

In a related development, a human rights advocacy group has issued a report, asserting that the new far-right Israeli cabinet will consolidate occupation, racism and discrimination against Palestinians.

The Mossawa Center, which supports the Palestinians who reside in the 1948-occupied lands, issued the warning.

According to the report, the coalition agreements reached by the parties in the new Israeli cabinet support the extension of the regime’s illegal settlements throughout the Galilee and Negev regions as well as the West Bank, which was conquered in 1967.

The accords also make it easier for the Israeli government to maintain segregation by enabling the establishment and upkeep of residential communities based on pretended religious beliefs.

Netanyahu was recently blasted by the Palestinian foreign ministry as “a fascist, who has constantly taken aggressive movements against Palestinians and the sacred al-Aqsa Mosque, and has frequently fostered bloodshed and terror with his inflammatory statements, ugly threats, and contentious deeds.”