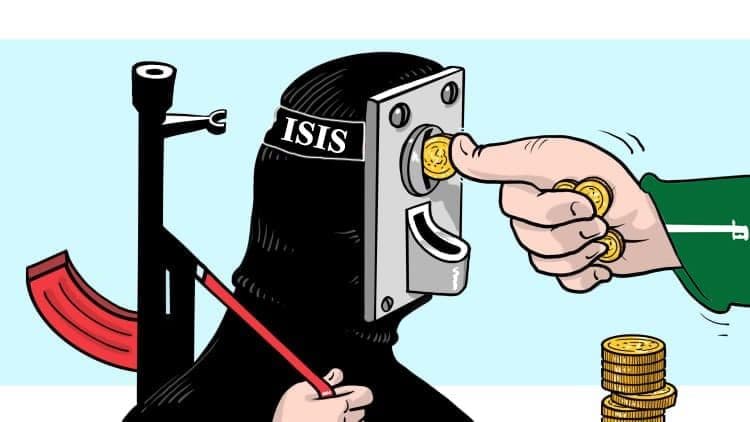 West News Wire: Its a common accusation that the House of Saud is allowing a flow of money to finance ISIS. But the Saudi government has completely rejected the “false allegations”, dismissing them as a “malicious falsehood”.

Well, the most powerful indication of Saudi’s financial links with ISIS can be seen in the cache of emails leaked from the office of Hillary Clinton, who was US Secretary of State from 2009 to 2013.

The messages, published by Wikileaks, contain an unambiguous statement by her campaign chairman, John Podesta:

“We need to use our diplomatic and more traditional intelligence assets to bring pressure on the governments of Qatar and Saudi Arabia, which are providing clandestine financial and logistic support to ISIL and other radical Sunni groups in the region.”

This wasn’t the first time US officials had made this claim. In 2009, Wikileaks published diplomatic cables from the US State Department which spelt out the same concerns.

“Donors in Saudi Arabia constitute the most significant source of funding to Sunni terrorist groups worldwide,” the documents said. “While the Kingdom of Saudi Arabia (KSA) takes seriously the threat of terrorism within Saudi Arabia, it has been an ongoing challenge to persuade Saudi officials to treat terrorist financing emanating from Saudi Arabia as a strategic priority …

“More needs to be done since Saudi Arabia remains a critical financial support base for al-Qaeda, the Taliban, LeT, and other terrorist groups, including Hamas, which probably raise millions of dollars annually from Saudi sources.”

A third Wikileaks file appeared to show a private speech that Hillary Clinton made in 2013. In it, she said: “The Saudis and others are shipping large amounts of weapons – and pretty indiscriminately – not at all targeted toward the people that we think would be the more moderate, least likely, to cause problems in the future.”

President Joe Biden, once spoke off-message by accusing Saudi Arabia and other Gulf states of pouring “hundreds of millions of dollars and tens of tons of weapons into anyone who would fight against Assad.” He explained: “The people who were being supplied were al-Nusra, and al-Qaeda, and the extremist elements of jihadis who were coming from other parts of the world …

“We declared [ISIS] a terrorist group early on. And we could not convince our colleagues to stop supplying them.”

In other countries, politicians have been more vocal about these concerns. For instance, in 2014, the Iraqi prime minister Nouri al-Maliki accused both Saudi Arabia and Qatar of supporting and funding terrorists.

However, just because the Saudi government is not doing enough to stop the flow of money to ISIS, that doesn’t necessarily mean the cash is coming direct from the government itself.

In fact, research by the Washington Institute said there was no credible evidence of this at the moment. This is probably because Saudi Arabia is fearful of the threat ISIS may pose to their own country, it said.

But the report added that Saudi government “has taken pleasure in recent ISIS-led Sunni advances against Iraq’s Shiite government, and in jihadist gains in Syria at Bashar al-Assad’s expense”.

It added: “It would not be surprising to learn of limited, perhaps indirect contact, logistical coordination to further Sunni positions in Syria and beyond, or leaking of funds and materiel from Saudi-supported rebels to ISIS.”

“Arab Gulf donors as a whole – of which Saudis are believed to be the most charitable – have funneled hundreds of millions of dollars to Syria in recent years, including to ISIS and other groups,” it said. “Riyadh could do much more to limit private funding.”

The reality of ISIS financing is complicated and messy. It’s not as simple as just donations from wealthy backers; research suggests the militants have made a fortune from oil reserves which it controls.

An investigation by the Financial Times in 2015 estimated they earned $1.5m a day from oil, and even sold to the very rebel groups they were fighting.

It’s worth noting that other countries are implicated too, such as Qatar and Kuwait. So although Saudi is accused of funding the group, it is not alone.