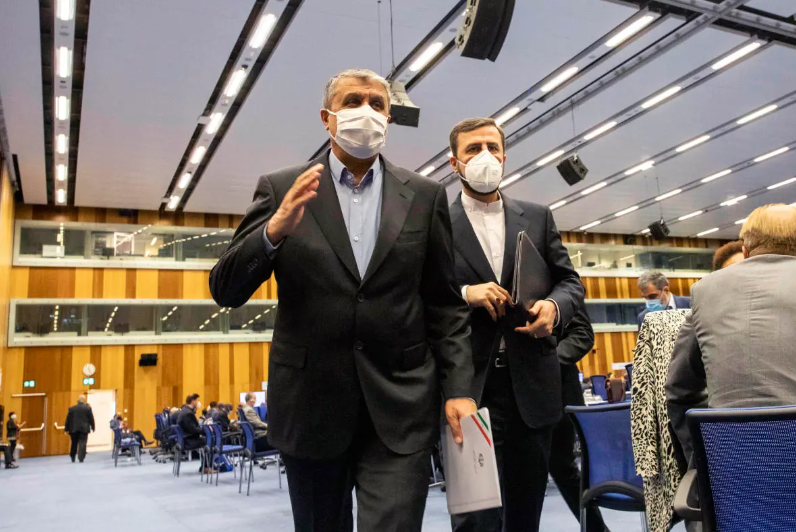 West News Wire: The team that accompanied Iran’s chief negotiator in the Vienna negotiations departed for the Austrian capital on Wednesday to pick up the discussions intended to revive the agreement and relieve sanctions.

In a tweet posted on Wednesday night, Ali Bagheri Kani urged the US to “take advantage of the opportunity” and said he was traveling to Vienna “to progress the negotiations.”

The deputy foreign minister added, “The onus is on those who violated the agreement and have failed to remove themselves from this legacy.” The US must take advantage of the generosity of the JCPOA partners; it is on to them to behave properly and maturely.

Nasser Kanani, a spokesman for Iran’s foreign ministry, stated earlier in the day that Bagheri and his team will be traveling to Vienna to continue the negotiations.

“In a couple of hours, the Iranian negotiating delegation is to leave for Vienna for the continuation of sanctions removal talks,” Kan’ani said in a statement.

The announcement came shortly after the European Union’s deputy foreign policy chief, Enrique Mora, said he was also flying to Vienna for the talks to revive the 2015 accord, officially known as the Joint Comprehensive Plan of Action (JCPOA).

“On my way to Vienna to discuss JCPOA back to full implementation,” Mora wrote on his Twitter page, saying the fresh talks would be held on the basis of a draft text proposed by the EU coordinator.

The former US administration led by President Donald Trump unilaterally withdrew from the JCPOA in May 2018, followed by the reinstatement of crippling sanctions on Iran under the so-called “maximum pressure campaign”.

After exercising “strategic patience” for one year, Iran gradually started to scale back its commitments under the deal in 2019, holding both the US and Europeans responsible for it.

The talks to revive the landmark deal and have sanctions on Iran lifted started in April last year with the participation of the remaining parties to the deal. While the parties noted progress in multiple rounds of talks, the indecisiveness shown by Washington prevented any significant breakthrough.

Last month, the talks moved to the Qatari capital of Doha in a different format, with Tehran and Washington holding indirect talks mediated by the European Union. The one round again failed to produce any desired result due to excessive demands of the US.

“This text represents the best possible deal that I, as a facilitator of the negotiations, see as feasible,” he wrote in an article published in The Financial Times at the time, saying, “It is not a perfect agreement, but it addresses all essential elements and includes hard-won compromises by all sides.”

In response, Iran’s lead negotiator took to Twitter on Sunday, saying Tehran has shared its proposed ideas to pave the way for “a swift conclusion of Vienna negotiations” aimed at “fixing the damaging complicated situation caused by the U.S. unilateral & unlawful withdrawal.”

“We work closely with our JCPOA partners, in particular the Coordinator, to give another chance to the US to demonstrate good faith & act responsibly. As Iran, we stand ready to conclude the negotiations in short order, should the other side be ready to do the same,” he wrote.

“The European Union’s proposal is a bit different from the previous proposals,” he said, adding that the new draft text has accommodated some of the Iran’s demands.

“In its new proposal, the European Union has shown lenience concerning some of Iran’s demands, and has adjusted its positions to some extent,” the lawmaker said.

“Of course, Iran is examining the proposal too, and would submit its conclusions to the opposite side soon,” he noted.

The ranking parliamentarian, however, said there were “one or two” remaining sticking points, which had to do with the issue of the sanctions.

Late last month, Iran’s top negotiator Ali Bagheri Kani said Tehran was ready to swiftly conclude the Vienna talks and give the United States another chance to act responsibly toward its contractual obligations under the 2015 accord.

Iran has presented its “proposed views, both on substance and form, to pave the way for a speedy completion to Vienna negotiations,” Bagheri Kani, who also serves as the country’s deputy foreign minister for political affairs, said in a tweet on Sunday.

“We collaborate closely with our JCPOA partners, in particular the Coordinator, to provide the US another chance to behave responsibly and in good faith. If the other side is prepared to do the same, Iran stands ready to wrap up the talks quickly, he continued.

The next round of negotiations to resurrect the 2015 nuclear agreement will take place in Vienna, according to a report in Reuters on Wednesday. Robert Malley, the US special envoy for Iran, is also anticipated to attend.