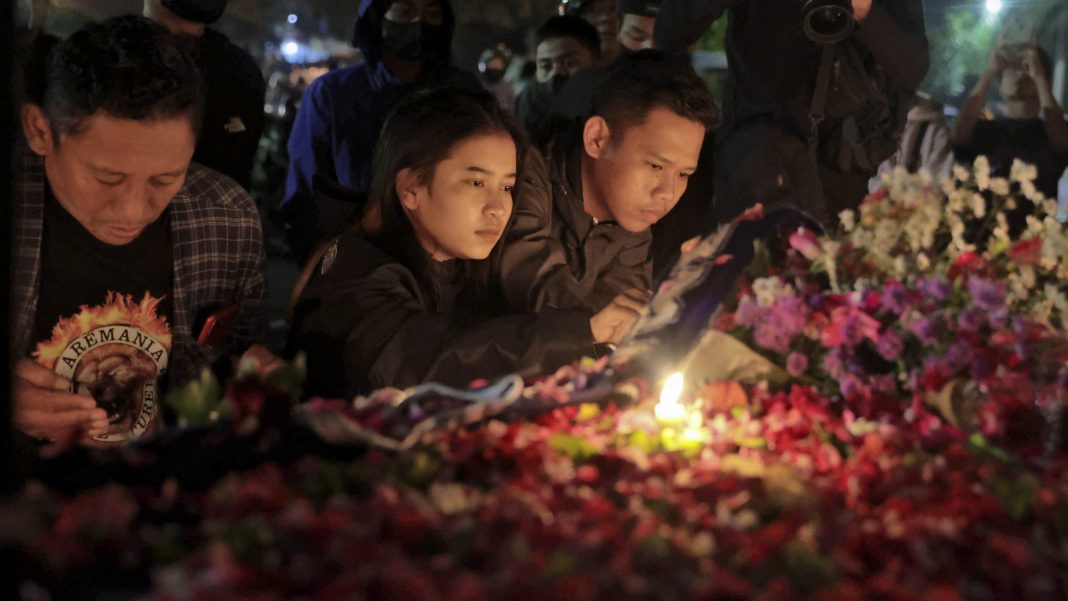 West News Wire: To look into a stampede that left 125 people dead, including over a dozen children, at a football stadium, Indonesia will set up an independent fact-finding committee.

Mahfud MD, the coordinating minister for political, legal, and security affairs in Indonesia, stated that the investigation into the tragedy that occurred in Malang on Saturday night after a match between bitter rivals Arema FC and Persebaya Surabaya FC would try to determine what happened and find those responsible.

A national police spokeswoman announced on Monday that the Malang police chief had been demoted from his job.

At a televised press conference, Dedi Prasetyo stated, “Based on the investigation conducted tonight the national police chief has decided to relieve Malang police chief Ferli Hidayat of his duties and replace him.”

The disaster began after Arema was beaten, the first time they had lost on home turf in 23 years.

As fans rushed onto the pitch, police fired tear gas, prompting panicked supporters to rush for the exit gates.

Some people suffocated in the chaos, while others were trampled to death. Two police officers were among those who died at the stadium, as well as at least 17 children in one of the worst disasters at a football stadium anywhere in the world.

Reihan Zailani, who was at the match, told news reporters that he saw “children die in front of his eyes” as people struggled to get away from the tear gas.

“People were scattered and running around trying to get out,” he said. “But the exit was locked and we were piling up there.” Zailani did eventually manage to get out but says police continued to fire tear gas even after they had escaped the stadium.

The match was a sell-out with at least 42,000 people in the stadium, even though Persebaya Surabaya fans were banned from the game because of the intense rivalry between the two teams in the east of densely-populated Java island.

Witnesses said the trouble started after Arema lost and fans started to go down to the pitch.

Read More
Tunisia may be barred from Qatar 2022 World Cup

“Everyone was panicking, it was chaos,” said Nanda Rizki, who went to the match with his brother and said there were many children in the crowd.

“People were running towards the exit, but the exit was locked, and they turned down the lights in the stadium. So the tribune [part of the stands] was dark, people were pushing each other trying to get out. Stepping over each other.

President Joko Widodo on Sunday ordered an investigation into the tragedy, a safety review of all football matches and “security” improvements.

“I deeply regret this tragedy and I hope this football tragedy will be the last in our country,” Widodo said.

FIFA President Gianni Infantino said the football world was “in a state of shock” over what had happened. The sport’s world governing body, which prohibits the use of tear gas in stadiums, has asked Indonesian authorities for a report on the tragedy.

“No one should lose their lives at a football match,” Amnesty International Indonesia Executive Director Usman Hamid said in a statement. “We call on authorities to conduct a swift, thorough and independent investigation into the use of tear gas at the stadium and ensure that those who are found to have committed violations are tried in open court and do not merely receive internal or administrative sanctions.”

Football is hugely popular in Indonesia, but IT has long been marred by violence and hooliganism.

Data from Indonesia’s soccer watchdog, Save Our Soccer, shows that 78 people have died in game-related incidents over the past 28 years.

Those accused are often associated with supporter groups that attach themselves to clubs, with the biggest boasting hundreds of thousands of members.

After he failed to return home, she found him at a local hospital being treated for his injuries. Suprianti hopes he will recover.