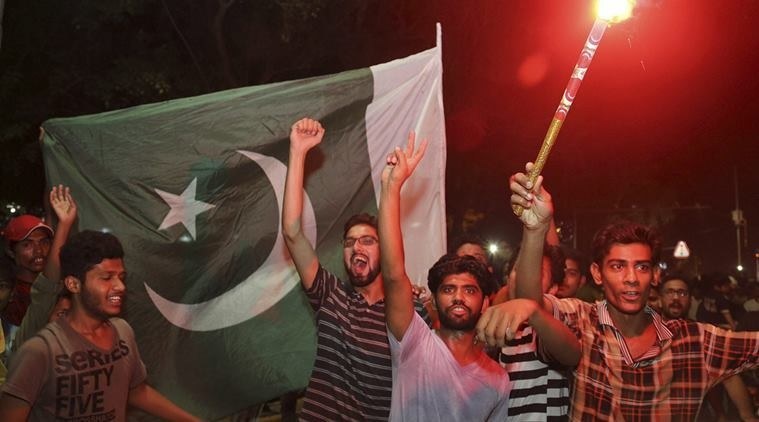 Police in the northern Uttar Pradesh state have arrested five out of seven people against whom cases were registered for celebrating Pakistan’s Oct. 24 win in Dubai.

The state chief minister’s office said on Thursday morning that a sedition law will be invoked against the individuals.

Shalabh Mani Tripathi, a media adviser to Chief Minister Yogi Adiyanath, told Anadolu Agency that orders have been issued for strict action against those who celebrated Pakistan’s win.

“Four such cases have been reported in the entire state,” he said.

Among those arrested in Uttar Pradesh, a stronghold of India’s ruling Bharatiya Janata Party (BJP), are three students from Indian-administered Jammu and Kashmir, who are studying at the Raja Balwant Singh Engineering Technical College in Agra.

Vikas Kumar, a top police official in Agra, confirmed that three students from Agra were arrested in Uttar Pradesh, adding that “sedition charges will be added to the case against them.”

In Uttar Pradesh’s neighboring Rajasthan state, a teacher who was fired from her job for posting a WhatsApp status hailing Pakistan’s win was also arrested on Wednesday. She was, however, later released on bail.

Earlier this week, police in Indian-administered Jammu and Kashmir filed criminal cases under a stringent anti-terror law against students of two medical colleges who reveled after Pakistan beat India by 10 wickets in the rivals’ inaugural match of the World Cup campaign.

Indian authorities’ actions have been condemned by many and sparked several calls for the cases to be withdrawn.

“This is just sports. Cheering for or supporting any team should not be construed with someone’s political ideology,” Nasir Khuehami, who runs a student association, told Anadolu Agency.

“These cases will have severe consequences for the students. This can ruin their future.”

However, Arun Gupta, a BJP spokesman, reaffirmed that such actions will not be tolerated or accepted.

“The issue is that if your team has lost, you should be sad about that. Why are you cheering for a team that is not yours? You’re either an Indian or you’re not,” he said.

Cricket matches between India and Pakistan, which have a decades-long political and military rivalry in South Asia, have long been highly charged affairs for the region’s cricket-crazed population.

Apart from the arrests, the rising vitriol triggered incidents of violence in parts of India, including an attack on students by fellow students in the northern state of Punjab.

Mohammed Shami, a Muslim member of the Indian cricket team, was also singled out in a barrage of abuse on social media, which has been resoundingly denounced by fellow cricketers, including from Pakistan, and people from all walks of life.​​​​​​​