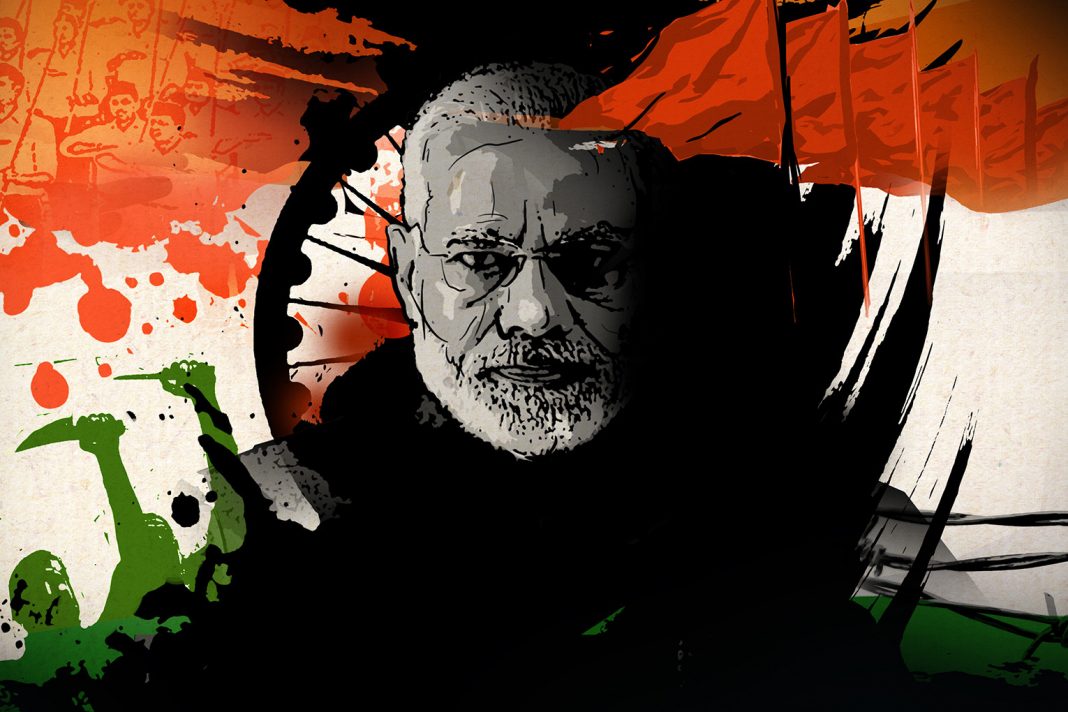 West News Wire: Authorities in Indian states ruled by Prime Minister Narendra Modi’s Bharatiya Janata Party (BJP) have begun bulldozing the homes, shops, and businesses of Muslims suspected of participating in anti-government protests in recent months. In their election campaigns, the Chief Ministers of these states proudly flaunted this policy.

This, in my opinion, is the point at which a deeply flawed, fragile democracy has openly and brazenly devolved into a criminal, Hindu-fascist enterprise with widespread popular support. It appears that we are now ruled by gangsters dressed as Hindu godmen. Muslims are the public’s worst enemy, according to them.

Pogroms, lynchings, targeted murders, custodial killings, untrue police “encounters,” and false imprisonment have all been used against Muslims in the past. Bulldozing their homes and businesses is only a new and highly effective weapon added to this list.

The bulldozer has been imbued with a divine, vengeful power in the way this phenomenon has been reported and written about. This menacing machine is being portrayed as a mechanical, comic-strip version of a mythical God slaying demons, with its huge metal claw that is used to “crush the enemy.” It has become the talisman of the new Hindu nation of vengeance. During his recent visit to India, Britain’s Prime Minister Boris Johnson posed next to one it’s hard to believe he had no idea what he was doing or who he was endorsing. What other reason could a head of state have for posing with a bulldozer during a state visit?

Government officials, for their part, claim that they are simply demolishing illegally built structures and are not targeting Muslims. A sort of cleanup mission for the city. Of course, that logic isn’t meant to persuade anyone. It’s intended to be a source of amusement as well as terror. Most Indians and the authorities are aware that the majority of construction in every Indian town and city is either illegal or quasi-legal.

Bulldozing Muslim homes and businesses for purely punitive reasons without warning and without the possibility of an appeal or hearing accomplishes several goals at once.

Prior to the bulldozer era, Muslims were punished by vigilante mobs and police, who either participated in the punishment or chose to look the other way. Bulldozing of properties, on the other hand, involves not only the police but also the municipal authorities, the media who must be present to amplify and broadcast the spectacle of demon-slaying and the courts, who must remain silent and uninvolved. “You’re on your own,” it’s supposed to say to Muslims. There will be no assistance. You don’t have an appeals court. Every institution that was once part of this old democracy’s checks and balances is now a weapon that can be used against you.”

Anti-government protesters from other communities’ properties are almost never targeted in this way.

For example, on June 16, tens of thousands of young men across North India went on a violent rampage in protest of the BJP government’s new army recruitment policy. They set fire to trains and vehicles, blocked roads, and even set fire to the BJP office in one town. However, the majority of them are not Muslim. As a result, their homes and families will be safe.

In both the 2014 and 2019 general elections, the BJP demonstrated convincingly that it does not require the votes of India’s 200 million Muslim population to win a majority in Parliament. As a result, we’re dealing with a form of disenfranchisement. This will have dangerous ramifications. Because once you’ve been disenfranchised, you’re no longer relevant. You fade into obscurity. You can be used and abused. This is what we are witnessing now.

Even after high-ranking BJP officials publicly insulted everything Muslims hold sacred, the party did not lose its core support base or receive significant criticism.

Muslims have demonstrated in large numbers in response to these insults. Because the incident occurred after so much violence and brutality, the protests were understandable. Except, as is customary, some of the protestors called for a blasphemy law, which the BJP would almost certainly support because it would criminalise almost all discussion of Hindu nationalism. It would effectively silence all criticism and stifle all intelligent debate about India’s political and ideological quagmire.

Individual protestors, including one from a powerful political party, the All India Majlis-e-Ittehadul Muslimeen (AIMIM), called for hanging and beheading, confirming every stereotype about Muslims that the Hindu right works so hard to perpetuate. There appears to be no way to communicate across the high walls of insults and death threats on both sides.

The polarisation that followed the protests has only strengthened the BJP’s position. Although the BJP spokeswoman who made the insult has been suspended from the party, her cadres have openly embraced her. Her political prospects appear to be promising.

We are currently experiencing the political equivalent of a scorched-earth policy in India. Everything is being destroyed, including institutions that have taken years to build. It’s mind-boggling.

Everything is being destroyed, including institutions that have taken years to build. It’s mind-boggling. A new generation of young people will be completely brainwashed, with no understanding of their country’s history or cultural complexity. The regime maintains a constant drumbeat of bigotry and hatred, fuelled by hate-spewing stock characters on both sides of the Hindu-Muslim divide, with the help of a media that includes about 400 TV channels, countless websites, and newspapers.