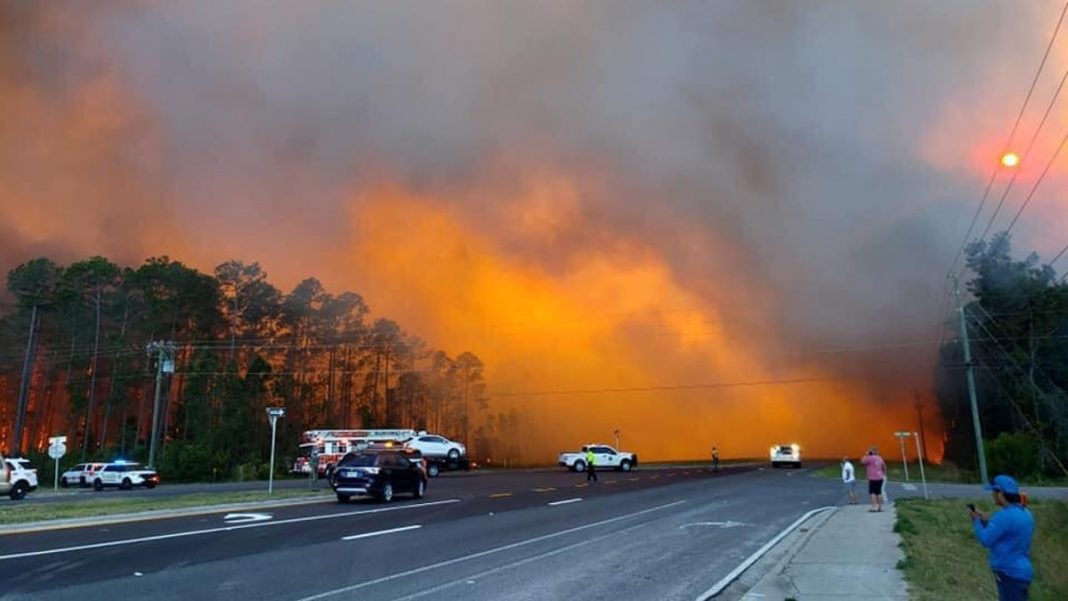 West News Wire: Hundreds of inhabitants in Florida were forced to flee their homes as a wave of wildfires surged over the area, igniting dead vegetation.

The fires in Florida’s Panhandle scorched 4,800 hectares (12,000 acres) of land on Monday and were only 10% contained near communities east of Panama City, according to Florida Forest Service spokesperson Joe Zwierzchowski.

During a press conference, he remarked, “We have another day of pretty sustained winds pushing fire toward these communities.” “By increasing cloud cover and humidity, we should be able to control some of the fire behaviour we’ve witnessed.”

There have been no reports of injuries or deaths.

“We have another day of pretty steady winds pushing fire toward these communities,” he said during a news conference. “Increased cloud cover, increased humidity should help tap down some of the fire behaviour we have seen.”

Michael was the first Category 5 hurricane to make landfall in the US since Hurricane Andrew in 1992, and only the fourth on record, when it tore through Mexico Beach and Tyndall Air Force Base in October 2018. The hurricane was directly responsible for 16 deaths and about $25bn in damage in the US, according to the National Oceanic and Atmospheric Administration.

It also left behind tonnes of shredded and uprooted trees in the Florida Panhandle, Florida Commissioner of Agriculture Nikki Fried said at the news conference.

“Hurricane Michael left an additional threat to our communities wildfires,” Fried said. “Wildfires are never easy control. This added fuel and dense pockets of vegetation from Hurricane Michael will increase the intensity of wildfires.”

So far, the fires have forced the evacuation of about 700 homes. A 120-bed veteran’s nursing home in Panama City was also evacuated due to the smoke, officials said.

More than 200 firefighters and emergency workers from around the Panhandle worked overnight to strengthen containment lines and protect homes.

Dry conditions in Florida have created elevated fire dangers, with 148 active wildfires burning across the state this year, including the 1,214-hectare (3,000-acre) Bertha Swamp Fire in neighbouring Gulf County, according to the Florida Forest Service.