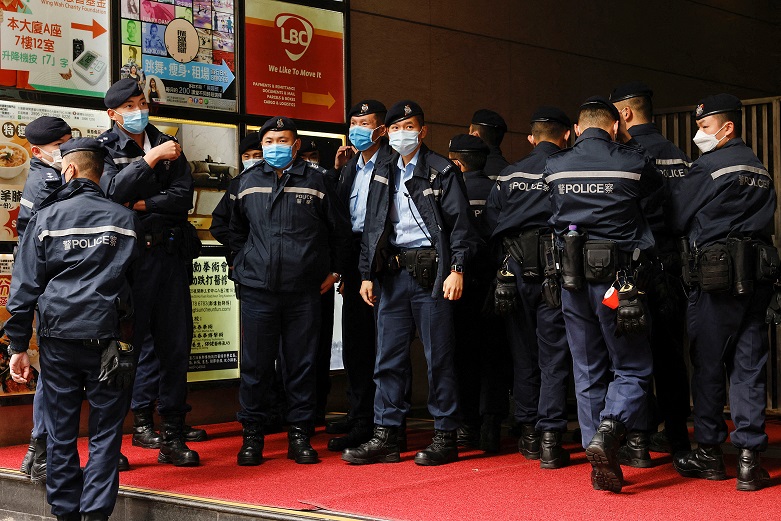 West News Wire: After arresting six people for conspiring to publish a seditious publication, Hong Kong police stormed the office of an online pro-democracy news outlet on Wednesday, the latest action in the city’s assault on dissent.

After the pro-democracy publication Apple Daily halted operations earlier this year, those arrested were linked with Stand News, one of the most vociferous pro-democracy news outlets in the city.

According to authorities, more than 200 officers were part in the search. Under a national security law passed last year, they had a warrant to take pertinent journalistic materials.

The six were arrested early Wednesday for conspiracy to print a seditious publication under a colonial era offenses ordinance, and searches of their homes were underway, according to police. Those found guilty face a maximum sentence of two years in prison and a fine of HK$5,000 (€570).

According to the local South China Morning Post newspaper, police arrested one current and one former editor at Stand News, as well as four former board members including singer and activist Denise Ho and former lawmaker Margaret Ng.

Police did not identify those who were arrested.

A Facebook post early Wednesday morning on Ho’s account confirmed that she was being arrested. A subsequent message posted on her behalf said she was okay and urged friends and supporters not to worry about her.

Early Wednesday, Stand News posted a video on Facebook of police officers at the home of a deputy editor, Ronson Chan, where they were investigating the alleged crime. Chan, who is also chair of the Hong Kong Journalists Association (HKJA), was taken away for questioning, the organization confirmed in a statement.

The arrests come as authorities crackdown on dissent in the semi-autonomous Chinese city. Hong Kong police had previously raided the offices of the now-defunct Apple Daily newspaper, seizing boxes of materials and hard drives to assist in their investigation and freezing millions in assets that later forced the paper to cease operations.

Stand News earlier this year said it would suspend subscriptions and remove most opinion pieces and columns from its website due to the national security law. Six board members had also resigned from the company.

The HKJA urged the city’s government to protect press freedom in accordance with Hong Kong’s mini-constitution, the Basic Law.

“The Hong Kong Journalists Association (HKJA) is profoundly disturbed that, within a year, the police have arrested top members of the media and raided the offices of news organizations carrying huge quantities of journalistic materials,” it said in a statement.

The arrests, according to Benedict Rogers, co-founder and CEO of the non-governmental organization Hong Kong Watch, are “nothing short of an all-out assault on Hong Kong’s press freedom.”

“When Hong Kong’s Basic Law guarantees a free press, it’s a symbol of how quickly this once magnificent, open, cosmopolitan city has devolved into little more than a police state,” he said.

The arrests on Wednesday came after sculptures and other artwork were removed from university campuses last week. The artworks advocated for democracy and honored the victims of China’s 1989 crackdown on democracy protestors in Beijing’s Tiananmen Square.