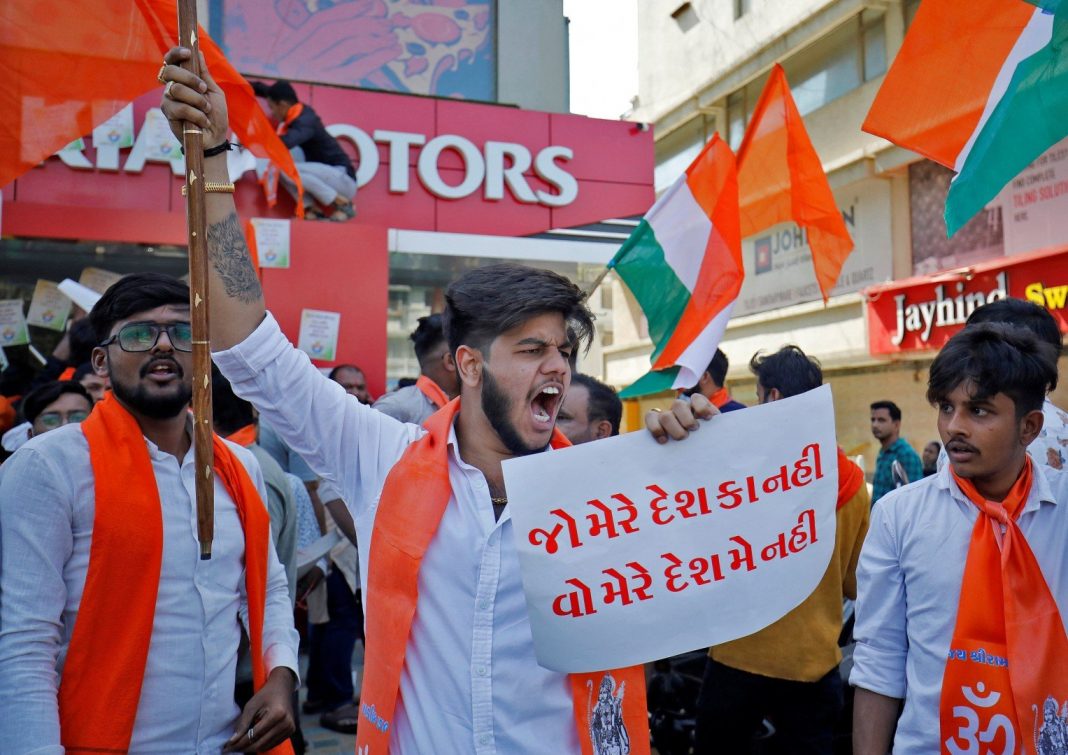 West News Wire: Hardline Hindu organizations in the Indian state of Gujarat have forced the closure of stores owned by several multinational corporations after their Pakistan-based subsidiaries posted statements on social media in favor of Kashmir.

The corporations used social media to post messages on February 5 in honor of Pakistan’s Kashmir Solidarity Day, which is marked every year to honour the sacrifices of Kashmiris fighting for self-determination, generating outrage among Indian social media users.

“These companies cannot be doing business in India and at the same time supporting Pakistan’s stand on Kashmir,” Dinesh Navadiya, national treasurer of VHP, told the reporters during a protest in the city of Surat.

Shouting slogans such as “Kashmir is Ours” and wearing saffron scarves, more than 100 members of Bajrang Dal also joined the protest one of several held in Gujarat, the home state of Prime Minister Modi.

The furore has highlighted the risks faced by companies operating in both the rivals India and Pakistan, which control parts of Kashmir but both claim the Himalayan territory in full.

The BJP for decades campaigned against the limited autonomy granted to Indian-administered Kashmir by India’s constitution. In August 2019, Prime Minister Modi scrapped Article 370 of India’s constitution that was the basis of Kashmir special status. New Delhi was supposed to control the region’s foreign affairs, defence and communications under the 1947 deal called Instrument of Accession. But over time, India diluted the Muslim-majority region’s autonomy.

Kashmir solidarity day Rights groups have accused the Modi government of trampling on civil liberties and arresting journalists and rights campaigners, as laws are passed that Kashmiris have said will go against the interest of the local population.

India has said Pakistan supports an armed rebellion against New Delhi’s rule in India-administered Kashmir that broke out in the 1990s. Pakistan has denied the charge and said it only provides diplomatic and moral support for the Kashmiri people.

“We want to make it clear to these companies and others that Kashmir is an inseparable part of India,” Rajput said.

South Korea’s Hyundai Motor Company said it deeply regrets any offence caused to Indians by an “unauthorised” tweet from the account of its Pakistan partner that expressed solidarity for the people of Kashmir.

The company is India’s second-largest car seller after Maruti Suzuki, selling close to half a million vehicles in the country in the last fiscal year and exporting more than a million units, making it India’s largest car exporter.

The social media posts triggered a diplomatic dispute, leading India to summon South Korea’s envoy over the matter last week. India conveyed the “strong displeasure of the government on the unacceptable social media post by Hyundai Pakistan”, ministry spokesperson Arindam Bagchi was quoted by the local Hindustan Times as saying.