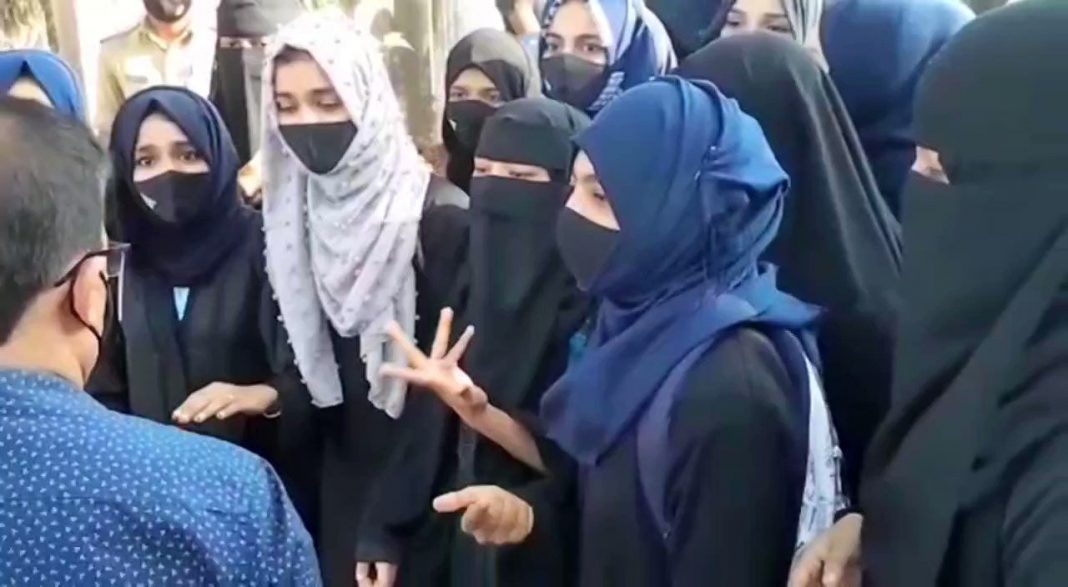 West News Wire: A video shared on Twitter showing a Muslim student wearing a hijab being heckled by a Hindu far-right crowd at a college in Karnataka state has sparked outrage amid growing protests against the state’s ban on Islamic headscarves.

Muskan Khan was surrounded by men wearing saffron scarves as she came at her college in Mandya and challenged the demonstrators, many of whom she claimed were outsiders, according to the viral footage.

Muslim students have been outraged by the ban on Islamic headscarves, which they claim is an attack on their faith, which is protected by India’s secular constitution, while Hindu right-wing groups have attempted to prevent Muslim women from entering educational institutions, causing communal strife.

“I was just there to submit an assignment; that’s why I entered the college. They were not allowing me to go inside just because I was [wearing] the burqa,” Khan later told India’s NDTV news channel.

“After that, they started shouting the slogan ‘Jai Shri Ram’. (Hail Lord Ram). Then I started to scream ‘Allah Akbar’ (God is great),” she said, adding that she would keep fighting for her right to wear the hijab.

“Ten percent [of the protesters] were from the college but [the rest of them] were outsiders,” Khan said.

The Karnataka government run by the right-wing Bharatiya Janata Party (BJP) on Tuesday announced shutting down of educational institutions for three days.

The standoff in Karnataka state  home to India’s IT hub of Bengaluru, has galvanized fears among the minority community about what they say is increasing persecution under the Hindu nationalist government of Prime Minister Narendra Modi.

Fresh demonstrations on Tuesday saw police fire tear gas to disperse a crowd at one government-run campus, while a heavy police presence was seen at schools in nearby towns.

Chief Minister Basavaraj Bommai from Modi’s BJP appealed for calm after announcing all high schools in the state would be closed for three days.

“I appeal to all the students, teachers and management of schools and colleges to maintain peace and harmony,” he said.

Students at a government-run high school were told not to wear hijabs last month. Since then Hindu far-right groups have tried to prevent hijab-wearing Muslim women from entering educational institutions in the state.

The government of Karnataka, where 12 percent of the population is Muslim, said in an order on February 5 that all schools should follow dress codes set by management.

BC Nagesh, the education minister of Karnataka who tweeted the order, said school dress codes had been set after reviewing court decisions from across the country to ban the hijab at educational institutions.

Campuses have seen escalating confrontations between Muslim students condemning the ban and Hindu pupils that say their classmates have disrupted their education.

“All of a sudden, they are saying you are not supposed to wear hijab, why did they start now?” said Ayesha, a teenage student at the Mahatma Gandhi Memorial College in Udupi. It seems some political reasons behind all this which current government wants to achieve.

Ayesha said a teacher had turned her away from her chemistry exam for wearing the garment.

“We are not against any religion. We are not protesting against anyone. It is just for our own rights,” she told news sources.

Tensions have frayed further in recent days in Udupi and elsewhere in majority Hindu Karnataka as students with saffron shawls  typically worn by Hindu far-right wing groups  thronged into classrooms to show their support of their schools’ hijab ban.

Fellow student Amrut, standing nearby among a crowd of Hindu boys wearing saffron shawls, said the dispute had unfairly prevented him from attending class.

“We had requested them not to wear hijab,” he said. “But today, they are wearing hijab. They are not allowing us to go inside.”

“Objectification of women persists  for wearing less or more. Indian leaders must stop the marginalization of Muslim women,” Yousafzai said on Twitter on Tuesday.

Critics have said Modi’s election in 2014 emboldened Hindu supremacists who see India as a Hindu nation and are seeking to undermine its secular foundations at the expense of its 200 million-strong minority Muslim community.

Opposition parties and opponents accuse the BJP-led federal and state governments of discriminating against religious minorities and risking inciting violence. Modi has defended his record, claiming that his economic and social programmes benefit the whole Indian population.

On Tuesday, the Karnataka High Court in Bengaluru heard a lawsuit filed by one of the girls, who claimed in her plea that wearing the hijab was a basic right to religion granted by the constitution.

While no final order was issued, the judge requested peace and quiet and said the petition will be heard again on Wednesday, according to one of the petitioner’s lawyers.