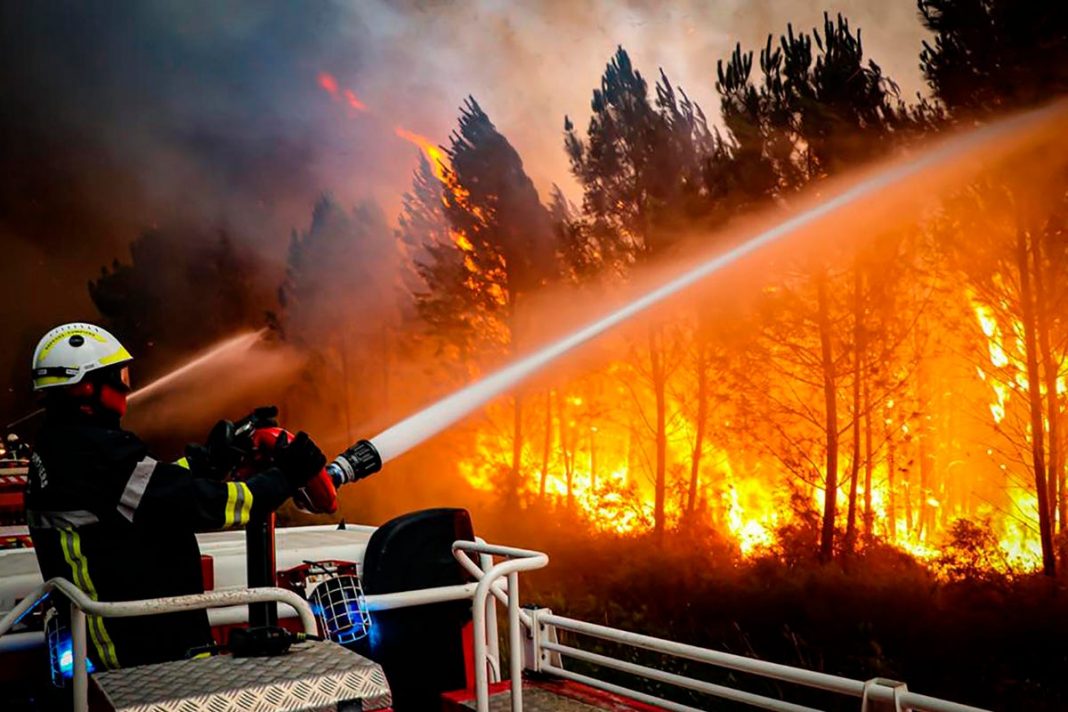 West News Wire: Hundreds of people have been evacuated from their homes as wildfires raged across France, Spain, and Portugal, prompting officials to issue health warnings for a new heatwave in the coming days.

Temperatures in parts of Europe were expected to reach 40 degrees Celsius (104 degrees Fahrenheit) as a slow-moving high-pressure area brought scorching air up from North Africa.

In Portugal, five regions in the center and north, where temperatures reached a July record of 47 degrees Celsius (117 degrees Fahrenheit) on Thursday before dropping, were on red alert again on Friday as more than 2,000 firefighters battled four major fires.

A plane that was battling forest fires in the Braganca region crashed on Friday near Vila Nova de Foz Coa in northern Portugal, killing its pilot, the civil defence said.

Portuguese health minister Marta Temido said on Thursday the health system faced a “particularly worrying” week due to the heatwave and said some hospitals were overwhelmed.

Between July 7 and July 13, Portugal registered 238 excess deaths due to the heatwave, the country’s DGS health authority said.

In neighbouring Spain, where temperatures were as high as 37C (99F) by 7am on Saturday, a fire that broke out on Thursday near the Monfrague national park, a protected area renowned for wildlife in the Extremadura region, continued to blaze.

Spanish authorities reported close to 20 fires still raging out of control with one near Mijas in the deep south, inland from regional capital Malaga, forcing some 2,300 people to evacuate their homes.

The country registered 84 excess deaths attributed to extreme temperatures in the first three days of the heatwave, according to the National Epidemiology Centre’s database.

This comes as the worst drought in more than 70 years reduced Italy’s longest river, the Po, to little more than a trickle in places, with temperatures expected to rise next week.

Across the Mediterranean, authorities said one person was found dead in northern Morocco as forest fires raged. Authorities also evacuated hundreds of people from more than a dozen villages in northwestern Morocco.