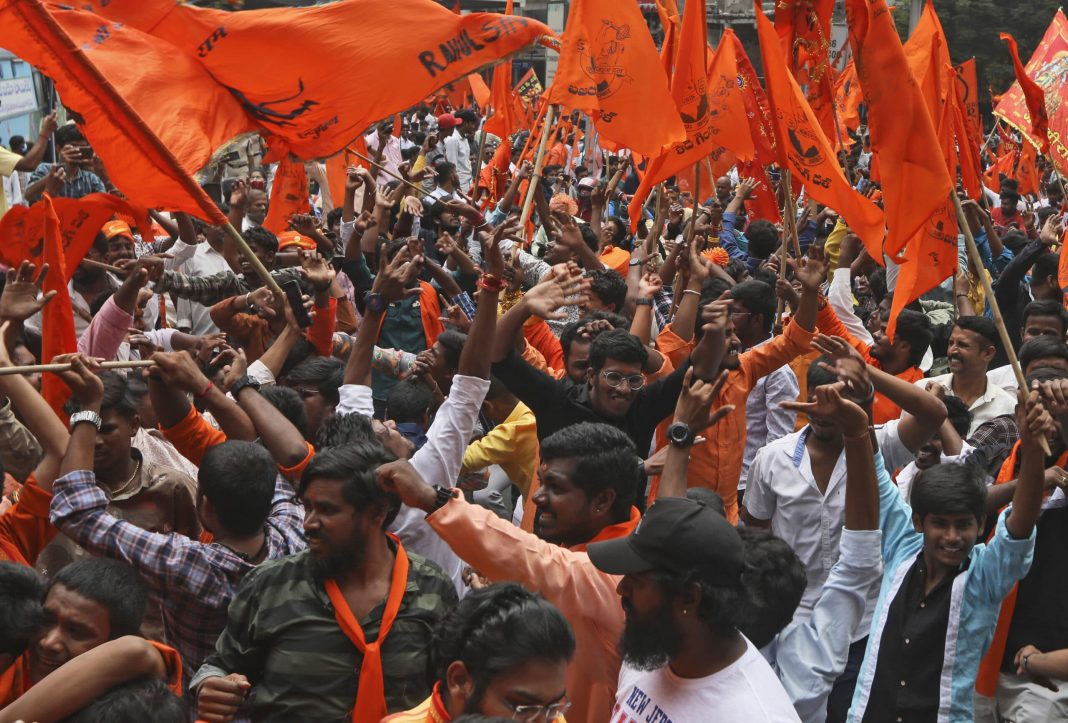 West News Wire: Provocative songs calling for violence were played by Hindu crowds, igniting a ferocious rage towards Muslims. It finished with Muslim areas that looked like a war zone, with broken glass, torched vehicles, and burned mosques littering the streets.

On April 10, a Hindu festival commemorating Lord Ram’s birth anniversary in Madhya Pradesh’s Khargone city turned violent after Hindu crowds with swords and clubs marched past Muslim neighbourhoods and mosques. Hundreds of them were seen dancing and cheering in unison to songs blasting from loudspeakers that included anti-Muslim rhetoric.

According to authorities, Hindus and Muslims began throwing stones at each other shortly after. The Muslims had been disproportionately harmed by the violence by the time it subsided.

It was the latest in a series of attacks against Muslims in India, where hardline Hindu nationalists have long espoused a rigid anti-Muslim stance and preached violence against them. But increasingly, incendiary songs directed at Muslims have become a precursor to these attacks.

They are part of what is known as “saffron pop,” a reference to the color associated with the Hindu religion and favored by Hindu nationalists. Many such songs openly call for the killing of Muslims and those who do not endorse “Hindutva,” a Hindu nationalist movement that seeks to turn officially secular India into an avowedly Hindu nation.

For some of the millions of Indian Muslims, who make up 14% of the country’s 1.4 billion people, these songs are the clearest example of rising anti-Muslim sentiment across the country. They fear that hate music is yet another tool in the hands of Hindu nationalists to target them.

“These songs make open calls for our murder, and nobody is making them stop,” said Mansuri.

The violence in Khargone left one Muslim dead and the body was found seven days later, senior police officer Anugraha. P said. She said police arrested several people for rioting but did not specify whether anyone who played the provocative songs was among them.

India’s history is pockmarked with bloody communal violence dating back to the British partition of the Indian subcontinent in 1947. But religious polarization has significantly increased under Prime Minister Narendra Modi’s Hindu nationalist government, with minority Muslims often targeted for everything from their food and clothing style to inter-religious marriages.

The hate-filled soundtracks have further heightened tensions, but the creators of these songs see them as a form of devotion to their faith and a mere assertion of being a “proud Hindu.”

“India is a Hindu nation and my songs celebrate our religion. What’s wrong with that?” said singer Sandeep Chaturvedi.

Among the many songs played in Khargone before the violence, Chaturvedi’s was the most provocative. That song exhorts Hindus to “rise” so that “those who wear skull caps will bow down to Lord Ram,” referring to Muslims. It goes on to say that when Hindu “blood boils” it will show Muslims their rightful place with their “sword.”

For Chaturvedi, a self-avowed Hindu nationalist, the lyrics are not hate-filled or provocative. They rather signify “the mood of the people.”

“Every Hindu likes my songs. It brings them closer to their religion,” he said.

The day violence struck Khargone, T. Raja Singh, a lawmaker from Modi’s Bharatiya Janata Party, led a similar procession of Hindu devotees in southern Hyderabad city and belted out a self-composed song that made veiled references to the removal of Muslims from the country. Police charged him with “hurting the religious sentiments of people.”

Similar songs that called for Hindus to kill those who do not chant “Jai Shri Ram!” or “Hail Lord Ram,” a slogan that has become a battle cry for Hindu nationalists, were also played in front of mosques in multiple Indian cities on the same day. They were followed by a wave of violence, leaving at least one dead in Gujarat state.